“I was raised by the people Angel hurt the most. My duty to them was the first thing I was ever taught. I didn't come here to hurt anyone. I lied to you because I thought it was the right thing to do. I didn't know what would happen. I didn't know I was going to fall in love with you.”
―Jenny Calendar[src]

Jennifer "Jenny" Calendar, born Janna, was a computer science teacher at Sunnydale High School, a technopagan, and Scooby Gang ally. While she developed a relationship with Rupert Giles, she was revealed to be a member of the Kalderash sent to watch over Angel, who eventually killed her after losing his soul.

Jenny was a computer science teacher at Sunnydale High, whose modern approach did not sit well with the technophobic Rupert Giles. She called herself a technopagan and was a member of a cyber-coven. Jenny assisted the Scooby Gang and, as they worked together against evil, Jenny and Rupert gradually fell in love.

Jenny's teaching methods and interests were at odds with, and seemed to infuriate, Giles. Her abilities with computers enabled her and Giles to complete the Circle of Kayless ritual within the internet to get rid of Moloch the Corruptor, a demon that had infected computers. She later approached Giles after she becomes anxious over several signs of an impending apocalypse she'd became aware of.[1]

Giles soon told her the truth about the Master's plan and Buffy Summers's true identity as the Slayer. Jenny was present when the Hellmouth was briefly opened during Buffy's battle with the Master.[2] Because she was of close distance to the Master at the time of his death, Jenny was kidnapped by the remaining members of the Order of Aurelius and almost had her throat slit as part of a revivification ritual to revive their leader before Buffy intervened and destroyed them all.[3]

Jenny's flirtation with Giles gradually became a slow-burning romance. However, the romance was hindered when Giles' past came back to haunt him and Jenny was possessed by the demon Eyghon the Sleepwalker Giles had summoned in his youth.[4] In the aftermath, Jenny avoided Giles for some time, but she was eventually ready to forgive Giles and the two of them rekindled their romance.[5]

After Angel lost his soul, Jenny disclosed that she was part of the Kalderash people, who had cursed the vampire with his soul and years later sent Jenny to watch over him. Jenny was not told that Angel would lose his soul, but the Scooby Gang were still angry that she had concealed her identity.[6] She decided to make it up to Buffy by attempting another restoration and translated the spell using a computer. However, Drusilla sensed Jenny's plan and warned Angel, who tracked down Jenny, destroyed her computer and printer, and snapped her neck, killing her. Angel left Jenny's dead body in Giles's bed with a trail of romantic symbols leading to the scene.[7]

Giles was devastated and sought revenge by trying to kill Angel as he felt that he could not live without her. Xander viewed Jenny's murder as evidence that Angel was beyond redemption. After Buffy rescued Giles from his ill-conceived act of revenge and visited the grave of the ill-fated Jenny, Buffy revealed that due to the loss, she was finally ready to slay Angel.[7]

However, Angel missed Jenny's disc version of the ritual, and some time later Buffy and Willow accidentally found it again, surprising them as Jenny had told them there was no way to restore Angel's soul. The gang ultimately decide to try it, noting that it seems to have been Jenny's last wish. While the first attempt fails,[8] Willow is ultimately able to complete Jenny's work and restore Angel's soul.[9] Meanwhile, Drusilla manipulated a badly tortured Giles into seeing her as Jenny, and revealing what was needed to awake the demon Acathla.[9]

When the Scoobies later discovered that Angel had been resurrected, Xander spitefully reminded Buffy of her failure to stop Angel from killing Jenny when she had the chance. However, both Buffy and Angel won back some good faith and acceptance among the gang during the subsequent scuffle over the Glove of Myhnegon.[10] On Christmas Eve 1998, the First Evil assumed Jenny's form to torment Angel into killing Buffy or himself.[11]

At some point, Giles sacrificed his memory of the day he fell in love with her, in order to bind a Plagiarus demon that was possessing a little girl.[12]

Proceeding the destruction of Sunnydale, Watcher Duncan Fillworthe was confronted by Giles who discovered he had been feeding the newly activated Slayers to a demon. In response, Duncan insisted that the Slayers, especially Buffy, deserved to die for betraying the Watchers Council, reminding Giles that Buffy's relationship with Angel resulted in Jenny's death.[13]

Years later, Buffy listed Jenny, Tara Maclay, Anya Jenkins, and Giles as reasons to agree with her father and his fiancee about her being too dangerous to be around, indicating she still felt responsible for each of these deaths.[14]

As a computer science teacher at Sunnydale High, Jenny was a technology expert. She was notably able to write a program that was able to translate a lost language, something that no-one had been able to do for a long time, not even her own people.[7]

Jenny had some proficiency in the dark arts, considering herself a technopagan rather than a witch, saying she didn't have the power of a witch.[1] Willow noted Jenny wasn't a practicing witch, but she did "dabble" in witchcraft.[8] As a result, Jenny displayed great knowledge of the occult and was able to cast the Circle of Kayless online with Giles' help.[1] She also seemed to believe herself capable of the Ritual of Restoration, something that was beyond Giles despite his years of study of the occult.[7] Jenny was also able to cast bones for divination and recognize portents of an apocalypse.[1] Apparently she had several spells she could and would cast as when she and Buffy found the Ritual of Restoration, Willow called it "one of" Jenny's spells.[8] 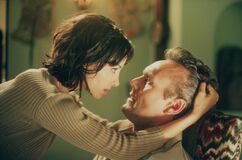 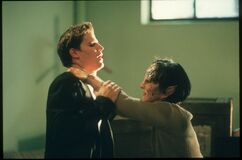 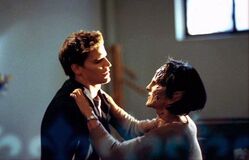