"Into the Woods" is the tenth episode of the fifth season of Buffy the Vampire Slayer television show, and is the 88th episode in the series. Written and directed by Marti Noxon, it originally broadcast on December 19, 2000 on The WB.

ONCE BITTEN — Spike disrupts Buffy's one moment of peace after her mom's successful operation to expose Riley's late nights spent in the arms of a vampire, sending an upset and bewildered Buffy into a tailspin and putting their relationship in turmoil.[1]

At the hospital, the Scooby Gang awaits news from Dr. Aaron Kriegel about Joyce's surgery, and they are all relieved when the surgery is a success. Dawn spends the night with Xander and Anya so that Buffy and Riley can have some private time.

With the house to themselves, Buffy and Riley spend a romantic evening together, and Riley commends her on how she remained calm and didn't cry. Buffy tells him she cried a lot, and Riley is once again upset that she refused to open up towards him. As Buffy lies asleep after some lovemaking, Riley sneaks out of the house. Spike, having been on his typical nightly vigil, secretly follows Riley to an old building.

Buffy spends the day with her mother in the hospital, when they discuss Joyce's wig options and Buffy's relationship with Riley. At night, Spike enters Buffy's bedroom and wakes her up to show her what Riley has been doing. Buffy is shocked to find him in the arms of a vampire, being fed upon. Riley sees her and Buffy runs away.

As Riley arrives his apartment, where he finds Graham and Major Ellis waiting for him. They offer Riley a position in the army's new anti-demon organization, assuring him that they are nothing like the governmental Initiative and exist only to stop demons, not study them. They tell him they'll ship out to Central America in the next day, at midnight.

At the Magic Box, Buffy storms in and demands information about humans paying vampires to bite them. Giles and Anya confirms the existence of vampire brothels, where humans get off on the rush of the experience and the danger the vampire might go too far. Buffy is angry that Giles didn't tell her about this kind of place, but Giles explains he didn't know this was going on in Sunnydale and, even if he did, he may not have told her because the "victims" are willing and she should remain focused on more imminent threats, like Glory. Buffy refuses to back down and gets even more agitated when Xander suggests waiting for Riley. Arriving at the nest, Buffy and the others find the building empty, the vampires worried that Buffy would return. Giles suggests the vampires will now be lying low, but Buffy is determined to find them and sets the building on fire, leaving everyone certain something is wrong.

Riley arrives at Spike's crypt furious that he allowed Buffy to see the truth and, after throwing the vampire around a bit, he stakes him. Riley then reveals that the stake is plastic and his actions were only a warning. Spike maintains that Riley has no future with Buffy, and the two rivals eventually share a drink, discussing how they both love her, but she doesn't return the feelings for either of them. Spike tells Riley that he is generally jealous of his position of intimacy with Buffy, although sometimes he wonders if Riley's situation is worse, being so close to Buffy while not actually having her. However, he ultimately declares that Riley has the better deal. Riley asks Spike if he really thinks he has a shot with Buffy. Spike responds in the negative, but says that a fellow's got to try — he's got to do what he can.

Buffy releases her aggression on a punching bag in the Magic Box's training room, until Riley shows up determined to talk to her. He tells her he started his late-night vamp activities because he wanted to know what Buffy felt when she was bitten by Dracula. Riley tells her that the vampires needed him and Buffy didn't, reminding her that she didn't ask for his help when her mother was ill and she chose to shoulder the whole burden herself, instead of letting him share it with her like he is supposed to. After Buffy tries to convince him that she's given him everything she has, Riley says that he doesn't believe her, and tells her about the offer to return to the government. He is going to leave Sunnydale unless she can give him a reason to stay.

The vampires from the nest surround a distraught Buffy as she leaves the shop alone. She stakes all eight of them, including the vampire she had seen drinking from Riley.

Xander witnesses the slaying and confronts Buffy, not willing to let her hide from her problems. He shows her the truth that she's been ignoring: that Riley has given her everything, and risked everything for her, while she has treated him as a rebound after Angel's departure, and how she's treated him as "convenient", expecting him to be there when she needs him and to disappear when she doesn't. She tries to change the subject by accusing Xander of treating Anya as a mere convenience, but Xander stays on point, telling her that Riley is the kind of guy that comes around once in a lifetime and that she has to decide if she's really willing to lose him for good. Xander gets through to Buffy, and she takes off.

Although she runs as fast as she can, Buffy is unable to get to the heliport in time to stop Riley from leaving. The helicopter takes off with Buffy on the landing pad, calling after Riley. He stares in the other direction, leaving without knowing that she had tried to reach him.

After his talk with Buffy, Xander goes to Anya and declares to her how much he loves her. 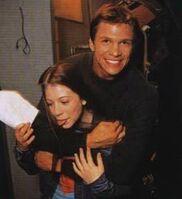 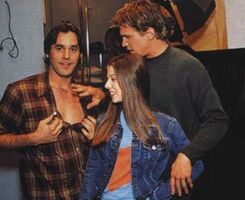 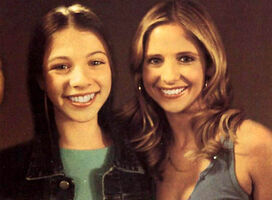 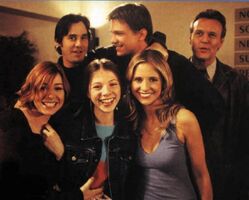 Retrieved from "https://buffy.fandom.com/wiki/Into_the_Woods?oldid=231198"
Community content is available under CC-BY-SA unless otherwise noted.