"Intervention" is the eighteenth episode of the fifth season of Buffy the Vampire Slayer television show, and is the ninety-sixth episode in the series. Written by Jane Espenson and directed by Michael Gershman, it originally broadcast on April 24, 2001 on The WB network.

FULL OF LOVE — Buffy travels to a sacred location on a solemn quest guided by the first slayer with the hopes of uncovering why she has become emotionally paralyzed and to help regain her focus towards slaying. Back in Sunnydale, unable to have the real thing, Spike builds a Buffy robot, who is a picture-perfect replica and so devoted to the rogue that it leaves the Scooby gang reeling and Glory's minions convinced he is the Key.[1]

Buffy and Dawn are trying to settle into a new routine after their mom's death, which Buffy discusses with Giles following dinner one evening. Giles proposes to Buffy that she resumes her training, but she is unsure despite the progress she had been making in mastering the true abilities of the Slayer. Asked for a reason, Buffy confesses her worry that the more she learns, the less human she feels worrying that people don't know how much she cares about them. In particular, she worries that Joyce didn't know how much Buffy loved her. Giles suggests he and Buffy go to a sacred location in the desert so that she can undergo a vision quest. When they arrive, Giles performs a ritual to call upon the Guide. A mountain lion appears and directs Buffy into the desert, which she recalls from her dream.

Glory orders her minions to watch the Slayer and see who is new and special in her life, as that person is likely to be the Key. That night, one of the minions watches the gang through a window; Dawn secretly takes Anya's earrings from a table.

Spike receives his robot from Warren, who quickly leaves town. In his crypt, Spike and the Buffybot pretend to fight, which inevitably leads to sex. While Spike is sleeping, the Buffybot heads out to patrol for vampires. She runs into Xander and Anya in patrolling in Restfield Cemetery and they believe her to be Buffy, but are puzzled because she is acting strangely — she didn't even ask about Dawn. Turning back to make sure Buffy is okay, Xander and Anya witness Spike and the Buffybot having sex. Xander and Anya are shocked and they go to his apartment to discuss with Willow and Tara what they saw. Unbeknownst to them, Glory's minions also witness Spike and Buffy, and they conclude that Spike is the Key, and they rush back to tell Glory.

At Xander's apartment, the Scoobies are horrified and disturbed by Buffy's behavior, and Xander goes back to confront Spike in his crypt. Spike has the Buffybot hide from Xander. He tells Spike that he's taking advantage of Buffy during a difficult time. While they argue, Glory's minions show up, knock Xander unconscious, and take Spike. Glory is upset when she sees Spike, as she knows a vampire cannot be the Key. The minions insist that they saw Buffy protecting him ahead of the others, and Glory reasons that Spike may know something. She decides to torture the information out of him.

Buffy wakes to find her guide in the form of the First Slayer on the opposite side of a large fire. The Guide advises Buffy that love is at the center of all Slayers, and that love will bring Buffy to her gift. When Buffy asks "What gift?" the Guide tells her death is her gift. Buffy insists that death is certainly not her gift, as she knows the pain that it can cause after losing her mother and doesn't want to offer it to anyone. The Guide states that Buffy's question has been answered, and disappears.

Worried about Spike, the Buffybot ignores the unconscious Xander at the crypt and goes to Xander's apartment for help. Willow sternly talks to the Buffybot (whom she mistakes for Buffy) about her sexual relationship with Spike. Xander comes home and fills everyone in about Spike being taken by Glory's minions. Realizing that Glory now has a captive who knows that Dawn is the Key, the gang goes to Buffy's house to get weapons so they can either retrieve Spike before he can reveal Dawn's secret, or do what must be done to keep him from talking.

When the Buffybot goes upstairs to change, the real Buffy enters, and the gang thinks it's the same Buffy they've just been talking to. The Buffybot returns from upstairs, and, confronted with two Buffys, the gang gets even more confused, but Buffy realizes right away that it's a robot that was likely built by Warren. She's indignant that the others were fooled at all, and all are disgusted when they realize the Buffybot's purpose. Buffy is informed of Spike's situation and decides to head out and kill him to prevent him from revealing the truth about Dawn to Glory, but they don't know where Glory is operating from. The only lead Buffy has is the area where she killed Glory's demonic snake, so they start searching from there.

Meanwhile, Glory is torturing Spike, who refuses to tell her the Key's location and subjects her to a sequence of insults. He manages to escape through the elevator, where he finds the Scooby Gang (plus the Buffybot) waiting. They fight off Glory's minions and leave the mansion with him, but the Buffybot is damaged and rendered inactive.

At the Magic Box, Willow examines the Buffybot and determines that she'd easily be able to fix it, but says she won't after getting a look from Buffy. Giles and Xander arrive at the shop, having dumped Spike back at his crypt. They report that they have been unable to get any hard information out of Spike as to whether or not he exposed Dawn, largely because he was severely beaten and barely conscious. Though disgusted by the Buffybot, Xander feels a bit of sympathy for him because he lost his favorite toy, but also points out the fact that Spike got a severe thrashing. This makes Buffy thoughtful.

In his crypt, Spike is resting, beaten and bloody. The Buffybot arrives and asks him what happened. He tells her he didn't tell Glory about Dawn, so the Buffybot says she's going to tell Glory, but he stops her. She asks Spike why they shouldn't give Glory the information she wants, and Spike explains that the real Buffy would be destroyed if anything ever happened to Dawn, and he would rather die than live with Buffy in so much pain. The Buffybot leans over and kisses Spike on the lips. Spike pulls back as he suddenly realizes it is the real Buffy pretending to be the Buffybot. Buffy makes it clear that the robot was disgusting, but tells him what he did for them was real, and she won't forget it. She then departs, leaving Spike staring after her. 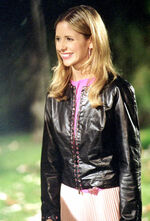 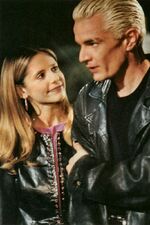 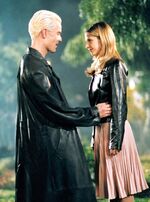 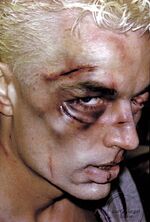 Retrieved from "https://buffy.fandom.com/wiki/Intervention?oldid=226152"
Community content is available under CC-BY-SA unless otherwise noted.