"Innocence" is the fourteenth episode of the second season of Buffy the Vampire Slayer television show, and the twenty-sixth in the series. Written and directed by Joss Whedon, it originally broadcast on January 20, 1998 on The WB network.

THE CONCLUSION OF A SHOCKING TWO PART EPISODE — After Buffy shares an intimate moment with Angel which extinguishes his human soul, she is left with the realization that she must destroy the now-evil Angel who has transformed into his previous persona of Angelus. Meanwhile, Giles' relationship with Jenny Calendar takes on a new twist when he discovers that she is a member of the gypsy family who gave Angel his human soul, and Willow's hopes of a relationship with Xander are dashed when she discovers Xander and Cordelia's secret romance.[1]

After having sex with Buffy earlier that night, Angel escapes into the alley with a piercing pain in his chest. When a woman tries to help him a few minutes later, he immediately, and gleefully, kills her.

In the factory, Spike and Drusilla are waiting as the Judge gathers his strength. Suddenly Drusilla gets a vision that initially causes her pain, but she then starts smiling as she realizes something good is coming for them.

Buffy wakes up and, finding Angel gone, quickly gets dressed and leaves to find him

In the factory, Drusilla is naming all the stars in the sky (the same name) when suddenly Angelus enters, much to Spike's surprise and anger. Not knowing about the transformation, Spike quickly sets the Judge on Angel. Spike and Drusilla wait for the Judge to burn him, but nothing happens. Confused, they ask what's wrong and Judge responds that there is nothing to burn… He is clean of humanity. Spike and Drusilla are amazed as they realize Angel's soul is gone and he is one of them again.

The two can barely believe what's happened. Drusilla dances around in celebration at Angelus returning home, and even Spike is pleased to see his mentor is back to his old evil self and makes a remark about how he hated seeing Angel as the Slayer's "lapdog." The couple invite Angelus to join them in using the Judge to destroy the world, and while he's happy to participate he asks them to hold off for a day as he wants to get revenge on Buffy first. Drusilla realizes that Angelus really wants to make Buffy suffer, and Angelus tells him that she made him "feel like a human… That's not the kind of thing you just forgive."

In the library, the gang are worried about Buffy and Angel since neither reported in the previous evening. Thinking they may have been captured, Willow and Xander tell everyone to prepare to visit the factory before Buffy walks in looking for Angel.

While researching a way to defeat the Judge, a demon whom "no weapon forged" can harm, Xander and Cordelia get caught kissing in the library by a crushed and furious Willow, who tells Xander that he'd rather be with someone he hates than her. She runs out in distress.

In Angel's apartment, Buffy finds Angelus and tries to talk to him about the previous night. However, intent on emotionally breaking her, Angelus makes several cutting remarks about the previous night, making it seem like he was just using her, and reminding her that it wasn't his first time. Buffy becomes upset at this sudden change and tries to reach the man she knew, but Angelus just half-heartedly promises to call her. Buffy is left distraught.

Jenny visits her uncle Enyos again, who informs her that it's too late: Angel's suffering has ended and his soul is gone.

At school, Willow returns and talks to Xander. She makes it clear she doesn't understand why he's with Cordelia — and doesn't want to — but realizes that there are bigger problems right now. They discuss the Judge and Xander confirms there's no new information.

Suddenly the lights go out and Willow and Xander worry before they see Angelus, hidden in the dark. He sends Xander to get the others and invites Willow to him with the promise of "showing her something." Willow starts to walk towards him, when Jenny arrives and tells Willow to get away. However, Willow doesn't leave quickly enough and Angelus grabs her by the neck, ready to kill her. Buffy arrives, and Angelus makes it clear that he's evil now and intends to kill all her friends as a message. However, Xander manages to get behind Angelus and shoves a cross in his face, causing him to let Willow go. Buffy takes the chance to attack in order to save Xander, but Angelus grabs her and forcibly kisses her, promising that things are about to get interesting. He leaves, and Buffy is left devastated over what has just happened.

In the library, the gang discuss this alarming turn of events. Willow tries to comfort Buffy, but then she realizes that Jenny knew Angel had turned before he revealed himself. Jenny lies that she saw his face in the darkness. Giles knows that something set off this transformation, and Buffy realizes that it was having sex with Angel that caused him to lose his soul. Buffy, overwhelmed by what's happening, leaves in distress as Willow realizes the two slept together.

Xander tells the others that he has a plan to defeat the Judge but he needs Cordelia's help for it to work. He mentions that they also need transport, and Willow tells him that they can use Oz's van. Xander refuses to tell Cordelia her part in the plan, and they agree to meet later. As for Buffy, Willow and Jenny decide that she needs some time alone. Everyone agrees, hating to think what Buffy is going through.

Buffy returns home and attempts to hold herself together, but after seeing the cross that Angel gave her and his ring still on her finger, finally suffers an emotional meltdown and collapses onto her bed, sobbing uncontrollably. Falling asleep, Buffy has another dream where she's initially with Angel making love before standing in a graveyard with him and Jenny, and Buffy realizes that Jenny knows more than she's letting on. The next day, a furious Buffy confronts Jenny by slamming her on a desk, and although Giles tries to stop her, Jenny shocks him when she admits that she is a member of the clan that originally cursed Angelus. Reluctantly, she confesses that it was a moment of total happiness that caused him to lose his soul. Buffy tells her to curse Angel again, but Jenny explains that the magic is long since lost to her people. When Buffy, Jenny, and Giles visit Enyos for answers, they find that Angelus has brutally murdered him, leaving the message "Was it good for you too?" daubed in blood. Giles tells Buffy that Angelus is trying to make it harder for her, but Buffy feels that he's just making it easier, knowing she'll have to kill him.

After being driven there by Willow and Oz, Xander and Cordelia sneak into a military base. When a soldier confronts him, Xander claims that he's giving Cordelia the "tour," a.k.a. looking to "turn her on" by making out near weaponry. He pretends he's going to tell the soldier's superior that he's not in regulation, and that convinces the soldier to leave them alone for a few minutes. Cordelia asks him where he got all the knowledge he just used, and Xander admits that all the knowledge he gained from turning into a soldier on Halloween is still with him. The two then steal a large box. In the van, Willow asks Oz if he wants to make out. Oz tells her that he is looking forward to kissing her but declines, as he realizes she only wants to kiss to make Xander jealous. As a result, Willow's respect and feelings for Oz grow.

The four return to the library with their "present" for Buffy. When Jenny tries to help, both Buffy and Giles order her to leave, emotionally hurt over the secrets she's been keeping.

After Xander gives Buffy a crash course in how to work her new "present," the gang head to the factory only to find it seemingly empty. Spike is hiding, only because he knows he's no match for them in his weakened state. They realize that Angelus, Drusilla, and the Judge are making their move, but don't know where they're going. They work out the Judge will go somewhere with a lot of people, but can't figure out where. Oz suggests a place: "If I were gonna line up [to be massacred], I know where I'd go."

Angelus, Drusilla, the Judge, and a gang of vampires arrive at a mall multiplex filled with people. Angelus has the exits sealed, and the Judge starts to burn everyone inside. At the last second Buffy shoots him with an arrow, trying to distract him and temporarily saving the mall-goers. The Judge is unconcerned, and reminds her that "no weapon forged" can kill him. Buffy shows him times have changed and pulls out her "present," which is actually a rocket launcher. Angelus and Drusilla realize what is about to happen and dive out of the way. The Slayer prepares the weapon, and a confused Judge asks "What's that do?" as she fires at him, the projectile blowing him into tiny pieces. Drusilla, distressed, quickly leaves and Angel slips away too. However, Buffy follows Angel, telling the gang to pick up the pieces and keep them separate, just as the mall's sprinkler system starts to go off.

Buffy searches for Angelus, only for him to jump on her. He boasts that he only pretended to love her, but Buffy tells him she knows he isn't the man she loved. Angelus doesn't believe her, noting that she still made him what he is. The two, soaking wet from the sprinklers, fight, and Buffy manages to overpower him. She pulls out a stake, but Angelus tells her that he knows she can't kill him. Buffy knows he's right, and instead knees him in the groin. As Angelus sinks to the floor, Buffy tells him it's only a matter of time.

Giles drives Buffy home and she feels awful for putting her friends in serious danger. Giles assures her that, although she did act irresponsibly, it is obvious that she and Angel loved each other. He warns that the next few months will be hard on them all, but reassures her that she still has his support and respect.

Later, Buffy is watching a movie, and her mother sits down next to her, presenting her with a birthday cupcake. She promises that she'll take Buffy out shopping soon. Joyce asks Buffy what she did for her birthday, and Buffy simply answers that she got older. Joyce lights the candle on the cupcake and reminds Buffy to make a wish, however Buffy chooses not to and instead leaves it to burn before cuddling up in the arms of her mother.

Enyos: "You! Evil one!"
Angelus: "Evil one? Oh, man, now I've got hurt feelings."
Enyos: "What do you want?"
Angelus: "A whole lot. Got a lot of lost time to make up for. Say, I guess that's kind of your fault, isn't it? You Gypsy types, you go and curse people, you really don't care who gets hurt. Of course, you did give me an escape clause, so I gotta thank you for that."
Enyos: "You are an abomination. The day you stop suffering for your crimes, you are no longer worthy of a human soul."
Angelus: "Well, that pesky little critter's all gone. So we can get down to business… Don't worry, it won't hurt a bit… after the first hour." 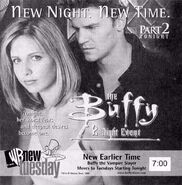 "Tonight, her worst fears and deepest desires become one."
Add a photo to this gallery

Retrieved from "https://buffy.fandom.com/wiki/Innocence?oldid=229113"
Community content is available under CC-BY-SA unless otherwise noted.