"Inca Mummy Girl" is the fourth episode of the second season of Buffy the Vampire Slayer television show, and the sixteenth episode in the series. It was written by Matt Kiene and Joe Reinkemeyer, and directed by Ellen S. Pressman. It originally broadcast on October 6, 1997 on The WB network.

MUMMY MAY I — Buffy and Giles are suspicious of Ampata, a Peruvian exchange student staying at Buffy's house, when a fellow student goes missing during a school field trip to the Natural History Museum and a broken Peruvian pictogram-cover plate is found in his place. Meanwhile, after Xander falls head over heels for Ampata, he faces certain death when his love interest is revealed to be an ancient mummy who must kill to stay alive.[1]

Sunnydale High School is hosting a cultural exchange program, and students have been paired with international exchange students who will live with them for two weeks. In preparation, Buffy's class takes a field trip to the Sunnydale Natural History Museum, where they see a mummy in the Inca exhibit. Buffy mentions her mom signed her up for the exchange, paired with a mystery student who she only knows is a boy named Ampata. Xander becomes jealous when he learns that she will room with a guy.

After everyone leaves the museum, a class delinquent, Rodney Munson, tries to steal a ceramic plate held by the Inca Princess' mummy, but instead, he breaks the seal keeping her there. Instantly, the mummy wakes up and pulls Rodney into her coffin. That night, the Scoobies, having realized that Rodney never returned from the field trip, sneak into the museum, where they encounter a man in traditional Inca clothing wielding a sword. Initially he attacks them but quickly vanishes. Willow notices that the supposed 500 year old mummy has modern braces on its teeth, and it is assumed that the original mummy sucked the life out of the Sunnydale High student.

Buffy remembers she is late to pick up the exchange student at the bus station, and she rushes there with Willow and Xander in tow. While they're on their way, though, the mummy lures Ampata away and sucks the life out of him, just as she did with Rodney. When Buffy arrives, the now youthful mummy poses as Ampata. Since no one ever saw a picture of the real Ampata, they're surprised at the difference in gender but assume that it's just a miscommunication with the exchange program.

"Ampata" is taken back to Buffy's house, and Xander is instantly smitten with her. She seems to feel similarly for him, and Willow is clearly jealous as the two flirt with each other.

At school the next day, Cordelia makes plans with Devon to meet at the dance that night, at which his band is performing. The Swedish exchange student staying with Cordelia, Sven, stands creepily nearby; Cordelia complains to Devon that Sven doesn't speak a word of English. After Sven is dragged away by Cordelia, Devon discusses her attractiveness with his friend and bandmate Oz, who is unimpressed with her. Devon calls him picky, saying that as lead guitarist, Oz could get any girl he wants; Oz defends himself saying that he's not picky, Devon is just too easily impressed.

Meanwhile, Willow and Xander talk about their costumes for the dance. Willow is excited about hers, but Xander doesn't listen, only worrying about looking good in front of Ampata. Just then, she and Buffy arrive at school. The four of them find Giles, who has been working on deciphering the markings on the fragment of the Inca seal. He asks Ampata if she can translate any of it, as they know she's from South America. She seems worried by the seal, reluctant to translate it, but she is able to pick out the word "bodyguard" among the markings. She mentions a legend of there being a bodyguard for the Inca mummy, keeping away those who would harm her.

The four separate into groups of two - Xander keeps Ampata company on the bleachers outside school, eating sweets and flirting. Buffy and Willow do research in the library, following up on the bodyguard lead. Rather, Buffy does research, while Willow is distracted by thoughts of Xander and Ampata. Buffy reassures her that Ampata's only staying for two weeks, but Willow is still upset, as she knows that even when Ampata leaves, Xander will just find another girl, and still won't want her. She says she didn't mind as much when he was obsessing over Buffy because at least then she knew he didn't have a chance. She almost resolves to move on from Xander, but says she hasn't made a choice to yet.

Giles changes the subject, as he's realized that the Inca mummy is likely Rodney's killer. Back at the bleachers, the man with a knife from the museum has found Xander and Ampata. He attacks them from behind, demanding Xander give back the seal. He recognizes Ampata, but she and Xander quickly escape. Everyone gathers in the library again,

The bodyguard, meanwhile, has gone to the school. He finds the Inca Princess and confronts her. She evades him, but he finally catches up with her later on. She tells him that she wants to live, that she shouldn't have been forced to give up her life at such a young age, that she was innocent. He tells her it was her duty, and that she has killed other innocent people now. She then grabs him and gives him the kiss of death in the school bathroom, sucking out his life to keep herself alive. Back in the school hallway, the smitten (and oblivious) Xander asks "Ampata" to the dance and she gladly accepts. Willow is crushed to see Xander yet again with another girl while he continues to see Willow as his best friend and never in a romantic light.

Back at Buffy's, Ampata's trunk has arrived from the bus depot, and, as, Buffy starts to open it, the Inca Princess urges her not to bother. inside the trunk is the real Ampata's now mummified corpse, so the Inca Princess distracts Buffy by talking more about the Inca ceremonial seal. "Ampata" speaks of the princess's suffering and difficulty in obeying her duty to die at 16, the same age Buffy is. Buffy is primarily miffed that she can't go to the dance because she must help Giles with her Slaying duties and save lives, while the Inca Princess is occupied with eagerly anticipating the dance.

The dance is a costume party in which students are supposed to embrace other cultures' attire. Cordelia has an argument with Devon, who then discusses her attractiveness with his guitarist Oz. "Ampata" is dressed as an Inca princess, and Xander can't take his eyes off her. Willow has gotten dressed up in a large Eskimo parka. Except for Cordelia, who speaks to her only to insult her, Willow is by herself at the dance. As Xander and the Inca Princess slow dance, Oz notices Willow and is instantly drawn to her. During their dance, the Inca Princess' hands start to return to their mummified state. She runs away from Xander, and then draws a student, Jonathan, into another room with plans of sucking the life out of him to preserve her own youth. However, Xander arrives, looking for "Ampata," and the student runs away.

Back at Buffy's place, Giles tells the Slayer that the bodyguard's mummified remains were found in the school bathroom. They rush to open Ampata's trunk to find out more about her, and discover the real Ampata's body. They inform Willow, who leaves the dance just before Oz can introduce himself. Giles then heads to the museum to piece together the Inca sacred seal while Buffy hurries to save Xander from the Inca Princess' deadly kiss. The Princess cares too strongly about Xander, however, and instead of kissing him, she runs away and heads to the museum. She grabs the seal from Giles and shatters it. Buffy rushes to save Giles, but Buffy and Giles both end up entombed together in the mummy's sarcophagus, unconscious. Willow arrives, and the deteriorating Princess goes to feed off her. Xander shows up and insists that if she must feed on anyone, it should be him. Buffy grabs her away from Xander, but the Inca Princess has already returned to her mummified form, and her corpse shatters on the floor.

The next day at school, Xander claims to have bad taste in women. Buffy assures him that the Inca Princess did care for him but was simply in poor circumstances. He likens her situation to how Buffy was expected to die and gave up her life anyway. Buffy reminds Xander that she had him to bring her back.

Ampata: "He [Xander] has a way of making the milk come out of my nose."
Buffy: "And that's good?"

Buffy: "I'm not a big secret-sharer. I like my secrets. They're secret." 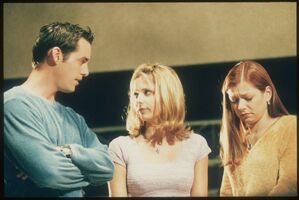 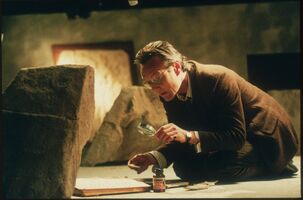 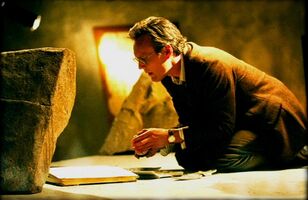 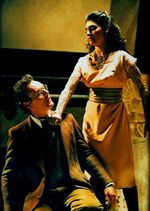 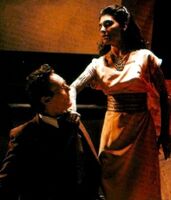 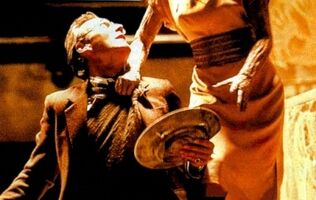 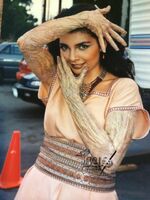 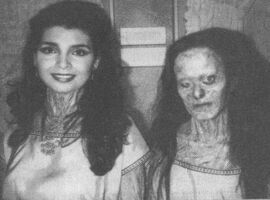 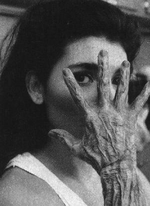 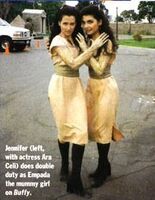