"In the Dark" is the third episode of the first season of Angel television show, and the third episode in the series. It was written by Douglas Petrie and directed by Bruce Seth Green. It originally broadcast on October 19, 1999 on The WB.

SETH GREEN AND JAMES MARSTERS FROM "BUFFY THE VAMPIRE SLAYER" GUEST-STAR — Angel receives an unexpected visit from Oz who delivers a gift from Buffy, a mystical relic that renders the owner unkillable — not by stakes, not fire, not even sunlight. But Oz is followed by Angel's arch nemesis, Spike, who is determined to fight Angel to the death for this awesome power.

A young woman, Rachel, runs down a dark alley, looking frantically over her shoulder for signs of pursuit, but no one is there. Puzzled, she stops and hides, then stands, looking back the way she came. Suddenly, a man, Lenny, grabs her from behind, threatens her, and slaps her to the ground. Telling her he can't take it anymore, Rachel's strung-out boyfriend Lenny points a gun at her head and starts to pull the trigger. Appearing out of nowhere, Angel grabs Lenny's gun hand, knocking his arm up and sending the shot high. Angel effortlessly disarms Lenny, then knocks him unconscious with one brutal punch. Standing on the rooftop of a neighboring building, Spike watches Rachel thank Angel in the alley below and improvises a cheesy narration for their gestures.

Listening to an L.A. radio station, Oz parks his van in front of Angel's building. Inside, Cordelia gleefully prints up an invoice for Rachel, their first paying customer. When Oz opens the door and walks in, Cordelia is thrilled to see her old Sunnydale friend. After Angel and Oz's laconic greetings, Oz holds a ring out to Angel. He recognizes it as the Gem of Amara. Doyle explains that the ring is a priceless talisman which "renders the wearer one hundred percent unkillable, if he's a vampire" meaning Angel could, among other things, go out into daylight. Oz tells Angel that Buffy wanted him to have it. He also says that she's doing good, "just being Buffy." As the others leave to go to a pub, Angel stays behind to hide the ring under a loose brick in one of the sewer tunnels.

The next morning at the Angel Investigations offices, a tearful Rachel phones during Angel's tai chi practice to say that Lenny has been released on a technicality. Angel promises to be right over. Before he can get into his car, Spike springs an ambush in the parking garage and the two vampires exchange a flurry of words and blows. Angel defeats Spike before Cordelia and Doyle rush in to back their friend up. Spike recognizes and greets a flustered Cordelia, then threatens Angel one last time before taking off. Worried about his friends, Angel tells Cordelia she must stay with Doyle in case Spike decides to make her a target. Angel meets Rachel at her apartment, where he listens to her story, then encourages her to leave Lenny permanently.

On a tip from one of Doyle's unsavory contacts, Angel chases and corners Spike in a dead end blocked by a chain link fence. Hands locked behind his head, Spike turns and surrenders himself. Suddenly, a white-shirted figure whirling a long chain overhead appears from around the corner. Angel finds himself, abruptly, on his back on the ground, with the end of the heavy chain tightly wound around his neck, completely at the mercy of Spike's smiling henchman.

Cordelia and Doyle worry that Angel hasn't checked in. Meanwhile, he is suspended by long, manacled chains from the ceiling of a large warehouse. Spike introduces him to his captor, Marcus, a master torturer with a taste for children. With classical musical playing, the reserved vampire prepares his instruments while Spike recites highlights from Marcus' gruesome curriculum vitae. To begin, Marcus inspects Angel, inside and out, then asks what does he want. When Angel is defiant, Marcus steps over to the brazier and returns with a red-hot poker, which he abruptly rams through Angel's bared abdomen. Time passes as Marcus works into a rhythm of hurting Angel, then asking what he wants, then hurting him again.

Breaking off a stake, Spike threatens to dust Angel then and there if he doesn't talk, until Marcus points out that, knowing Spike won't kill him before learning the ring's location, Angel therefore also knows that Spike is bluffing. Spike tosses the stake to the floor. Angel takes advantage of the reprieve to tell Spike he's an idiot for believing that Marcus, a vampire, has no interest in obtaining the Gem of Amara for himself. Spike answers dismissing Marcus as a threat, deeming him too single-mindedly obsessed with the art of torture to care about anything else. In the sudden silence of the symphony coming to an end, Spike then taunts Angel about his own obsession with Buffy, recounting news of her recent rebound disaster, which causes Angel to look pained. Marcus begins the record again and Spike, rolling his eyes, leaves "to get some air." Marcus plunges another hot poker into his captive. Listening to Angel's strangled screams, Spike smiles and says, "Now that's music." Marcus shoots holes in the building's ceiling so that Angel, agonized by any movement, must stretch and hold himself at the limit of his chains to avoid the beams of sunlight.

Abandoning his fruitless search of Angel's apartment, Spike is confronted by Cordelia and Doyle, armed and waiting behind the door. Spike tells them that if they want Angel to live, they must find the ring and turn it over before sundown. Angel, meanwhile, endures the abrupt removal of two pokers and makes Marcus believe he's about to break. He lures his tormentor closer by whispering that what he most wants is forgiveness. Marcus draws near enough for Angel to make his move. Holding Spike's discarded stake between his booted feet, Angel brings his legs up high enough to plunge the jagged wooden point into Marcus' heart. Suddenly reappearing, Spike grabs Angel's feet and disarms him. Marcus punches Angel before Spike moves him out of Angel's reach. Selecting a pair of needle nose pliers, Spike chips in as Marcus resumes his interrupted torture session.

Having no more success than Spike had, Cordelia and Doyle conduct their own search for the Gem of Amara in Angel's apartment. When Cordelia complains to Doyle that her list of cliched hiding places has inexplicably failed to yield results, it finally occurs to them both to search the sewers. Cordelia is dismayed that the two seemingly have a long search ahead of them with little time. However, Doyle, letting Cordy turn into the next tunnel ahead of him, quickly and surreptitiously uses his demon senses and immediately locates the ring under the brick where Angel hid it, claiming it to be pure good luck. Now all they need is a plan.

Before sundown, they meet with Spike at the appointed spot and demand to see Angel before they reveal where they've stashed the ring. Spike reluctantly agrees and takes them to where he and Marcus are holding the now barely-conscious Angel. When Spike gloatingly admits he has no intention of going through with the trade, Doyle pulls the ring out of his pocket and throws it across the warehouse floor. Just as Spike reaches for it, he is forced to duck and roll when Oz smashes his van through the warehouse wall. From the driver's side window, Oz holds Spike and Marcus at bay with two crossbows until Cordy and Doyle can get Angel into the back of the van. Once they're safely inside, Oz floors it in reverse and the van peels away. Spike then looks for the ring only to find it has disappeared — and so has Marcus. Outside, Marcus walks out onto the street and into direct sunlight without injury. Spike angrily smashes apart Marcus's record player. He declares that, from now on, he's going to work alone, just as a small ray of sunlight sets his hair on fire. After putting the small blaze out, Spike only hopes that Angel and Marcus somehow manage to kill each other.

Doyle and Cordelia are trying to tend to Angel's injuries, however he just wants to track Marcus down and, knowing his predilection for children, believes the vampire won't have gone far. In fact, Marcus makes his way along the boardwalk until he spots a cub scout troop clustered around a vending cart. While Marcus focuses on the children, Oz drives straight down the middle of the boardwalk, using the van's speed and bulk to knock the invincible vampire flying. Cordelia shoots Marcus with a crossbow, however the ring protects him. Doyle then tries beating him back but is quickly swatted aside. Angel leaps out of the van, bursting into flame the moment sunlight touches him, and tackles Marcus off the pier, falling with him to the water below. In the shade under the boardwalk, the two vampires fight. Angel impales Marcus on a beam, but the Gem of Amara protects him — until Angel yanks the ring off his finger and Marcus crumbles to dust. Angel slides the ring onto his own hand, then steps out into the sunlight.

That evening, Angel watches the sun set. To Doyle's dismay, Angel has decided not to keep the ring. Angel tries to explain his feeling that the Gem of Amara only appears to be the redemption he seeks, and that keeping it would somehow make him forget about the many people forced to live in the darkness, needing a champion to defend them from what seeks to hurt them. Doyle is unconvinced, but sees that Angel is determined to do what he believes to be the right thing. When the last sliver of sun disappears, Angel removes the Gem of Amara and smashes it flat with a chunk of brick. Doyle then remembers that Rachel called to say "thanks, and that she found a little faith." Angel tells him he had "a pretty good day." He adds: "You know — except for the bulk of it, where I was nearly tortured to death." Together, they leave the rooftop and head down the stairs. 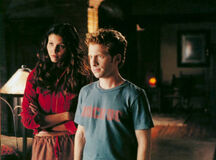 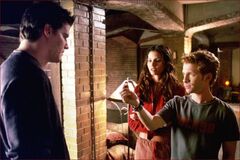 "All New WB Crossover Event! Tonight, good and evil fight for the key to eternal life. The battle begins at sunset… and continues into daylight."
Add a photo to this gallery

Retrieved from "https://buffy.fandom.com/wiki/In_the_Dark?oldid=217987"
Community content is available under CC-BY-SA unless otherwise noted.