Start a Wiki
Illyria's killers were Old Ones who killed Illyria and trapped her sarcophagus in the Deeper Well. They sealed part of her energy into her symbols and hid them so that she would not find them. They forgave Catari's life but on the conditions that he never surrendered one of the scythes where the energy was sealed. 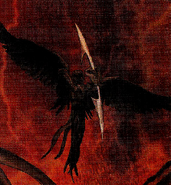 Add a photo to this gallery
Retrieved from "https://buffy.fandom.com/wiki/Illyria%27s_killers?oldid=207130"
Community content is available under CC-BY-SA unless otherwise noted.