In this episode, Buffy follows Angel back to Los Angeles, where she confronts him about his surreptitious assistance back in Sunnydale. They are attacked by a Mohra demon; when Angel kills the demon he is restored to life by its powerful blood. After The Oracles—a link to The Powers That Be—confirm he is human again, Angel and Buffy spend a blissful night together. When Doyle receives a vision that the Mohra has regenerated itself, Angel leaves to kill the demon for good. In the ensuing battle, Angel discovers the consequences of having only human strength; Buffy must come to his rescue and slay the demon herself. Angel returns to The Oracles, who agree to turn back time so that Angel, accepting the entire cost of the bargain, can kill the Mohra before its blood makes him human.

In the episode's first shot, Angel winds an antique clock on his desk. He has been back in L.A. for three days since assisting Buffy (unbeknownst only to her) during Sunnydale's latest mysterious manifestation. Now, Cordelia and Doyle closely watch Angel for signs of depression. Cordelia reveals that since he doesn't look depressed, then him seeing her again cut deeper than they thought. She probes for details about his trip, and is in the midst of expressing her tart opinion of Angel's inconsistent secretiveness when the Slayer herself suddenly appears in the office doorway. Hurt and angry that Angel let everyone else know he was in Sunnydale, Buffy has come all the way to L.A. to tell him how she feels. Cordelia quickly introduces a fascinated Doyle, then frankly pushes Doyle into the outer office. Finally one on one, Buffy confesses that even when she can't see him, since their very first meeting in that dark alley behind The Bronze all those years ago, she has always been able to sense Angel's presence when he's near. She is worried—and disappointed—because that unmistakable awareness over the past couple of days never materialized into Angel's physical presence. Buffy is also angry, believing Angel made a unilateral decision in a situation affecting them both. They reach an impasse. Angel, though he apologizes for unintentionally hurting Buffy, remains convinced he did the right thing. With nothing left to discuss, and resigned anew to living her life without Angel, Buffy turns to leave. At that moment, a ferocious, sword-wielding warrior demon crashes in through the window and knocks Angel to the floor. Stepping in, Buffy disarms the demon and engages it hand to hand, allowing Angel to retrieve the sword and plunge it into the demon's abdomen. This forces the demon into retreat and it escapes back through the smashed window. Finding themselves in uncomfortably intimate proximity, Buffy and Angel awkwardly sort themselves out and prepare to give chase.

As they track the demon through the sewers, Buffy continues to snipe at Angel, mocking his choice of weapon, sarcastically praising his ability to track by scent (Angel touches some demon blood on the tunnel wall to show her that they are going in the right direction) and finally alluding to their painful breakup several months earlier while on a similar hunt through the sewers of Sunnydale. When Angel says he feels weird, Buffy relents, confessing her pain and confusion over still wanting him without being able to have him. Angel gently corrects Buffy, saying that the demon's blood on his fingers is powerful enough to make him feel strange. Despite her chagrin, the ice between them is broken and their awareness of each other intensifies to the point where they must struggle to stay on task. When the demon's track seems unclear, one path leading deeper into the sewers and one leading up to the surface, Buffy and Angel logically split up. Angel follows the demon underground and flushes it from cover. During the first volley of blows, the demon inflicts a shallow cut on Angel's palm. Angel recoils and reflexively vamps, then renews the fight with increased ferocity. When Angel delivers a fatal thrust, some of the demon's phosphorescent blood mixes with his own. White light suffuses his body and he drops to his knees with a shout. Shocked by the unmistakable sound and sensation of his long undead heart beginning to beat, Angel whispers "I'm alive."

In awe, Angel enters the office through the front door in full daylight. Cordelia brightly guesses that Angel has an umbrella to shield him, but Doyle immediately discerns that their friend is alive. After briefly standing in the sunlight streaming through the windows (while Doyle feels his wrist for a pulse), Angel realizes his incredible desire for food and demolishes the contents of the office fridge. Trying to figure out what to do next, Angel sends Cordelia to call Buffy off the hunt, but asks her not to mention his altered state yet. Doyle pages quickly through a reference book and Angel identifies the Mohra demon. While Angel moves back to the window, this time to marvel at his reflection in the glass, Doyle reads that the Mohra demon, which incidentally needs great quantities of salt to survive, works for the "other side" to take out warriors for good like Angel and Buffy, good agents of The Powers That Be. The reference also states that the Mohra's "veins run with the Blood of Eternity." Musing that this explains what happened to him, Angel becomes determined to ask the Powers why. Doyle cautions Angel that The Powers cannot be questioned directly, but must be approached "through channels." When Angel demands access, Doyle obligingly takes him to see The Oracles, using a spell to gain entry into their realm through The Gateway for Lost Souls. Accepting the gift of Angel's watch, The Oracles confirm that he is both alive and truly human, with all the attendant pain and pleasure of that mortal condition. Angel reports back to Doyle, who concludes that, since a whole new world has opened up for his friend, the next logical step would be to figure out what Angel wants. Alone among strangers, Buffy wanders along a sunlit garden path and gazes out at the ocean. Suddenly puzzled to sense him for the first time in broad daylight, she turns—and is stunned to see Angel striding toward her. Never pausing, Angel takes the Slayer into his embrace and kisses her passionately in the golden L.A. noon.

Back at Angel Investigations, Cordelia brings Doyle up to speed about the "forbidden love of all time" between Buffy and Angel. Meanwhile, Angel is wondering aloud about his options and his purpose, now that he's human. Buffy thinks his sober concerns sound far too cautious, and is on the verge of giving up hope when she discovers that the apparently stoic Angel is extremely susceptible to the deep temptation of having her within sight and scent and reach. Unable to resist any longer, Buffy and Angel fairly lunge into each others arms and find immediate gratification on the kitchen table. Later, Angel raids the fridge in the nude, bringing an impromptu picnic back to bed for a glowing Buffy. The two of them spend much of the night exploring the sensual and emotional delights—the sheer joy—of being human, together, for the first time.

Cordelia and Doyle commiserate over drinks, wondering if they are out of a job. Doyle suddenly has a vision and returns to Angel's place to report that the Mohra demon has unexpectedly regenerated itself, bigger and meaner than ever. Doyle joins Angel for another hunt, suggesting they include the Slayer to provide some "supernatural" muscle, but Angel believes that his being human will never work unless he can still fight demons on his own. Researching cryptic clues about Mohra vulnerabilities on the way, Angel and Doyle track the demon to a nearby salt refinery where it ambushes them, knocks Doyle unconscious with a single kick and proceeds to severely thrash Angel. In the meantime, Buffy, waking alone in Angel's bed, forces Cordelia to tell her what's happening. In the nick of time, Buffy finds Angel and the Mohra at the bottom of an empty salt silo and takes over the fight while the demon declaims prophecies about dark hordes and the end of days. Angel spots the jewel on the demon's forehead, remembers that destroying its "thousand eyes" will stop it and shouts instructions to the embattled Slayer. Using one of its own weapons, Buffy smashes the Mohra's forehead jewel, whereupon the demon fractures and shatters in a burst of radiant light. In the sudden quiet, Buffy kneels down and gathers the battered Angel into her arms.

Returning to The Oracles, Angel asks about the portents described by the Mohra and learns that if he remains human, Buffy will face the minions of darkness alone and die much sooner. Stricken, Angel asks The Oracles to take back his life. At first, The Oracles refuse to interfere in "a matter of love" between "lower beings." Angel argues that there are larger issues at stake, that if he remains human, the "other side" will have certainly succeeded in removing one champion from the cause of The Powers That Be, as well as hastening the demise of another. The Oracles decide that Angel's willingness to sacrifice the single shred of happiness and love he has ever known qualifies him as a "higher being," but that his request to give back his life can only be granted if the entire day is erased. Angel never wavers in his determination to protect the Slayer, even when he learns that, in order to prevent circumstances from repeating exactly, he alone will remember all they have shared. Returning to Buffy, Angel tells her he has been to The Oracles to ask to become a vampire again—and that they granted his request. She rapidly passes through disbelief, anger and rejection, then grows wild with grief upon learning how little time actually remains to them and the fact that she will have no memory of what happened. Angel holds Buffy close and weeps as his heart breaks. They share one last, desperate kiss as the final seconds click past and as they hold each other, Buffy repeats that she will never forget. In a flash, time folds back exactly twenty-four hours earlier to the moment in Angel's office when Buffy again resigns herself to the necessity of forgetting the love of her life. Angel, shaken but composed, responds with the same words as before, now freighted with an infinitely deeper grief and longing. When Buffy turns to leave and the Mohra bursts through the window, Angel calmly picks up the antique clock from his desk that he had been winding at the episode's beginning, ducks the demon's first kick and steps inside its first sword thrust. Quickly, he smashes the clock into the demon's forehead, destroying its "thousand eyes," then steps back to watch it shatter and disappear in a thousand glowing fragments. Shocked, Buffy asks how Angel was able to destroy the demon so decisively. Angel shrugs and says "It was a Mohra demon. I, um, I've had a lot of time to catch up on my reading." When Buffy says "Yeah... Then that's all there really is to say," Angel turns to look down at the damaged clock. "Yeah," he agrees. When he turns back, he's speaking to an empty room. "That's it." 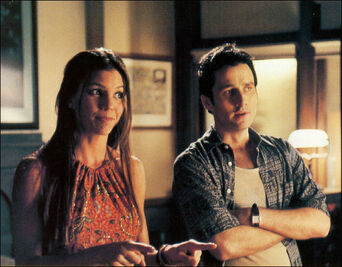 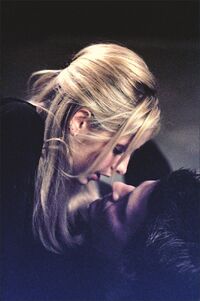 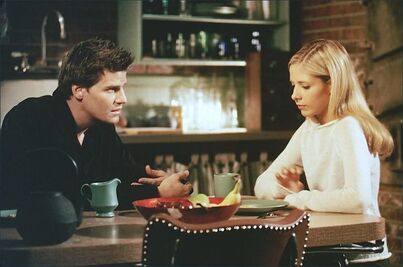 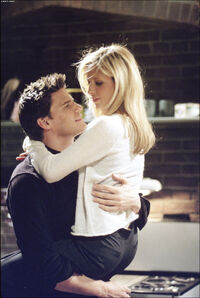 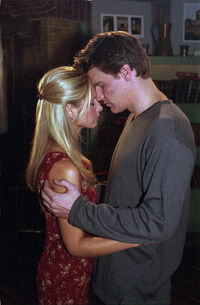 Retrieved from "https://buffy.fandom.com/wiki/I_Will_Remember_You?oldid=212077"
Community content is available under CC-BY-SA unless otherwise noted.