I Will Remember You

THE TWO-HOUR SPECIAL EVENT CONTINUES... — After learning that Angel was in Sunnydale but stayed out of sight, Buffy comes to Los Angeles to confront him about his unannounced stalking, but a bloody battle with a medieval demon leaves Angel with awesome new powers and Buffy with a chance for true happiness with her beloved.

Angel winds an antique clock on his desk. He has been back in L.A. for three days since assisting Buffy (unbeknownst only to her) during Sunnydale's latest mysterious manifestation. Now, Cordelia and Doyle closely watch Angel for signs of depression. Cordelia reveals that since he doesn't look depressed, then him seeing her again cut deeper than they thought. She probes for details about his trip, and is in the midst of expressing her tart opinion of Angel's inconsistent secretiveness when the Slayer herself suddenly appears in the office doorway. Cordelia quickly introduces a fascinated Doyle, then pushes him into the outer office.

In L.A. visiting her father, Buffy now demands an explanation for Angel having went to her town and followed her behind her back. Angel, though he apologizes for the way he handled things, remains convinced he did the right thing.They conclude that they should stick to the plan: keep their distance time enough so they forget. As Buffy turns to leave, a sword-wielding warrior demon crashes in through the window and knocks Angel to the floor. Buffy disarms the demon and engages it hand to hand, allowing Angel to retrieve the sword and plunge it into the demon's abdomen. The demon escapes back through the smashed window. Finding themselves in uncomfortable proximity, Buffy and Angel sort themselves out and prepare to give chase.

As they track the demon through the sewers, Buffy mocks his choice of weapon, sarcastically praises his ability to track by the smell of blood, and alludes to their breakup on a similar hunt through the sewers of Sunnydale. When Angel says he feels weird, Buffy confesses her pain and confusion over still wanting him without being able to have him. Angel corrects Buffy, saying that the demon's blood on his fingers is powerful enough to make him feel strange. When the demon's track seems unclear, one path leading deeper into the sewers and one leading up to the surface, Buffy and Angel split up. Angel follows the demon underground and flushes it from cover. During the first volley of blows, the demon inflicts a shallow cut on Angel's palm. Angel recoils and vamps, then renews the fight with increased ferocity. When Angel delivers a fatal thrust, some of the demon's phosphorescent blood mixes with his own. White light suffuses his body and he drops to his knees with a shout. Noticing his own heartbeat, Angel whispers: "I'm alive."

Angel enters the office through the front door in full daylight. Cordelia guesses that Angel has an umbrella to shield him, but Doyle discerns that their friend is alive. After briefly standing in the sunlight streaming through the windows, Angel realizes his incredible desire for food and demolishes the contents of the office fridge. Trying to figure out what to do next, Angel sends Cordelia to call Buffy off the hunt, but asks her not to mention his altered state yet. Doyle pages quickly through a reference book and Angel identifies the Mohra demon. While Angel moves back to the window, this time to marvel at his reflection in the glass, Doyle reads that the Mohra demon, which incidentally needs great quantities of salt to survive, works for the "other side" to take out warriors for good like Angel and Buffy, good agents of The Powers That Be. The reference also states that the Mohra's "veins run with the Blood of Eternity."

Musing that this explains what happened to him, Angel becomes determined to ask the Powers why. Doyle cautions Angel that they cannot be questioned directly, but must be approached through channels. When Angel demands access, Doyle obligingly takes him to see The Oracles, using a spell to gain entry into their realm through the Gateway for Lost Souls. Accepting the gift of Angel's watch, The Oracles confirm that he is both alive and truly human, with all the attendant pain and pleasure of that mortal condition. Angel reports back to Doyle, who concludes that the next logical step would be to figure out what Angel wants.

Along a sunlit garden path, Buffy gazes out at the ocean. Suddenly, she turns and sees Angel striding toward her. He takes the Slayer into his embrace and they kiss. Back at Angel Investigations offices, Cordelia brings Doyle up to speed about the "forbidden love of all time" between Buffy and Angel. Meanwhile, Angel is wondering aloud about his options and his purpose, now that he's human. Buffy thinks his concerns sound far too cautious. Suddenly, Buffy and Angel lunge into each others arms and begin making out on the kitchen table. Later, Angel raids the fridge in the nude, bringing an impromptu picnic back to bed for Buffy. The two of them spend much of the night together sensually exploring being human.

Cordelia and Doyle commiserate over drinks, wondering if they are out of a job. Doyle suddenly has a vision and returns to Angel's place to report that the Mohra demon has unexpectedly regenerated itself, bigger and meaner than ever. Doyle joins Angel for another hunt, suggesting they include the Slayer to provide some supernatural muscle, but Angel believes that his being human will never work unless he can still fight demons on his own. Researching clues about Mohra vulnerabilities on the way, Angel and Doyle track the demon to a nearby salt refinery, where it ambushes them, knocks Doyle unconscious with a single kick, and proceeds to severely thrash Angel.

In the meantime, Buffy, waking alone in Angel's bed, forces Cordelia to tell her what's happening. She then finds Angel and the Mohra at the bottom of an empty salt silo and takes over the fight, while the demon declaims prophecies about dark hordes and the end of days. Angel spots the jewel on the demon's forehead, remembers that destroying its "thousand eyes" will stop it, and shouts instructions to the Slayer. Buffy smashes the Mohra's forehead jewel, whereupon the demon fractures and shatters in a burst of radiant light. In the sudden quiet, Buffy kneels down and gathers the battered Angel into her arms.

Returning to The Oracles, Angel asks about the portents described by the Mohra and learns that, if he remains human, Buffy will face the minions of darkness alone and die much sooner. Angel asks The Oracles to take back his life. At first, they refuse to interfere in "a matter of love" between "lower beings." Angel argues that there are larger issues at stake; if he remains human, the "other side" will have certainly succeeded in removing one champion from the cause of The Powers That Be, as well as hastening the demise of another. The Oracles decide that Angel's willingness to sacrifice happiness and love qualifies him as a "higher being," but that his request to give back his life can only be granted if the entire day is erased, although Angel alone would have to remember it all in order to prevent circumstances from repeating exactly.

Returning to Buffy, Angel tells her he has been to The Oracles to ask to become a vampire again — and that they granted his request. She rapidly passes through disbelief, anger, and rejection, then grieves upon learning how little time actually remains to them and that she will have no memory of what happened. They weep and kiss as the final seconds click past and as they hold each other, Buffy repeats that she will never forget. Angel embraces Buffy as he holds back tears.

In a flash, time folds back to the moment in Angel's office when Buffy told him about sticking to the plan of keeping their distance, so Angel responds again they should do so until they forget. Buffy turns to leave and the Mohra bursts through the window, Angel picks up the antique clock from his desk, ducks the demon's first kick, and steps inside its first sword thrust. Quickly, he smashes the clock into the demon's forehead, destroying its "thousand eyes," then steps back to watch it shatter and disappear in a thousand glowing fragments. Buffy asks how Angel was able to destroy the demon so decisively. Angel says he had a lot of time to catch up on his reading. When Buffy says "that's all there really is to say," Angel turns to look down at the damaged clock and agrees. When he turns back, she's already left.

Doyle: "So Buffy and Angel? It's always been pretty volatile?"
Cordelia: "That was nothing. One time they kicked the daylights out of each other at the mall… I was too embarrassed to shop there for, like, weeks."
Doyle: "It must have been good sometime."
Cordelia: "At first he was just hanging around in the shadows, spying on us — boy, a lot's changed there huh? I was seeing someone at the time so I guess he just fixated on her."
Doyle: "And eventually they got together?"
Cordelia: "Did they ever, on her seventeenth birthday. Which kicked in his 'knowing a moment of true happiness' curse and then it really got ugly."
Doyle: "He went bad, tried to kill her."
Cordelia: "He tried to kill everybody. You weren't really going out much after dark in these days... Then she ran him through with a sword, sent him to Hell. He popped out four months later which was like a hundred years of torment in demon time or something... His hair's never really been the same."
Doyle: "And then?"
Cordelia: "Then they were on-again, off-again — you sort of need a score card at this point — but finally they broke up for real last spring. That's when he took off for LA. The story thus far."
Doyle: "Great. So what happens now?" 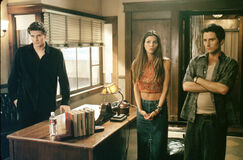 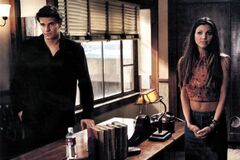 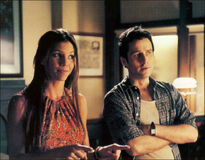 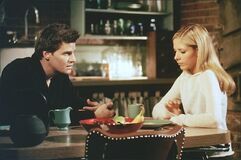 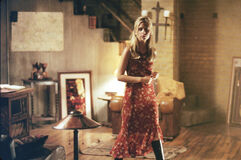 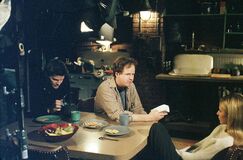 "All New WB Crossover Event: Only one thing could make Angel sacrifice his immortality. And tonight, she's coming to town."
Add a photo to this gallery

Retrieved from "https://buffy.fandom.com/wiki/I_Will_Remember_You?oldid=235496"
Community content is available under CC-BY-SA unless otherwise noted.