I Only Have Eyes for You

"I Only Have Eyes for You" is the nineteenth episode of the second season of Buffy the Vampire Slayer television show, and the thirty-first episode in the series. It was directed by James Whitmore Jr. and written by Marti Noxon. It originally broadcast on April 28, 1998 on The WB.

LOVE IS FOREVER — Buffy encounters a tortured spirit haunting the halls of Sunnydale High and recruits her friends to help the bitter spirit in its quest for peace. Meanwhile, Giles is filled with anguish when he believes the spiritual being is Jenny trapped and trying to impart a final message to him from the beyond.[1]

At the Bronze, Buffy rejects the advances of Benjamin Straley, who's looking for a date for the Sadie Hawkins dance. She tells him she's never going to date anyone again. On her way to check in with Giles, she stops a male student from almost shooting a female student. They have no recollection of why they were fighting, and the gun disappears. Later, Principal Snyder blames Buffy for the incident. While waiting in his office after he gets called out, a yearbook from 1955 mysteriously falls off the shelf. Willow gives Giles a rose quartz necklace that she found in Ms. Calendar's desk after he stops by to check on Willow's new assignment as computer science teacher. In class later that day, Buffy falls asleep and dreams about events that take place in the same classroom, but in 1955: a male student and a female teacher are having an affair, and stand in the classroom clandestinely talking. As Buffy comes back to the present, her teacher writes something from the lesson on the board. As he finishes writing, it becomes clear that he has unintentionally written "Don't walk away from me, bitch!" which is a line uttered by the student holding the gun who Buffy stopped. Afterward, Xander is grabbed by a monster arm inside his locker. Buffy helps him break away, but the arm disappears when they return to look.

Giles is intrigued by the possibility of a ghost and is immediately sure that it's Jenny Calendar. Meanwhile, Angelus, Spike, and Drusilla have taken up residence in an old abandoned mansion, and Angelus passes the time taunting Spike and flirting with Dru. Spike rolls away on his wheelchair, obviously angry with Angelus.

Later that night, George, a janitor, meets Miss Frank, a teacher, in the hallway as she is leaving after working late. She asks him if George is his correct name, making it clear that the two are barely acquainted. A moment later, the two begin a lover's quarrel, each of them obviously possessed by a spirit. When the spirit causes Miss Frank to say that she doesn't love him, a gun appears in George's hand. He shoots her, and she then falls over a balcony of the school. Giles, who is reading in his office, hears a woman's voice off camera saying "I need you." Thinking it may be Jenny's ghost, he goes to investigate. He is too late to prevent the killing, but he tackles George just as the gun vanishes.

Later, the group discusses the event in the library. Giles is convinced that Jenny is haunting the school, but Willow, Xander, and Buffy disagree with him. On the internet, Willow learns that in 1955, Sunnydale High student James Stanley killed his teacher, Grace Newman, on the eve of the Sadie Hawkins dance after she tried to break off their affair. Willow and Xander feel sorry for both of them. Buffy is particularly angry at the boy, insisting that while Grace deserves sympathy, James does not. Xander comments that "the quality of mercy is not Buffy."

Xander, Cordelia, Willow, and Buffy go to the school cafeteria for lunch, where chaos erupts when the food turns into snakes. The room empties quickly, and Cordelia is bitten on the face by a snake. Outside, Principal Snyder discusses the situation with Police Chief Bob Munroe. Snyder reveals his knowledge of the Hellmouth and expresses concern that he won't be able to keep the parents in the dark indefinitely. Munroe tells him that the City Council expects Snyder to handle the situation, and suggests he should take it up with the mayor if that is difficult. Snyder is taken aback, and says he will handle it.

Willow devises a plan to contain the spirits and they head off to the school where they prepare. Giles has already arrived and is trying to summon Jenny's spirit. Buffy hears music coming from the music room and sees Grace and James dancing there. James' face suddenly changes to a gory mess, startling Buffy. Cordelia looks in the mirror to find her face has become mutilated and red. On the stairwell, Willow begins to sink into the floor, and Giles rushes to save her. Willow finally convinces him that the spirit is not Jenny because she would never do such evil things. Everyone lights their candle and starts chanting the spell, but the candles blow out and a swarm of wasps follow them through the hallways. Everyone rushes out to find the school surrounded by wasps.

In the garden of their new home, Drusilla gets a vision about Buffy meeting with death. Spike goads Angelus into actually facing Buffy instead of just taunting her, and Angelus decides to finally go and confront her, but not before making it clear to Spike that he intends to have his way with Drusilla afterwards. Tears just about pool up in Spike's eyes as Angel holds Drusilla tight against him and caresses her.

Meanwhile, the Scoobies regroup at Buffy's house. They agree that it is James' ghost, and Giles says the next step is to find out what the ghost James needs to accomplish. Buffy is the one who understands that he wants forgiveness, but she maintains that he doesn't deserve it and must "live with it." Giles and Xander think that he should be forgiven whether he deserves it or not. Buffy is unmoved, and stomps off to the kitchen. Cordelia asks, "Overidentify much?", indicating she understands that all of the harsh things Buffy has said about James are really directed at Angel.

In the kitchen, Buffy hears a man's voice saying "I need you," and finds a flyer for the 1955 Sadie Hawkins dance in her pocket. She heads to the school, where the wasps part for her to enter. Willow finds Buffy gone, having left the ad behind, and everyone rushes after Buffy, but the wasps prevent them from entering. Giles explains that James wants to reenact the incident, but with a different ending. They agree that it's not possible to have another ending, and they fear Buffy will be shot.

Angelus appears in the halls as Buffy, now possessed by James, talks to him as if he were Grace. They continue the ghosts' argument with Angelus possessed by Grace's spirit, the two lovers speaking lines relevant to both couples. At the climax, Buffy pulls out a gun and shoots Angelus. He falls off of the balcony as though dead. Buffy, still possessed by James' ghost, rushes off to the music room where James killed himself. Angelus, still possessed by Grace, is not killed by the bullets, as vampires are immune. He wakes up and runs to the music room just in time to stop "Buffy" from pulling the trigger. Grace tells James she never stopped loving him, that she knows it was an accident that the gun went off, and that it wasn't his fault. She says she loved him with her last breath. They exchange apologies and kiss passionately. The spirits, now able to pass on, leave the bodies of Angel and Buffy, who break away from the kiss as Angelus realizes what he has been doing. He pushes Buffy aside and rushes off.

Buffy talks with Giles, processing the recent events. She doesn't understand why Grace would forgive James, but she says it doesn't matter.

At his mansion, Angelus scrubs furiously at his body, saying he was violated by being infested with love. He then gets the urge for a "real vile kill" to cleanse himself. Drusilla invites Spike out as well but Angelus makes it clear that Spike is not welcome, claiming they need to "travel light" since it's not long before sunrise. After they leave, Spike stands up and kicks the chair aside, revealing that he has fully healed from his spinal injury and has been feigning weakness, waiting for his chance to strike back.

Cordelia: "Okay. So what's up with Buffy?"
Xander: "How many times do we have to go over this? Nothing's up with Buffy. We're just good friends..."
Cordelia: "No, I mean, what's up with Buffy? Like, is she okay?"
Xander: "Sorry. I'm not used to you addressing subjects not directly related to... you. She's fine. I guess. Why?"
Cordelia: "She only blew off Ben Straley — the most eligible hunk in town. He's totally rad and his father owns a department store. I mean, he's the guy I'd be going out with if I wasn't so obviously brain damaged. No offense."
Xander: "Oh no. Why would I be offended?"
Cordelia: "Anyway. Ben told Lynette, who told Charity, that Buffy wouldn't even give him the time of day."
Xander: "Good for her. She's providing much needed life experience for the rejection-deprived."
Cordelia: "The guilt thing's just getting a little old, you know. Everybody's told her what happened to Angel isn't her fault."
Xander: "Yeah. Everybody except the one guy she needs to hear it from." 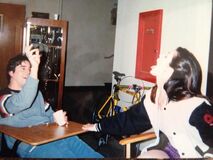 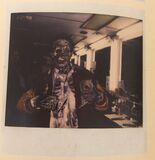 Retrieved from "https://buffy.fandom.com/wiki/I_Only_Have_Eyes_for_You?oldid=212031"
Community content is available under CC-BY-SA unless otherwise noted.