"Hush" is the tenth episode of the fourth season of Buffy the Vampire Slayer and the sixty-sixth in the series. Written and directed by Joss Whedon, it originally broadcast on December 14, 1999 on The WB network.

SILENT NIGHT — A silence falls over Sunnydale when otherwordly beings come to town and steal the power of speech from all the residents. Meanwhile, Riley gets his first clue to Buffy's slayerside when they have a fight with the outside visitor, and Willow attends a Wicca group that's not all she had hoped.[1]

Professor Maggie Walsh talks about communication in class and then asks Buffy to come and lie on her desk for a demonstration. Riley steps forward and kisses Buffy, then the sun goes down. Buffy hears a young girl's voice and walks out of the classroom and into the halls where a girl holding a small box stands singing:

Can't even shout, can't even cry
The Gentlemen are coming by.
Looking in windows, knocking on doors,
They need to take seven and they might take yours.
Can't call to mom, can't say a word,
You're gonna die screaming but you won't be heard.

Riley is behind her and reaches out to her shoulder. She turns around and instead sees one of the Gentlemen. Buffy wakes up to see she was dreaming in class. Willow teases her by saying the last 20 minutes of the class laid out everything for the final. Buffy smiles at her teasing and just says "Just tell me I didn't snore." As they're leaving, Willow asks about her dream and Buffy says it was intense. Riley steps up behind them and says that was weird because she looked so peaceful whilst sleeping. They talk about their plans for the night. Both make up excuses for their real plans and part ways, unhappy that their courtship does not appear to be going anywhere.

Giles receives a phone call from Buffy and tries to research the information she gained from her dream about the Gentlemen. Spike makes himself very comfortable at Giles' place and complains about there not being any more Weetabix (despite having eaten it all himself — again), claiming he likes to add it to his butcher's blood sometimes for texture. Repulsed by the mental image, Giles tells him to go and get some himself since he will no longer eat them now.

Xander and Anya arrive, arguing about whether Xander really loves her or — because Xander can't vocalize the way he feels — is only interested in her for sex. Her open voice on sex with Xander causes Giles to be repulsed and uncomfortable by it while Spike just finds Xander's situation amusing.

Giles informs Xander that he has to keep Spike with him for a few days because an old girlfriend of his will be coming over from England. None of them are particularly pleased about the arrangement: Xander can't trust Spike to be in the same room as him without restraints, and Spike doesn't particularly want to be around Xander or Anya, especially if they intend to be intimate with him while he is tied to a chair in the same room. The three argue back and forth with Giles wearily in the middle.

Willow goes to her Wicca meeting but soon finds the girls are just wannabe Wiccans with no knowledge of real magic. When Willow mentions the possibility of performing spells, the leader of the group just ridicules her. However, while the rest of wannabe Wiccans laugh one member, a girl called Tara, grows interested when Willow mentions actually performing magic. She tries to agree with Willow's suggestion, however she is very shy and after gathering the courage to speak up is quickly intimidated back into silence by the others. Willow realizes she's never going to learn anything from this group and speaks about it to Buffy, who complains to Willow how slowly her relationship with Riley is progressing, while Riley discusses the same with Forrest; both conclude that the reason they cannot progress their relationship is because of both their inability to reveal their true identities to each other and the fact that Buffy starts babbling.

That night, before going to bed, Xander ties Spike down to a chair in his bedroom, even though Spike claims he wouldn't want to bite him even if he could. Spike begins an exaggerated imitation of Anya to annoy Xander. Olivia shows up at Giles' apartment, and after some brief talking they get right to kissing. At the clock tower, one of the Gentlemen opens a box, and the voices of all the people in Sunnydale float out of their mouths and are drawn into the box.

When Buffy and Willow wake up the next morning and find they have no voices, they panic. Leaving their room, they see that nobody else in the dorms can speak, either. Xander, similarly panicked, blames Spike, whose gestured response is very clear. Riley and Forrest try to enter the underground lab, but without his voice Riley cannot activate the voice-based security system on the elevator door. Riley open a security panel and tries to put in a security code but gets it wrong several times. When the elevator opens they are cowed when Professor Walsh points out a sign saying they should have used the stairs in the event of emergencies.

Tara shows up at Stevenson hall looking around for Willow. A boy drops a glass and everyone jumps at the noise. When she doesn't see Willow, she leaves. Buffy and Willow walk through the town, they see that Sunnydale is closed down — except for bars and liquor stores. A doomsayer silently preaches it's the end of the world. People are sitting in random places, all sadly giving up or just stunned. They see someone selling dry erase boards for $10, at which Buffy rolls her eyes. Still they show up at Giles place armed with dry-erase boards hanging from their necks.

A television news report states that everyone in Sunnydale has come down with a case of laryngitis and the town has been quarantined. The threat of chaos looming that night, Buffy goes out to patrol, and Professor Walsh sends Riley and his team out incognito to maintain order. Riley and Buffy meet while walking out on the streets and as Riley is about to leave, he turns and kisses Buffy for the first time. Later that night, the Gentlemen and their demonic footmen lurk out into the night. Olivia wakes up in the middle of the night, and through the window she spies one of the Gentlemen, who travel by floating a foot in the air with their demon assistants, the Footmen, following on the ground. Two Gentlemen float through the UC Sunnydale dorms, finding a freshman boy. Their demon assistants hold the boy down while they cut out his heart. The next morning, Olivia draws a picture of the creature she saw. Giles sees in the paper that there was another similar murder the previous night and and recognizes what is happening. He puts aside his demonic volumes and pulls out a book: Fairy Tales.

In a lecture room at the college, Giles tells the story of the Gentlemen through very disturbing drawings and text on an overhead projector, with musical embellishment. Anya pulls out a bag of popcorn as they watch. Giles story tells how they travel into a town to collect seven human hearts, and they collect all the voices so that no-one can scream as a human voice is the only thing that can kill them. Buffy mimes killing them with a stake and when they all look at her strangely she pulls out an actual stake and make the same miming motion. However Giles puts a sign up on the projector that they are immune to weaponry such as swords and stakes, in the tales "The Princess screamed once, and they all died." Only the sound of a real human voice — not a recorded one, despite Willow's suggestion — can kill them and they have collected at least two of the seven human hearts they need. Unfortunately, Giles does not know how to get everyone's voices back, so has everyone else research. Giles puts up and image of Buffy on the projector, to which Buffy takes offence because it's hips are so wide. Despite that, it says she'll patrol. Riley and the rest of the Initiative suits up and then prepares to do the same.

Tara from the Wicca group tries to get to Willow's dorm when the Gentlemen chase after her. She finally makes it to Willow's dorm, and the two girls make a run for it. Riley is attacked by several of the Gentlemen's footmen in the clock tower, until Buffy shows up and starts fighting alongside him. The two are first shocked to see each other, but have neither time nor the ability to speak about it.

Spike vamps out while drinking a mug of blood at Giles' house; as he bends down by the sofa on which Anya is sleeping, Xander sees blood on Spike's lip and the unconscious Anya and concludes Spike has bitten Anya. Xander punches Spike several times before Anya and Giles stop him. He then kisses her passionately, and, realizing he does indeed love her, Anya suggests, through not very subtle hand signals, that they have sex and the two quickly rush off.

Hiding in a laundry room, Willow and Tara try to push a vending machine against the door to block it, but due to Willow's injured ankle that she got when Tara accidentally ran into her, they're not strong enough. Willow then tries to move it using magic, but she can only shake it a bit. Tara understands what she's trying to do, and clasps Willow's hand so they can combine their power. As soon as they hold hands, the vending machine slams against the door. Buffy gets caught by the Igor-like Footmen and the Gentlemen are about to cut into her when Riley shoots them with bolts of electricity. They fight and one of the demons grabs Buffy as she spots the box of voices on the table and recognizes it from her dream. She points it out to Riley and, with great flair he smashes one of the vials sitting there. Buffy rolls her eyes and continues miming and he finally understands and smashes the box. Everyone's voice is returned, and Buffy lets out a loud and long scream, which causes the Gentlemen's heads to explode in a shower of yellow slime.

The next day, Tara tells Willow that she was looking for her as she wanted to try a spell to restore the voices, knowing from the Wicca group that she was the only other person genuinely interested in it. The two talk, and Tara tells Willow that she's powerful, even if she doesn't know it yet. Giles and Olivia talk about how many scary things there really are and her reluctance to be part of Giles' world.

In her dorm room, Buffy is visited by Riley. He tells her that they need to talk, and Buffy agrees. The two find themselves, once again, overcome by silence.

Cheryl: "Well, you missed last week. We did a healing chant for Chloe's ankle. She said the swelling went right down."
Nicole: "What's she doing on a mountain bike anyway?"
Cheryl: "She was trying to impress Justin."
Willow: "I was actually talking more about real spells." 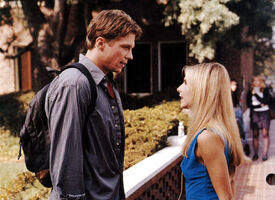 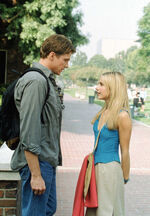 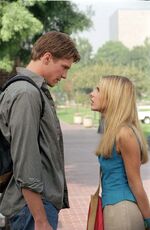 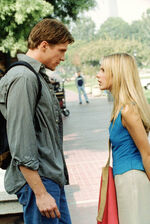 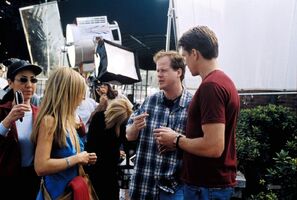 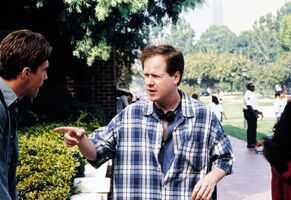 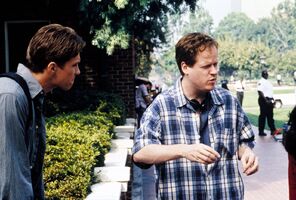 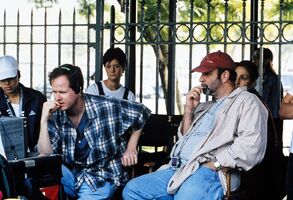 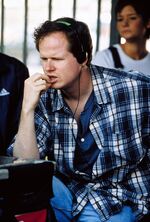 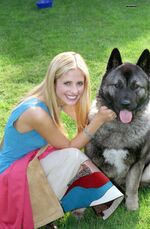 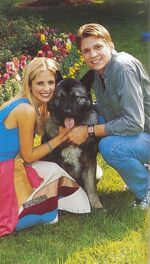 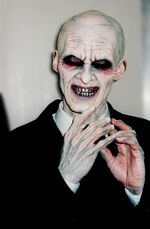