"Homecoming" is the fifth episode of the third season of Buffy the Vampire Slayer and the thirty-ninth episode in the series. Written and directed by David Greenwalt, it was originally broadcast on November 3, 1998, by The WB network.

THE THRILL OF THE HUNT — With Cordelia flaunting her sure win in the race for Homecoming Queen, she awakens the Prom Queen from within Buffy, who tries to enlist the entire gang to help her show Cordy how it's done, but some of their allegiances may be elsewhere. Meanwhile, the blood-sucking Mr. Trick assembles a host of killers in Sunnydale for a thrilling hunt to the death to bring down the two slayers.[1]

The Scoobies decide to share a limo for their last Homecoming dance. Scott hasn't asked Buffy, but after some prompting does ask her, so they join in the group plans. Buffy takes an early leave to bring blood to Angel, who is still very weak. She tells him she won't tell the others about him because they won't understand that he is better. She also tells him she is dating someone else.

Scott breaks up with Buffy the next day because he finds her too distracted all the time now, which she admits is true. She promises to do better, but it's not enough. As she watches him walk away, two men watch her from a van. They are connected via modem to Mr. Trick and an unnamed boss, who have video monitors set up in a mansion.

Deputy Mayor Allan Finch enters the Mayor's office. He reports that two German brothers who are major international terrorists have arrived in Sunnydale. The Mayor, Richard Wilkins III, chides him for not cleaning his hands enough. Finch looks scared and promises to do better.

At school, the gang sends Cordelia to tell Buffy that yearbook photos are being taken that day. Buffy is in the library training with Faith, who is expressing her views on guys. Buffy decides to go to the prom with Faith, since she has already bought a ticket. Cordelia gets distracted at the library door by two guys whose votes for homecoming queen she wants. She leaves without giving Buffy the message.

Buffy needs a recommendation from a teacher for her file, per the Principal's stipulation for her to re-enroll at school. She asks the teacher who taught "the class that changed my life," but is crushed when the teacher does not remember her. Buffy says that at Hemery, she was Prom Princess, Fiesta Queen, and on the cheerleading squad, but no one would remember her at Sunnydale High. She is bummed that her entire high school career will come down to one picture on 1/8th of a page, but Willow and Xander tell her that even that won't be there, since she missed getting her picture taken for the yearbook. They tell her that Cordelia was supposed to give her the message. Buffy confronts Cordy, who couldn't care less because it's not about herself. An enraged Buffy decides to run for Homecoming Queen against Cordy.

Meanwhile, Mr. Trick has organized SlayerFest '98, a competition in which its participants (for a fee) get to hunt the two Slayers. The competitors include: the twins Hans and Frederick Gruenshtahler working with an older man, the vampire couple Lyle and Candy Gorch, a demon named Kulak of the Miquot Clan, and a man named Frawley.

Xander and Willow, trying on their formal clothes in her room, admire each other's elegance. They then share a kiss, but break apart in guilt for cheating on Cordelia and Oz. The next day, Buffy is analyzing the Homecoming Queen competition with Oz, Xander, and Willow in the library. They all look very uncomfortable. It turns out that Xander is helping Cordelia, since he is her boyfriend, Willow is already constructing Cordelia's database, and Oz goes along with Willow.

As the evil-doers are honing their skills for their upcoming hunt, the competition at Sunnydale High School is heating up as well. Ethics give way to bribery with sweets and money. Buffy gets 15 minutes on Cordelia's database after she guilt trip Willow into secretly helping her. Xander and Willow sit down to talk, so Willow talks about the Homecoming Queen competition and the tensions between Buffy and Cordelia, but Xander thinks she's talking about their kiss and mentions that he has a whole new set of feelings for Willow, but quickly shuts up when he realizes what Willow is really talking about. Willow exclaims that the kiss upset the whole balance of the group dynamics, leading them to help Cordy out of guilt, and that has all led to the new hostility between Cordelia and Buffy. Willow is determined to do something to fix things.

When the limo arrives at Buffy's house, she gets in to discover not Faith, who was scheduled to be the first to be picked up, but rather Cordelia alone, holding a note from their friends saying that they want her and Cordelia to make up on the expensive ride, so they will be forced to spend some time alone together. Putting on the corsages that have been left for them, the two talk but make no progress. When the driver stops at their destination, they are surprised to discover not Sunnydale High, but a shack and some woods. Then the driver runs away. They find a TV, VCR, and video tape, so they play it. Trick addresses them as Buffy and Faith and informs them of Slayerfest '98. Despite Cordelia's desperate attempts at getting someone to realize that she is not Faith, she and Buffy are both targeted by the competitors.

Xander and Willow are moping at the dance. Even Giles's humor fails to cheer them up. Faith is livelier; she embarrasses Scott in front of his date by pretending to have gotten an STD from him. Meanwhile, Buffy catches one of her pursuers and forces details out of him. Cordelia, thinking she's going to die, tells Buffy she loves Xander. Buffy tells her she spent a year's allowance on the dress in an attempt to achieve one ideal moment in high school. For a moment, the two understand each other. The two fight off their adversaries and run to the school.

Meanwhile, Trick is dragged away from the mansion by two policemen. Buffy and Cordelia make their way to the library, only to find Giles knocked out and the Gorchs waiting for them. During the fight, Candy is dusted thanks to a spatula that Cordelia acquired. Lyle is infuriated and is ready to kill the two, but Cordelia finally does something good with her taunting skills and scares Lyle away when Buffy and Giles are down, by exaggerating her bad-assery. Buffy realizes the corsages they got in the limo were electronic tracking devices. She puts a device on one of the German brothers, who, when fired upon by his brother, fires back, both killing each other.

The policemen bring Trick to the office of Mayor Wilkins, who tells Trick that he needs to control rebellious youth elements during this important year. Trick, knowing the Mayor means business, agrees to team up with him.

Bedraggled, Buffy and Cordelia arrive at the Homecoming dance just in time for the announcement of Homecoming Queen, both believing the result to be more important than ever after all that they've been through. Devon announces that the vote was tied, so Buffy and Cordelia both smile at the idea of sharing the title, but it turns out the tie was between two other competitors: Michelle Blake and Holly Charleston. As the two winners make emotional speeches, Buffy and Cordelia walk out united in their disgust.

Buffy: "Okay, how 'bout... you vote for me and I don't beat the living crap out of you."
Jonathan: "That works good for me."
Buffy: "Tell your friends!" 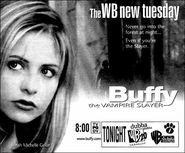 "Never go into the forest at night... Even if you're the Slayer."