"Hemery High School Yearbook 1992" is a promotional item produced for the Buffy the Vampire Slayer film in 1992, presenting characters in the format of a yearbook for Hemery High School. It was part of a folder with sheets of pictures and cast list from the movie.

Apparently, these items were only available for cast, crew, and members of the press, but eventually shared among fans. 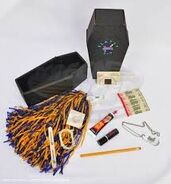 Items of the Slayer kit
Add a photo to this gallery
Retrieved from "https://buffy.fandom.com/wiki/Hemery_High_School_Yearbook_1992?oldid=189209"
Community content is available under CC-BY-SA unless otherwise noted.