"Help" is the fourth episode of seventh season of Buffy the Vampire Slayer television show, and is the hundred twenty-sixth episode in the series. Written by Rebecca Rand Kirshner and directed by Rick Rosenthal, it originally broadcast on October 15, 2002 on UPN.

CRUEL FATE — Buffy starts her first week counseling students at Sunnydale High and meets a teen named Cassie, who somehow knows her own death will occur in just a few days. Buffy, along with the help of the gang, rushes to find out the circumstances of Cassie's death and how to prevent it. Willow begins to make peace and settle back into Sunnydale life.

Once the lights are turned out at a funeral home, Buffy, Xander and Dawn climb out of caskets. They chat about Buffy's nervousness about her new job and the struggle she may face while trying to mix her Slayer job with being a counselor. In one of the caskets, the three find a deceased woman who soon rises as a vampire, and is promptly staked.

At the high school the next day, Buffy talks with various students who all have their own problems ranging from trouble with bullies and violence to boredom. Willow and Xander walk together and talk about Buffy's struggles and Willow's worries about her role in dealing with the impending Hellmouth danger and if she was truly ready to come back to Sunnydale. Xander assures her that she'll be fine, although it may take time, then makes sure that Willow's ready for what she's about to do. Willow silently nods before walking forward alone towards Tara's grave.

Buffy talks with more students, including her own sister. But one girl named Cassie Newton stuns counselor Buffy when she matter-of-factly informs Buffy that she's going to die next Friday. Buffy has tons of questions, but Cassie doesn't have many answers. She doesn't understand it, but Cassie just knows that she's going to die and that there will be lots of coins. As she leaves for Mr. Corrigan's trigonometry class, Cassie compliments Buffy's shirt and warns her against the danger of spilling something on it. Buffy reports this to Principal Wood, but he's not as helpful as she'd like. After spilling coffee onto her white shirt, Buffy gets suspicious and sends Dawn to befriend Cassie. Dawn catches up with Cassie and they talk about Cassie's friend Mike Helgenberg, who has continuously asked Cassie to the dance, and been rejected every time.

Willow investigates Cassie on the computer and finds Cassie's own site with tons of sad, morbid poetry. Dawn returns home from school and thinks the reason for Cassie's problem is Mike, but Buffy and the others don't pay much attention. Willow finds a website on Cassie's father that shows his troubled past with the law and alcohol. Buffy and Xander go visit Cassie's father and confront him with their suspicion that he may get drunk and hurt his daughter. Mr. Newton confidently denies the accusation, and then goes on about how his ex-wife only allows him to spend one weekend a month with his daughter. Buffy then finds out that Mr. Newton's weekend with Cassie is the weekend just gone. Therefore, not only does he not have the chance to hurt Cassie, but if Cassie's prediction is true, then he will not see her again before her death.

Satisfied that Mr. Newton is not involved, Buffy and Xander leave and bump into Cassie, who was waiting for them outside of her dad's house. Although she appreciates Buffy's efforts to find the cause, she knows there's nothing Buffy can do to stop her death. Xander asks her if she's planning to kill herself, which Cassie denies. She talks about all the things she wishes she could do — going to the dance, going to college, falling in love, as well as many other things. But she knows she never can. She makes it clear to Buffy and Xander that she doesn't want to die, it's just what is going to happen on Friday.

Meanwhile, a group of guys in red cloaks walk around a circle and burn pictures of Cassie on a tray in the middle. Still motivated to help Cassie, Buffy reads poetry from Cassie's site and continues to investigate with the rest of the gang. Buffy goes to the school basement and asks Spike if he knows anything about Cassie. Because he "hurt the girl," he's punishing himself and trying to stay away from the voices. He doesn't have any information for her and Buffy leaves him, thinking her presence hurts him more than when she's not there.

Upstairs, Principal Wood and another administrator search through student lockers for anything suspicious. Buffy catches Mike in the halls and drills him to see if he may have intentions of hurting Cassie because she rejected him. He makes it clear that he doesn't mind that much, and has already moved on to thinking about Dawn. A bunch of coins fall from one of the lockers, drawing Buffy's attention. Buffy takes one of the coins and the number of the locker where they came from and talks to the student the locker belongs to. After some violent prompting, the student confesses that some of his friends want to hurt Cassie.

Dawn and Cassie walk away from the school as Cassie reveals how she knows Buffy sent Dawn to befriend Cassie but it doesn't matter as the two are now clearly real friends. Just then a student named Peter approaches, and Cassie tells Dawn that nothing that is about to happen is her fault. Peter asks Dawn about the dance, but only to be a jerk, not to really ask her out. When an irritated Dawn turns back towards Cassie, she is gone, Peter having successfully distracted her.

At the school that night, the cloaked group gathers again around a circle of coins and one of the boys turns out to be Peter. He checks with the others to make sure the school is secure and that no one can get in or out. Then, he pulls a bound and blindfolded Cassie out to the circle and holds a meat cleaver to her neck. She is to be a sacrifice to a demon that will provide the boys with "infinite riches".

As Peter starts the ritual, Buffy suddenly rips off a cloak, unveiling herself to the group and then smacks him around a bit. She doesn't think the ritual was a success, but a large demon, Avilas, appears behind her, proving her wrong. Buffy fights with the demon and Spike shows up with a flaming torch to help seeming to have at least temporarily regained his sanity as he doesn't want Cassie to get hurt. Buffy uses the torch to burn the demon while Spike cuts Cassie free from her bonds. Cassie tells him, "Someday she'll tell you" which shocks Spike and he retreats away. Desperately, Peter moves towards the fried demon and wants to know where his money is. The burned demon leans up and bites Peter on the shoulder once before exploding into dust.

Buffy and Cassie walk away together, leaving Peter to deal on his own. A crossbow booby trap set by one of the cloaked boys nearly kills Cassie, but Buffy catches the bolt. Buffy is happy that she seemingly stopped Cassie's prediction, and tells the girl that one person can make a difference, to which Cassie responds that Buffy will. Just then Cassie gasps and unexpectedly falls to the ground, dead.

The next day, the Scooby Gang gather at Buffy's and solemnly talk about how Cassie died because of a congenital heart defect. She was always going to die, no matter what happened. Buffy feels as if she failed Cassie, but a devastated Dawn corrects her, saying Buffy didn't fail, since she tried to save Cassie, and it was because of her that Dawn and Cassie were friends. Buffy returns to work, knowing that while she will always try her best, sometimes she just can't help. 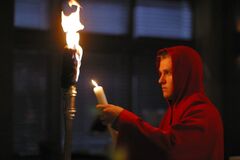 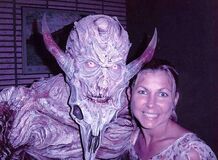 Retrieved from "https://buffy.fandom.com/wiki/Help?oldid=222417"
Community content is available under CC-BY-SA unless otherwise noted.