Edit
watch 03:36
Wiki Targeted (Entertainment)
Do you like this video?
Play Sound

"Hell's Bells" is the sixteenth episode of the sixth season of Buffy the Vampire Slayer, and is the one hundred sixteenth in the series. Written by Rebecca Rand Kirshner and directed by David Solomon, it originally broadcast on March 5, 2002 on UPN.

On the day of his wedding to Anya, Xander gets cold feet about their prospective life together when an odd stranger offers him a glimpse into the future.[1]

Buffy and Willow criticize their bright green dresses and talk about the rehearsal dinner from the night before. It was explained that Anya's friends are circus people, which explains their very odd appearances; surprisingly, the Harris family bought it. Willow has the honor of best man and Buffy, Dawn, and Tara are bridesmaids. Anya hugs both girls in excitement about their gowns, which she of course loves.

Xander tries to get dressed with his family and Anya's demon friends invading his apartment. Xander's parents arrive: Mrs. Harris rants about not being in the wedding pictures, and Mr. Harris expresses his distaste for the circus people on Anya's side. Xander's cousin Carol asks Xander if Anya's demon friend Krelvin would be interested in dating her. Outside on the streets of Sunnydale, an old man appears out of thin air and walks off purposefully.

Buffy forces Xander into his cummerbund and works on his bow tie while offering her happy wishes to Xander on his special day. Tara and Willow button Anya into her dress while the bride-to-be rehearses her vows, excitedly talking about how happy she is. Xander's uncle Rory shows off his "date" to Dawn, but his date is actually just one of the caterers. D'Hoffryn arrives along with Halfrek and Dawn greets them at the door. D'Hoffryn offers his very alive wedding gift in a box to Dawn.

Dawn continues to mingle through the crowd and encounters Spike with a goth date. Finally ready, Buffy and Xander proceed toward the crowd of mingling guests while reviewing the tasks necessary to keep Xander's parents out of trouble. Xander greets people and is suddenly assaulted by people complaining about problems. Xander's drunken father offers a toast to the waiting wedding attendees and insults the demons on Anya's side of the "family." Clem and another demon talk about how annoying the man is, but before a fight can break out between Mr. Harris and one of the demons, Buffy pulls the drunk man away.

The old man in a trench coat drags Xander away from the others and explains that he is Xander Harris from the future (despite the fact the old man has blue eyes and Nicholas Brendon has hazel-brown eyes, something Xander never seems to wonder about), and the wedding cannot take place. As proof, he shows the younger Xander the Sphere of the Future, a crystal ball that will show Xander his future. In a vision, Xander sits watching TV, yelling at Anya while their son runs around teasing Anya's part-demon daughter. Anya explains that she's going to make money while he sits around wounded and worthless. An argument breaks out as they talk about how he got injured helping Buffy, although that didn't save her life. Xander then sees himself with Anya and their two now-teenage kids eat at a restaurant while the teens fight and Anya bitterly notes Xander's drinking.

Years later, in their kitchen, Anya yells at Xander for ruining her life and blames him for her misery. He yells back, raising a frying pan - but the vision of the future abruptly ends as he hurls the pan at her. Xander, shocked by the visions, is warned by the old man not to marry Anya.

Buffy finds Spike alone and the two talk about the wedding and Spike's attempt to make her jealous with his date. After he finds that his efforts worked, Spike realizes it's best to just leave and takes his date away.

Willow runs into Xander in the kitchen and offers the final "best man" talk then leaves him to practice his vows. Anya continues to go over her vows in front of Tara, who advises against saying "sex poodle." As the music begins, Buffy arrives to get Anya, but Willow pulls her out of the room and breaks the news that Xander is gone. Stalling while Willow looks for Xander, Buffy uses the excuse that the minister is also a doctor and the ceremony will be delayed while he performs an emergency c-section.

Anya tries her vows one more time while elsewhere, Xander walks away in the rain. Mr. Harris and Mrs. Harris head back to the bar, complaining about Anya ruining the wedding. Buffy tries to stall the crowd with charades and juggling as Dawn chats outside with a teenage demon and both compare their embarrassing family and friends. Impatient, Anya heads out towards the wedding crowd, determined to get on with the wedding. The news that Xander is gone is accidentally spilled to Anya as Dawn talks to the demon teen and Anya freaks out.

Mr. Harris and other demons begin to argue and then a huge fight breaks out between the two sides of the wedding guests. Tara gets caught up in the battle, but Willow rescues her. Cousin Carol directs Anya to the man in the trench coat and Anya talks to him about what he did to scare Xander off. She finds that the man is really a demon she cursed many years ago who seeks revenge against her. He showed Xander false images about his future to ruin Anya's wedding.

She begins to cry and the demon strikes out at her, prompting Buffy to get involved. Buffy starts to attack the demon and Xander arrives to help save Anya. Anya explains to Xander that he saw only lies in those visions, but Xander isn't exactly relieved. Buffy and Xander finish the demon off and the crowd cheers. Fighting continues, but Anya breaks it up and everyone returns to his or her seats. Xander and Anya talk privately before the ceremony and Xander explains that he can't marry her.

Motivated by the fear of turning into an abusive drunk like his father, Xander refuses to allow himself the opportunity to marry Anya and ever hurt her in that way. Anya tries to convince him otherwise, but fails and Xander leaves her, forcing Anya to broken-heartedly walk down the aisle alone.

Buffy, Willow, and Dawn sit around at the house and talk about what happened with Xander and Anya. They feel sorry for both of them and wonder where Xander is. Meanwhile, Xander checks into a motel by himself. Sad and depressed, Anya sits alone until D'Hoffryn offers her sympathy, comfort, and her job as a vengeance demon back.

Dawn: "I thought Xander and Anya couldn't afford flowers."
Willow: "Giles sent 'em. Aren't they gorgeous?"
Dawn: "Yeah. I wish Giles was here."
Willow: "Me too. And I'm sure he'd much rather be here than fighting that nasty demon—"
Dawn: "Da-e-mon. In England it's daemon."
Willow: "Daemon, too right. But Giles's got responsibilities. And so Anya and Xander have flowers. And flowers. And more flowers. Ooh, it's going to be so pretty." 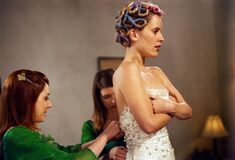