"Heartthrob" is the season premiere of the third season of Angel and the forty-fifth episode in the series. Written and directed by David Greenwalt, it originally broadcast on September 24, 2001 on The WB network.

On a routine patrol, Angel stakes a female vampire he recognizes from his past, but a moment too late. Her grief-stricken lover, Angel's old fighting buddy, is out for revenge for the present killing and a betrayal Angelus committed over 200 years ago.[1]

Wesley, Cordelia and Gunn return from defeating a group of demon worshipers. They discuss their full and unusual lives and why people would be obsessed with demons enough to worship them in the first place. The conversation eventually turns to the recent addition at the Hyperion Hotel, Winifred "Fred" Burkle, who has spent the last three months in her room (except when she enters the lobby for a few seconds before scurrying back) since returning from Pylea. Cordy notes how much she misses Pylea, and Wesley points out she was there for a week and became a queen, while Fred spent five years there either as a slave whose head nearly got cut off or a fugitive hiding in a cave alone. Another cause for concern is Angel, who has spent the summer at a monastery in Sri Lanka to help him cope with Buffy's death. Gunn points out that he suggested Angel got drunk and went to Vegas to get over Buffy, but Wesley responds that all Angel needs is peace and quiet.

Meanwhile, Angel fights monks who turned out to be Shur-hod demon. He kills them all and leaves the scene of battle, telling the pilgrims outside that he should have gone to Vegas.

Angel returns to Los Angeles and is eagerly greeted by his friends. He gives Cordelia a necklace, Wesley a 16th century dagger, and Gunn a shrunken head (all three gifts are greatly appreciated). Angel asks after Fred, and, despite Cordelia's attempt to cover, Angel guesses she hasn't left her room. He decides to go and talk to her. upon hearing a knock at the door, Fred tries to get rid of whoever is on the other side until she hears it's Angel, then she rushes joyfully to the door to see him. Invited into Fred's room, Angel finds the walls covered in writing, similar to her cave in Pylea. She has both arcane mathematical formulas and different phrases. Upon seeing a section with the words "LISTEN LISTEN LISTEN," Angel asks what she's listening for, and Fred responds: "The click in my head when everything makes sense." Angel invites her downstairs, but a scream from Cordelia shatters her sense of security.

Cordelia's visions (which have grown increasingly painful over the last few months) send the guys to intercept a party crashed by vampires. They find the vampires with two kidnapped humans in a car, and Angel stakes the female vampire. Before she turns to dust, the vampire asks: "Angelus?" Angel stares at the locket he had ripped off her neck and recognizes her as Elisabeth. Meanwhile, Cordelia recovers from her vision with the help of her ghost, Dennis, a relaxing bath, and some powerful painkillers.

In 1767, Marseille, France, Darla and Angelus spend time with Elisabeth and James. Angelus is annoyed with the loving relationship between the other couple. James steals a locket from a store window for Elisabeth — the same locket she was wearing at her staking. Angelus is also concerned with escaping the vampire hunter Daniel Holtz, who has been tracking him since Angelus killed the man's entire family.

In the present, James learns about Elisabeth's death and that Angel is responsible. He charges into the office of a special demon doctor, demanding a special treatment. The demon, a skin-molting creature named Dr. Gregson, questions James's ability to accept the price. James says he has already paid the price. At Caritas, Lorne sings, while Wesley and Gunn grill Merl for information. Merl reveals James visited Dr. Gregson earlier.

At the Hyperion Hotel, Cordelia tries to get Angel to talk about losing Buffy. She tells him it wasn't his fault, but he misunderstands and thinks she is telling him that it wasn't his fault that he killed Elisabeth. Angel doesn't want to talk about Buffy. Then, James emerges from the basement and attacks Angel, demanding to know why he took Elisabeth from him. Fred chooses that moment to emerge, and Angel yells at her to stay in her room, and she runs back. Angel and James two continue to fight, and Cordelia manages to hit James hard with a fire extinguisher, then tosses Angel a stake. Angel manages to stake James, but to no effect. Then Angel throws James outside into the sun, but he is similarly unharmed. Angel and Cordelia run for the sewers, and Angel throws James off temporarily with the scent of his blood, but James eventually finds them in a subway train.

A call from Wesley reveals that James has been made invincible by Dr. Gregson by having his heart removed, but it's not permanent and he will die when it wears off, though that part of the phone call is unclear as reception is poor in the sewers. As they fight inside the subway train, James questions Angel's knowledge of true love. Angel tells him that he had one true love but recently lost her. He assures James he understands what it is like to lose someone he loves. James disputes that this was true love, as he thinks that, if Angel loved and lost, then he would not want to go on either. Soon, the effects of the surgery wear off, and James crumbles into dust.

Angel allows James' comments about not being able to exist after losing the person he loved to upset him, but Cordelia convinces him that he honors Buffy by going on, as that is what she would want.

At a cantina in Puerto Cabezas, Nicaragua, a man presents contact information for a shaman to Darla, who quickly turns to sink her teeth into him. As he falls to the floor, Darla turns to leave the bar, revealing that she is in an advanced state of pregnancy. 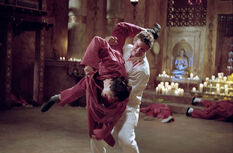 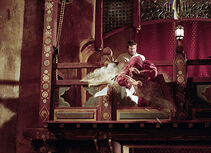 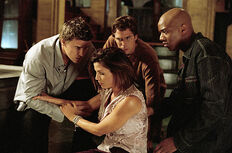 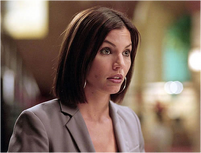 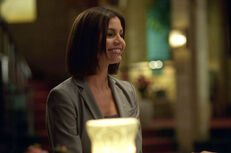