“So how come Halloween is such a big yawner? I mean, do the demons just hate how commercial it's become?”
―Buffy Summers[src]

Halloween was a holiday celebrated annually on the night of the 31st of October. Despite humans popularly associated with the supernatural, demons and vampires traditionally avoided hunting or attacking on Halloween and "took the night off" in order to avoid the cliché.

On Halloween night 1997, sorcerer and Chaos worshiper Ethan Rayne caused havoc by enchanting those who bought costumes from Ethan's Costume Shop to magically transform into whatever they were dressed as. Spike took advantage of this to attack Buffy Summers.[1]

On Halloween 1999, Buffy Summers and her friends found themselves at a frat party gone awry due to the accidental summoning of Gachnar, the demon of fear.[2]

On Halloween 2001, Buffy and the Scoobies celebrated Xander and Anya's announced engagement announcement, whilst Dawn Summers went out with her friend Janice Penshaw and two young vampires: Zack and Justin. Zach and Justin belonged to a rebel vampire posse who decided to break the rules and go hunting in an attempt to show they were rebels.[3]

Wolfram & Hart traditionally celebrated Halloween with an annual Halloween bash organized by the firm's Entertainment Division. On Halloween 2003, Wolfram & Hart Los Angeles branch, then under the management of the Angel Investigations team, organized their annual Halloween bash. Strange events occurred because Lorne, the new head of the Entertainment Division, had his ability to sleep removed to cope with the demands of his new job; lacking the ability to sleep while still possessing the need to do so, Lorne's empathic subconscious eventually physically manifested as a means of coping with the subconscious conflicts that Lorne would normally have processed as he slept. It went around, attacking and seemingly killing all those who had recently angered Lorne, though it vanished when Lorne's ability to sleep was returned.[4]

On Halloween 2008, the first Halloween after the creation of a new Seed of Wonder and the restoration of magic on Earth, it was formed a tradition of celebrating Halloween at Sunnydale, in "celebration of the occult at the town that proved its existence."[5] Andrew Wells stole the Slayer Handbook and returned to Sunnydale, planning to use it and the new rules of magic to his advantage to resurrect Jonathan Levinson and Tara Maclay in an attempt to atone for his past sins; however, his efforts attracted a Soul Glutton. After the creature was dealt with, Buffy and Willow convinced Andrew not to go through with it.[6]

Buffy in her costume.

Willow as a rocker chick.

Willow as a ghost.

Cordelia as a cat.

Buffy and Xander transformed in their costumes.

Giles as a Mexican. 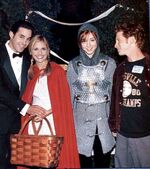 Anya dressed as a bunny. 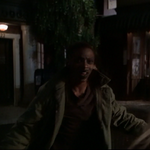 Xander as a pirate and Anya as a Charlie's Angel.

Devlin as a human.