"Halloween" is the sixth episode of the second season of Buffy the Vampire Slayer and the eighteenth episode in the series. Written by Joss Whedon with Carl Ellsworth and directed by Bruce Seth Green, it was originally broadcast on October 27, 1997, on The WB network.

TRICK OR TREAT — Buffy, Willow and Xander are recruited by Principal Snyder to trick-or-treat with the neighborhood kids, but the night doesn't turn out as they had planned when Buffy's costume causes her to lose her slaying ability and the other kids transform into their costume characters. Meanwhile, when Giles begins to paste together the night's events, he learns that it's his past that is making this a very haunted Halloween.[1]

Buffy and Angel finally agree to a date, but Buffy is delayed at Pop's Pumpkin Patch by a vampire. Another vampire films the fracas from the shadows. While Angel waits at the Bronze, Cordelia shows up. When Buffy finally arrives, she is turned away by Cordelia's sharp tongue. Cordelia continues to hit on Angel, unaware of his history.

The next day, Principal Snyder forces Buffy, Willow, and Xander into chaperoning children while they trick-or-treat. Buffy would rather take a break as, contrary to expectations, on Halloween vampires and demons take the night off. Later, Larry, the school bully, threatens Xander while asking him about Buffy, who intervenes smashing Larry into a soda machine. However, instead of being grateful to Buffy for rescuing him, Xander is upset by the damage that does to his reputation.

Buffy, wanting to know more about Angel, comes up with a plan to distract Giles and has Willow sneak in to take one of Giles's Watcher diaries. When Buffy and Willow go through it, they find a picture of an 18th century woman. Buffy is worried because the drawing of the woman makes her look more sophisticated and beautiful than Buffy. Willow points out that she looks like a noble woman and being beautiful was her job. Cordelia comes in and taunts Buffy about having to take over comforting Angel the previous night. Cordelia asks them about Angel, wanting to know why he's never around during the day. Buffy and Willow try to tell her that he's a vampire, but she thinks they are lying. She says Buffy is just trying to scare her off because she's afraid of the competition.

To dress up for Halloween, the gang head to Ethan's Costume Shop, where Willow gets a ghost costume and Xander buys a toy gun to go with his army fatigues from home. Buffy and Xander apologize to each other about what happened with Larry, with Buffy promising to let Xander get pummeled from now on. Then Buffy finds a beautiful 18th-century pink dress — one that matches the drawing that she had seen from Giles's Watcher files on Angel. Ethan Rayne appears and makes her an offer she cannot refuse.

Spike is reviewing Buffy's recorded fight when Drusilla comes to tell him that someone will make Buffy weak the following night. Spike is confused, since the following night is Halloween when nothing happens, but Drusilla tells him someone new has arrived in town. Meanwhile, Ethan is chanting to a Janus statue in the back room of his shop.

On Halloween night, Buffy manages to convince Willow to wear a black mini-skirt and a long-sleeved crop shirt, making her very shy. The doorbell rings and Willow takes the opportunity to cover her outfit with the ghost costume before Xander sees it. While taking the children trick-or-treating, people start turning into their costumes' personae: Willow collapses and then she becomes a real ghost (wearing the skimpy outfit), Xander a soldier, and Buffy an 18th-century girl.

Willow convinces Xander, who has no recollection of her, to not shoot the transformed people in the street with his now real gun. They find a disoriented Buffy, who is frightened and confused by the modern world. Willow rushes them to Buffy's house, where her mother is conveniently not home. Outside, Cordelia screams and Xander rushes out to save her. Willow, being unable to get hurt due to her ghostly status, goes to Giles for help. While Cordelia searches the house, Angel shows up and takes Buffy into the kitchen. As Angel tries to handle a vampire that has sneaked into the house, he reveals his vampire face. Buffy is horrified and runs from the house. Meanwhile, Spike has also appeared and revels in the chaos around him.

At the library, Willow and Giles realize Cordelia has not changed into a cat, like the costume she is wearing, having rented her costume from a different shop from Ethan's. They head to the shop, where Ethan greets Giles by the nickname "Ripper." He orders Willow to leave then physically persuades Ethan to tell him how to reverse the spell.

Spike is looking for Buffy, who enters an alley and meets Larry, now a pirate. Xander arrives just in time to beat up Larry before he can attack Buffy. When Angel and Cordelia arrive, Buffy shrinks back and tells Cordelia that Angel is a vampire. Cordelia, still thinking Buffy is lying, tries to explain to Angel that Buffy has some strange ideas about him but gives up and just tells Buffy that Angel is a good vampire. Willow then shows up to warn them of Spike. The gang tries to barricade themselves inside a warehouse, but Spike's gang breaks in. Just as Spike is about to kill Buffy, Ethan reveals the secret to ending the spell and Giles throws the statue to the floor, smashing it to pieces, breaking the spell. Buffy recovers in time to defeat Spike and he flees.

Willow wakes up on the porch where she "died," now wearing the ghost costume again. She takes off the ghost costume and confidently walks across the street in her risky outfit. Unbeknownst to Willow, Oz drives by at that moment and admires her from his van.

In her bedroom, Buffy confesses to Angel that she was trying to impress him; much to her surprise, he tells her that he hated those people back then — especially the noble women. Angel also reveals that he wanted someone exciting. They kiss. The next day, Giles returns to the store to find a note: Ethan has promised to return soon. 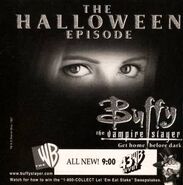