Alive (due to time reversion)

"Lorne: The Music of the Spheres"

The Groosalugg, nicknamed "Groo" by Cordelia, was a half-demon warrior and champion of Pylea. His name meant "brave and undefeated."

The Groosalugg was a native of Pylea, a hell dimension where humans were treated as slaves and called cows. He was part demon and part human, but apparently more human since his only non-human physical characteristic was a pair of brightly colored eyes. He also spoke with unique syntax, bordering on kitsch. Because of his human heritage, he was banished to the "Scum Pits of Ur". He entered every contest of skill and daring that he could in an attempt to die. Instead, he won every match, defeating Flame beasts, Drokken Beasts, and everything else he went up against. He once happened upon a herd of Bur Beasts and was forced to stand perfectly still for eleven days and nights. He earned a reputation for bravery and combat skill, and as such he wandered the countryside as an undefeated champion, or "Groosalugg".

A prophecy foretold that the Groosalugg would one day "com-shuck", or mate, with the entity that has "the curse," which turned out to be Cordelia Chase's visions. After the two had mated, Cordelia's visions would be passed on to him. Since Pylea was dominated by monks loyal to Wolfram & Hart, this would put the instrument of The Powers That Be under the control of the Senior Partners. Cordelia did not want this, at first because she believed the Groosalugg to be more demon-like, but this objection fell when Cordelia met him and saw that he was, in fact, very handsome and nearly human. However, Cordelia still did not want to consummate their relationship because she did not want to lose the visions. Groo ended up proving that he was a good man, not a tool of evil, and helped Cordelia and the rest of Angel Investigations to escape Pylea, albeit after being defeated by Angel in combat thanks to Angel transforming into his more feral Pylean self. Groo was installed as monarch of Pylea, the first to preside over the freedom of the human former slaves.

Angel and Cordelia were close to starting a relationship when Groo unexpectedly appeared in Los Angeles. He explained that he had been deposed in a revolution on Pylea, and decided to find Cordelia again. The feelings that Cordelia had for Angel were immediately put on hold, and instead, she chose to rekindle her romance with Groo. She even went as far as to find a mystical spell which allowed her both to have sex with Groo and retain her visions and gave him a makeover to have him resemble Angel right down to his hairstyle. Angel was jealous of Groo for many reasons, including that Cordelia chose Groo over him and that Groo was just as formidable a fighter as himself. For a time, Angel was concerned that Groo would replace him since he possessed equally dangerous combat skills while he lacked most of Angel's weaknesses, but Wesley Wyndam-Pryce assured Angel that he remained their reason and drive for fighting the good fight in the first place. Despite proving his continued worth to the group with a victory against a life-sucking tree demon that Groo could never have defeated himself, Angel gave Cordelia money and asked that she and Groo go on an extended holiday since he was unable to stand being witness to their relationship.

When Cordelia and Groo returned, they found that some terrible things had happened in their absence, such as Connor being stolen by Holtz and Wesley having betrayed the team in an attempt to protect Connor from a prophecy that seemed to foretell Angel killing his son. Cordelia immediately began to pay more attention to Angel, and Groo started to realize that Cordelia did not love him but rather Angel. Groo finally mustered up the courage to tell Cordelia this, and he then left Los Angeles.

When Los Angeles was sent to Hell, Groosalugg resided in Silver Lake and served as champion to Lorne, Lord of Silver Lake. During Angel's visit to Lorne, Groo offered the ex-vampire his services whenever he needed them. He appeared riding what appears to be a black horse with wings. When Lorne reassembled the Angel Investigations team in order to help Angel fight the other Demon Lords' champions, he helped by breaking the chains of Angel's dragon, allowing it to join in the fight. Later, he and his winged horse, Cordelia, slayed the dragon horde sent by Wolfram & Hart. Groosalugg was killed by an enraged Illyria.

Groosalugg was resurrected due to the time reversion by the Senior Partners. Angel later asked him to look after his dragon, since it was impractical for him to continue living in the restored Los Angeles. Upon learning the dragon's name, Groo expressed excitement at having "two Cordy's" to call his own.

Sometime after aiding Angel, Illyria and Lorne in preserving the "Music of the Spheres", Groo was requested to assist Spike in Las Vegas. He traveled to the city on his dragon, Cordelia, and arrived just in time, saving Spike from falling off of a building.

“LET US DO CLASH!”
―The Groosalugg's first words in Spike #2[src]

Groo possesses numerous bizarre traits: he is impish yet charming, charismatic yet disarming, manly and heroic yet innocent and bubbly. Groo is a gentleman and due to how he was raised and his internalized nature, he has impeccable taste and manners, fit to be a King, although he is far more modest and humble than most Kings. Despite having been abandoned at an early age, he seemed to bear no ill will to those responsible, as seen by the apparent comfort he exhibits when in the company of demons, seemingly viewing them as equals. He is a positive person and is humorously misunderstood most of the time since he finds it hard to express himself on Earth, since it is so different to what he has known all his life. He has a big case of foot-in-mouth disease, and the funny thing is he doesn't know it. In battle however the story is completely different. Fighting is a universal language after all, and Groo speaks it so fluently that it is strange to compare his strong, determined, knowledgeable combatant persona with his seemingly yet adorably docile, soft natured, giddy personality under normal circumstances.

Despite his fierce warrior nature he is surprisingly sensitive, realising Cordelia and Angel's growing attraction for one another and nobly if sadly stepping aside for what he knows is the right thing to do.

Initially, Groo possessed long black hair and dressed in medieval clothing. Upon arriving in Los Angeles, however, he was given a makeover resembling Angel, right down to wardrobe and hairstyle. By the time of the Fall of Los Angeles, Groo had returned to his original appearance.

According to Cordelia's remarks in 'Tomorrow' he appears to like to mix tuna fish with ice cream. He has a flair for interior decoration and claims that his mother's name was 'pommegranate'.

Groo in Angel: After the Fall 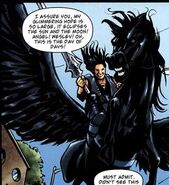 Groo and his winged horse, Cordelia. 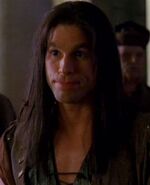 Retrieved from "https://buffy.fandom.com/wiki/Groosalugg?oldid=221261"
Community content is available under CC-BY-SA unless otherwise noted.