"Graduation Day, Part Two" is the season finale of the third season of Buffy the Vampire Slayer and the fifty-sixth episode in the series. Written and directed by Joss Whedon, it was originally broadcast on July 13, 1999, on The WB network.

ASCENSION IS AT HAND IN THIS GRIPPING CONCLUSION — As the hours tick away to the fateful graduation of Sunnydale High School's Class of 1999, the impending doom of the Mayor's ascension and transformation into pure demon hangs heavy with Buffy. With Angel near death, Buffy must risk her own life and defy the orders of the Watchers Council in order lead a campaign to save the world.[1]

Buffy stands stunned for a few moments, then drops the knife and escapes from the rooftop, just before Mayor Wilkins enters the empty apartment with a group of vampires. Devastated by the thought of losing Faith, he orders the vampires to find her.

At the library that night, Xander and Giles search for information on Olvikan, knowing the Mayor will transform into it. Cordelia arrives and demands to know what happened between Buffy and Wesley. Giles explains that Buffy has severed ties with the Watchers Council and no longer needs a watcher, so Wesley will be leaving. Cordelia is unhappy, saying that Giles was fired but he still hangs around like a 'big loser' and asks why Wesley has to leave. Xander, tired of her complaining, reminds her that they're busy trying to avert a massacre, and asks if she wants to help with research. She agrees but ironically laments on how she thinks Buffy is selfish.

At the Crawford Street mansion, Willow watches over Angel; delirious, he mistakes her for Buffy and confesses how much he needs and loves her. When Buffy finally returns, she sends Willow and Oz away. Angel, verifying that's it's actually Buffy he's talking to this time, tells her he didn't want to die without seeing her first. She tells him he's not going to die and he says that it's okay and he's ready to die. She explains that the blood of a slayer is the only thing that can save him. However, as Faith is no longer an option she is willing to let Angel drink her own blood so that he will be cured. She reasons that if he doesn't completely drain her blood, she could still survive. He weakly refuses, but she strikes him repeatedly to bring out his vampiric side, then pulls his head to her throat. He drinks deeply and cures himself, pulling away when Buffy loses consciousness from loss of blood.

Angel rushes Buffy to hospital, explaining that she's lost a lot of blood. The doctor questions Angel about what happened and Angel rips off the handle to the door and tells him to just help her. The doctor assumes they've been doing drugs, but Angel stresses that it's not drugs, something just bit her, and she's lost a lot of blood. The doctor tells him to wait outside and Angel asks for a phone so he can call Giles and the Scoobies. In another room, a doctor tells the Mayor that Faith's head trauma coupled with massive blood loss means she is unlikely to regain consciousness. The Mayor notices Buffy in bed, and tries to smother her until Angel tears him away. The Mayor, crazed with grief, promises revenge Angel and his "whore" causing Angel to throw him across the room. Regaining his composure, the Mayor leaves with a message not to miss the second act, "with all kinds of excitement." The Scoobies arrive, and Angel explains to them what happened to Buffy. Xander specifically remarks that Angel was willing to save his own life by feeding on the woman he loved. Giles persuades Angel to leave the hospital since it's almost sunrise.

Dreaming, Buffy visits Faith, who is packing up her apartment. Faith says human weakness never fades, "not even his." She tells Buffy that it's time to go and then Buffy wakes up in the hospital bed. She walks over to Faith and kisses her forehead, then strides into the waiting room, telling her friends to get ready for war.

At school, Buffy outlines a plan which relies heavily upon Xander's past mystical military knowledge and discusses what the Mayor's human weakness is. Eventually Angel realizes it's Faith, given the Mayor's grief at the hospital. Wesley arrives and Buffy tells him the Watchers Council is not welcome. However, he tells her that he isn't there on behalf of the Council, but just wants to help. Grateful, Buffy allows him to remain and everyone starts to set up.

Meanwhile, the Mayor explains to his group of vampires that when the eclipse takes place, he wants the vampires to keep the people from running, as he must feed within the first few minutes to sustain the change. Angel and Xander get to work creating a bomb, which Giles is assigned to detonate. While putting away books, Cordelia and Wesley discuss their feelings and finally kiss, and discover they have no sexual chemistry at all. Oz reassures Willow that they'll make it through this and they share a kiss. In the library, Angel tells Buffy he'll simply disappear when the battle is over, because to say goodbye would be too painful. Buffy is upset, but doesn't lose focus as she pulls out the most important weapon of the upcoming battle: Faith's knife, still covered with her blood.

At graduation, the Mayor starts the commencement address talking about how that day is the centennial anniversary of Sunnydale. He starts to go into the meaning of graduation and change, making Buffy worry he's going to read the whole speech. The Mayor then mentions that there's been losses, and people who should be there, aren't. Just then the eclipse begins and the Mayor starts to feel pain as his Ascension starts. He regretfully drops his cue cards, and begins to transform in front of everyone, becoming a gigantic 60-foot snake demon. Vampires arrive behind everyone to catch anyone who tries to escape. The parents and teachers scatter, and the students gather together in one large group as the monster towers over them.

At Buffy's signal, everyone rips off their robes, revealing weapons and crosses. Under Xander's guidance, the students attack the demon with flame throwers and flaming arrows. Some students break from the group and run in fear — right into the mayor's vampires. Students in the rear, including Oz, mount a ranged counterattack with flaming arrows, driving the vampires back into another group at the rear led by Angel. They fight the vampires and are able to stop them from attacking the students, however Wesley, who accompanied Angel's squad, is downed with a single punch and spends the rest of the fight lying on his back asking for help.

The attack on the Mayor continues, however Larry is killed when the snake swipes him with its tail. Principal Snyder starts ranting and yelling that he will have order, telling everyone he will have quiet. He yells up at the demon that he's on his campus now and starts to rant even more but is suddenly eaten by the snake-demon in mid-lecture. Buffy tells everyone to fall back, and Xander leads them down while telling them to prepare for hand-to-hand combat. Willow wishes Buffy luck before leaving. The vampires attempt to attack the students, only to be astounded when almost the entire graduation class plow down the stairs, more than ready to fight. Cordelia manages to stake one, Jonathan throws himself on a vamp, however Harmony is grabbed and bitten.

Suddenly, Buffy yells up to the demon-mayor, taunting him while holding Faith's knife which is still covered in her blood. She then starts to make a run for it as the monster gives chase. She leads him through the school as he smashes the place apart following her. Buffy reaches the library, then dives through a window to the outside where Giles is waiting. The demon smashes through the doors to find the room filled with explosives. He says: "Well, gosh." Giles then hits the detonator, killing the Mayor, obliterating the library, and completely destroying Sunnydale High School. Everyone present watches as the building goes up in flames.

As Wesley is taken away in an ambulance, Giles congratulates Buffy on a job well done, presenting her with her diploma, which he pulled from the rubble. After he leaves, Buffy sees Angel at a distance. The two stand and look at one another for a brief time before Angel turns and walks off into the night.

Buffy meets up with her friends and they prepare to head for home. Before they do, Oz tells them they should take a moment to reflect on the fact that they survived. Buffy comments that it was a hell of a battle, but Oz corrects her he doesn't mean the battle: they survived high school. After taking the moment, the friends walk away from the remains of the school. A charred yearbook lies nearby bearing the legend: "The future is ours."

Xander: "Guys, we blew up the school! It's the best day ever!" 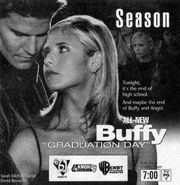 "Tonight, it's the end of high school. And maybe the end of Buffy and Angel."