"Goodbye Iowa" is the fourteenth episode of the fourth season of Buffy the Vampire Slayer, and is the seventieth episode altogether. Written by Marti Noxon and directed by David Solomon, it originally broadcast on February 15, 2000 on The WB network.

MOTHER MAY I — Buffy and Riley's relationship is put to the test when she investigates Professor Walsh's death and comes up against the Initiative's secret weapon. While Buffy is trying to find a way to save Sunnydale from rogue warrior demon on the loose, Riley becomes paranoid and delusional and challenges Buffy when he discovers that his mentor has been killed. Elsewhere in town, Spike has become the outcast among demons since he has taken up with the Scooby-Doo Gang.[1]

Buffy fills the gang in on everything that's gone on since she started to work with the Initiative, and they question whether Riley was involved in the trap Professor Walsh set for Buffy. Buffy arms the group with weapons and makes plans to hide out in Xander's basement. Riley shows up at Giles' place asking Buffy for information, and becomes upset when he recognizes Spike as "Hostile 17." Riley does not want to accept what the rest of them are saying about Professor Walsh and the Initiative.

Leaving Professor Walsh's lifeless body, Adam escapes the Initiative through a vent. He approaches a young boy playing alone and questions him about his nature. Dr. Angleman slips in a pool of blood as he enters Room 314 and finds Professor Walsh stabbed to death. When Riley and Forrest see Walsh's body, Forrest accuses Buffy of staking Maggie.

Giles is grumpy when he wakes up in Xander's basement the next morning. The girls are watching cartoons when a news story comes on about a young boy who has been killed and mutilated. Believing it to be the recently captured Polgara demon, Buffy goes after it. Riley — against Dr. Angleman's orders — also instructs the commandos to search for the Polgara. He and Buffy both end up at the park where the boy was killed. While Buffy tries to apologize to Riley, Riley informs her that Walsh is dead and asks if Buffy is happy about that.

Willow goes to Tara's dorm room, planning to find the Polgara by calling on Thespia in a spell that shows nearby demonic activity. However, Tara secretly sabotages the spell and it fails to work.

Buffy searches for information at Willy's but Riley also shows up, very angry. He is shaking and sweating and scratching his hand so badly that it bleeds, as he questions Buffy's intentions and pulls a gun on an innocent woman. Buffy consoles Riley as she sees that he is sick and only getting sicker, leaving him at Xander's to rest. When Riley wakes up, Willow tries to stop him from going after Buffy but he pushes her to the ground and runs.

Meanwhile, at Willy's Place, Spike is badly beaten by demons for associating with the Slayer and hunting their kind. They tell him if he is seen around again, they will kill him.

Disguised as a scientist, Buffy gets herself and Xander — dressed in fatigues — into the Initiative. They overhear Dr. Angleman talking to another scientist about their commandos having withdrawals from the drugs they had been secretly putting in their meals.

Adam is searching for answers about the world, and has returned to the Initiative so he can get answers about himself and who he is. He has a disk drive in his chest and when he inserts a disk labeled "Adam" he offers information that reveals that he is part human, demon, and machine. He explains that even though Riley had a real mother, Maggie was also his mother as she shaped and built him into a human machine for the Initiative. Adam kills Dr. Angleman and injures Riley before escaping again. The other commandos enter and take Riley away.

The next day, Buffy talks to Willow about how Adam is out there and very dangerous. At the hospital, Riley lays in bed holding a scarf Buffy gave him earlier. Even though Buffy cannot see him, he has part of her to hold on to. 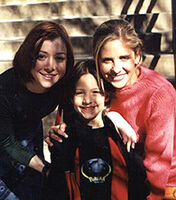 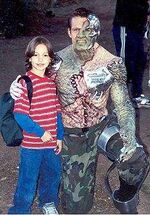