"Gone" is the eleventh episode of the sixth season of Buffy the Vampire Slayer and the one hundred eleventh episode in the series. Written and directed by David Fury, it originally broadcast on January 8, 2002 on the UPN network.

Buffy's efforts to help Willow's recovery are disrupted by a run-in with an intrusive social worker and a spat with Spike. Then, she's mistakenly zapped by an invisibility ray wielded by Jonathan, Warren and Andrew. At least she gets a new hairdo.

Buffy and Dawn remove all possible sources of magical "temptation" they can find from the house, to Dawn's evident annoyance. Buffy finds Spike's Zippo and after holding it a few seconds, tosses it in the collection box. Meanwhile, the Trio use the Illuminata diamond they stole to complete an invisibility ray.

Buffy feels that life is unraveling since Willow's incident involving Dawn, a car, and Willow "high" on magic. Dawn is barely speaking to Willow or Buffy — Willow because of her irresponsibility with Dawn, and Buffy because she let it happen by not being around enough, so she is only talking to Xander. Spike arrives under a blanket looking for his lighter and Buffy denies seeing it. Willow is contrite about her misdeeds, and Buffy apologizes for being too self-involved with her own problems to notice Willow hurting.

A social worker named Doris Kroeger comes to the Summers residence to check on how Buffy's doing as Dawn's legal guardian, but Buffy thought it was the next day and hadn't prepared for it. As Buffy opens the door, Dawn makes a comment about the car accident; her arm is in a cast; and Xander is taking her late to school. The living room is scattered with Willow's old spell ingredients and objects, making a mess and looking like drugs. Buffy tries to explain, saying it's "magic weed." Doris sees Spike and gets the impression that Buffy has a punk boyfriend who is sleeping over with her, since he has a blanket. Doris also appears to disapprove of Buffy living with another woman, one who is sleeping during the daytime. Doris tells Buffy that her case does not look good and she will recommend immediate probation, and Buffy might lose custody of Dawn later on. After she leaves, Spikes gets his lighter back from Buffy who had put it in her pocket and as he leaves he calls Buffy "Goldilocks," a nickname she says she hates, and he tells her how much he likes her hair. Alone in her bedroom, Buffy cuts a lot of her hair off, then she goes to a hair salon and asks the hairdresser to make her look "different."

The Trio are just outside, about to make themselves invisible so they can see naked women inside a spa. However, when they see Buffy, Andrew and Jonathan panic and start a tug of war over who is going to use it first. They accidentally overload the invisibility ray and the beam hits Buffy, making her waver and vanish (along with a dumpster, traffic cone, and fire hydrant).

Anya and Xander are planning their upcoming wedding at the Magic Box. The door opens but no one enters. Buffy's voice comes out of nowhere — she is having fun being invisible. Xander worries about it, assuming it was probably Willow misusing magic, and he goes to talk to her. Buffy goes out to have invisible fun in Sunnydale. "I'm the ghost of fashion victims past," she moans to a woman, wearing an outdated cap. She then drives off with a parking inspector's van.

Buffy drives to the Department of Social Services. Using her invisibility to its full advantage, she tricks the Doris into behaving in a bizarre manner and replaces the Summers report with pages consisting entirely of repetitions of "All work and no play makes Doris a dull girl." The social worker tells her supervisor, who believes that she is having a mental break with reality and sends her home, saying that he will send someone else to re-inspect the Summers' home the next day.

Buffy then heads to Spike's and begins touching and grabbing him, until he realizes who she is. "I told you to stop trying to see me," she finally jokes and then she and Spike go underground for sex. In the meantime, Xander confronts Willow, but she knows nothing about the invisibility and is offended that she is automatically being blamed. She leaves in a huff to try to figure out what happened to Buffy. Xander ends up meeting up with Willow at the site of Buffy becoming invisible. Willow keeps being tempted by magic, but uses her brains and deduction instead of magic, and figures out that the perpetrators are the drivers of the black van they've been seeing around Buffy. She gives Xander a traffic cone that was also made invisible, and he takes it back to the Magic Box. Xander and Anya do research, and discover that the invisibility ray is causing the structure of the traffic cone to break down. Anya is too self-involved to realize the implications, but Xander realizes that the same thing will happen to Buffy if the invisibility isn't reversed.

Meanwhile, Warren is trying to fix the invisibility ray but says that Buffy will die from the overload of radiation she is getting while she continues to be invisible. He finds no problem with that, but Andrew and Jonathan are upset and do not want to kill her, and so Warren grudgingly agrees to fix her. Xander then runs to Spike's crypt in search of Buffy, where he finds Spike in bed. He's actually having sex with Buffy, but to Xander's eyes, Spike looks naked and alone, and Spike explains that he's doing push-ups. Xander has a chat with Spike, wanting to know where Buffy is, and Spike honestly says that he hasn't "seen" her. Throughout the conversation, invisible Buffy gropes and physically teases Spike. Spike tries to act normal, somewhat unsuccessfully. Xander finally leaves, disgusted by Spike's odd behavior, telling Spike that he really needs to get a girlfriend.

Buffy wants to continue their physical activities, but Spike tells her that he is tired of being with her and not really having her. He says the only reason she came to see him is that she thinks she's not really there, because she's invisible. He asks her to leave if she isn't really going to be with him. He is frustrated with her carefree attitude and doesn't appreciate the way she seems to be using the invisibility as an excuse to escape her real life. She protests, but eventually leaves. She doesn't do too well at home when she scares Dawn, who has the same frustrations as Spike, combined with extreme worry for her sister. The bad stuff keeps on coming when she gets the message from Xander and Anya on the answering machine about the effects of the invisibility ray. Meanwhile, Willow has looked up the van by hacking into the DMV records, and has figured out who owns it. She goes into their lair in Warren's mother's basement, but is captured by the Trio, who have made themselves invisible. Jonathan then calls Buffy (disguising his voice so she can't identify him) and tells her that The Trio has kidnapped Willow and tells her to meet them at the arcade.

Buffy does so. However, Jonathan, Andrew, and Warren have also made themselves invisible, and Warren is holding Willow hostage. Warren lies to Buffy, telling her that he is going to reverse the mechanism into making her visible. But Willow points out that he's put it on a setting that is going to kill her. Warren knocks her to the ground and aims the gun at Buffy, telling her that she can't see them. However, what he didn't count on was Buffy's Slayer training and experience, providing her with some ability to sense the invisible villains. A scuffle ensues. Warren ends up in the ball-pit, Andrew ends up in the pinball machine, and Buffy ends up holding Jonathan. Willow, who has changed the frequency, aims at Buffy, Jonathan, Andrew, and Warren, making all four visible again.

"So, you three have what? Banded together to be pains in my ass?" Buffy asks. Warren stands firm, proclaiming himself and the others to be Buffy's "archnemesises-ses." After a smoke-bomb goes off and after scuffling to open the door, The Trio escape. Buffy and Willow sit on the curb outside and talk about their struggles today: Willow explains that while she found the Trio without magic, she was tempted to use it while Buffy admits that, while she's still struggling with being alive, when she learned the full effects of the invisibility ray she realized she doesn't want to die. The two friends sit and reflect on their small but significant steps to overcoming their problems.

Buffy: "Watch who you bully, kid. She might be the next chosen one." 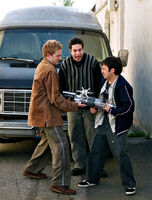 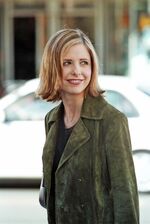 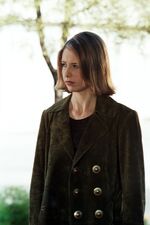