"Go Fish" is the twentieth episode of season two of the Buffy the Vampire Slayer television show, and the thirty-second episode in the series. It was directed by David Semel and written by Elin Hampton and David Fury. It was originally broadcast on May 5, 1998, on The WB network.

SOMETHING FISHY — When a monster starts preying on members of the high school swim team, Buffy takes it upon herself to become the protector of the star players. Meanwhile, Xander goes undercover to discover the truth about the missing teammates and ends up revealing a rarely seen side of himself.[1]

At the beach, the Sunnydale High swim team is celebrating their latest victory, while Xander complains about having such a big celebration just for the swim team. Buffy sulks on a rock, watching the ocean. Cameron Walker, another member of the swim team, approaches Buffy and starts sputtering out poetic words. Buffy tries to scare him off, but he says he's looking to talk. Meanwhile, Jonathan is being dunked in a bucket of ice water by members of the team. Buffy rescues him and scares off the two bullying swimmers. However, Jonathan is angry with Buffy for saving him and tells her to leave him alone. The bullies, Dodd McAlvy and Gage Petronzi, walk off and talk about how weird and scary Buffy is. Dodd suddenly stops, while Gage keeps walking. He smells something bad but goes on anyway. He walks by without seeing Dodd's body, seemingly skinned apart. A mysterious creature walks into the sewer.

The next day, Willow is teaching a class, and, as she is walking around checking people's work on their computers, she sees Gage playing solitaire instead. She tells him off, but he doesn't seem to care. After class, Principal Snyder tells Willow that they're still unable to find a replacement for Ms. Calendar, so she'll have to continue substituting for the time being. Willow informs Snyder that Gage is failing because he doesn't show up for tests or do homework. Snyder is not interested; he tells her that, as Gage a member of the swim team, he's under much more pressure than the rest of the students, and demands that she change Gage's grade from an F to a D.

Buffy comes to school with Cameron, and he tries to grope her. She hits his head against the steering wheel and breaks his nose. Snyder happens to see this; he and Cameron blame Buffy for the altercation. Cameron tells Coach Marin, the coach of the swim team, and Snyder that Buffy was leading him on. The coach, after telling Nurse Greenliegh "take care of my boy," turns to Buffy and tells her she shouldn't dress so provocatively.

Later, Buffy rants to Giles and her friends about the incident with Cameron. Giles informs her that they found Dodd's remains on the beach. Cameron hits the sauna and hears some weird noises, but it's just Coach Marin telling him to hit the showers. While everyone studies in the library, Xander goes out for a drink. Heading for the vending machine, he bumps into Cameron. Xander teases him for getting beaten by Buffy after he tried to paw her. Cameron heads off to the cafeteria for a snack, while Xander tries to decide between grape and orange soda. Cameron screams, and Xander rushes into the cafeteria. He finds the place in shambles, with Cameron's skin on the ground. Xander turns around and finds himself face-to-face with the creature responsible: a Gill Monster.

In the library, Cordelia sketches the creature that Xander saw before running off "like a woman." Buffy and Willow return, having been informed that Cameron and Dodd were the two best swimmers on the team; Gage being the third best. Buffy is assigned to shadowing Gage — suspecting that he will be attacked next — while Willow interrogates Jonathan under a lamp. According to Jonathan, he indeed wanted revenge, but he achieved it by peeing in the pool before practice one morning. Xander overhears Marin and Snyder chatting. They need another swimmer, or they won't be eligible for competition; they don't even care if the guy can swim a stroke, as long as he shows up for practice. The next day, Gage grows suspicious of Buffy when she follows him around.

At the Bronze that night, Buffy is confronted by Gage; she attempts to cover it up but fails. She tells him that his life is in danger, but he doesn't believe her and calls her a "psycho bitch" and a "head tripper." He leaves, only to encounter Angel in the parking lot. They complain briefly about Buffy, then Angel turns into his vamp face and bites him, intending to sire Gage and recruit him for his war against Buffy. However, Angel quickly stops and spits the blood out. Buffy comes to Gage's rescue and Gage lets Buffy walk him home.

The following day, Buffy sits in on swim practice along with Cordelia and Willow. The three girls wonder what could be killing off the swimmers, and Buffy suspects Gage had steroids in his blood. Cordelia comments on a cute new addition to the team, soon realizing that it's Xander. He walks over and informs them that he just made the team. Willow tells Buffy that Jonathan wasn't responsible for the swimmers' deaths. At the beginning of swim practice, Gage stops in mid-lap to wave and smile at Buffy. Cordelia is delighted that she's dating a member of the Sunnydale swim team, while Buffy and Willow tease him for being almost naked. Later, as the team soaks in the sauna. Xander continues to babble, but no one pays attention. Claws come up through a grate, out of the sight of the team.

While Buffy waits for Gage to exit the boys' locker room, she hears him yell. She charges in and finds him with a Gill Monster. Gage suddenly cries out in pain and falls to the ground: he rips open his shirt, and Buffy watches in horror as he becomes a Gill Monster himself. As Buffy fights the two monsters off, one grabs her from behind and bites her in the arm. Suddenly, Coach Marin saves Buffy just by bursting into the room; although Marin is alone and unarmed, the Gill Monsters flee. Buffy is sent to Nurse Greenliegh's office. Marin is told that members of his team are becoming Gill Monsters. Buffy and Giles go hunting for Gill Monsters in the sewers, but they fail to find any. Meanwhile, Xander again hits the sauna, asking where and how he can get some steroids. His fellow swimmers tell him that he's already getting some, right here and now; it turns out the steroids are in the steam from the sauna.

Nurse Greenliegh tries to end Marin's experiments, as he's been attempting to improve his team's performance with the steroids. To keep her from exposing him, he forces her through a grate into the sewers; there, the Gill Monsters devour her. Xander warns everyone that he's had three exposures to the steam, and is in danger of becoming a Gill Monster himself. Buffy has Giles lock up the rest of the swim team, while she goes to talk with Coach Marin. She confronts him and demands information about the steroids he's been giving them, telling him he'll go to jail. Instead, the coach pulls a gun on Buffy and forces her into the same hole where Nurse Greenliegh was killed. The coach explains to Buffy that, while his monsters have already had their dinner, she's there because "boys have other needs."

Xander enters the locker room to check and see if he's becoming "scaly." A new Gill Monster emerges from the locker room and jumps in the pool. Cordelia, thinking it's Xander, laments about his fate. Xander suddenly reappears beside her, right before the monster of Sean attacks Cordelia. They flee back to the library.

Xander decides that, since Buffy hasn't returned, he should go after her. He meets up with Coach Marin and fights him for the gun. Xander disarms Marin and knocks him out. Xander looks down into the hole and sees Buffy, up to her waist in sewer water, surrounded by Gill Monsters who are about to attack her, so he pulls her out before they can do so. Coach Marin wakes up and bashes Xander's head with a pipe wrench, incapacitating him. Marin tries to do the same with Buffy, but she ducks and trips him; she tries to catch him before he falls into the hole, but misses. Being no match for the Gill Monsters in their element, Buffy can only observe as they approach Marin. Xander recovers just in time to join her in witnessing the coach's demise.

The next day, everyone recaps; Xander and the surviving swim team members are given treatments created by the hospital's toxicology lab that will stop the steroids. Meanwhile, the Gill Monsters swim out into the ocean. 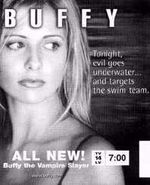