"Gingerbread" is the eleventh episode of the third season of Buffy the Vampire Slayer television show and is the forty-fifth episode in the series. Written by Jane Espenson with Thania St. John and directed by James Whitmore Jr., it originally broadcast on January 12, 1999 by The WB network.

THE SUNNYDALE WITCH HUNT — Picking the worst possible night for a surprise "mother-daughter bonding" visit with Buffy, Joyce is haunted by the discovery of two murdered children and feels compelled to take drastic action. When Giles suggests that the killings appear to be an occult sacrifice, Joyce rallies the entire adult population of Sunnydale behind a Salem-like witch hunt, leading the murderous mob directly to Willow and Buffy.[1]

While on the nightly patrol, Buffy not only encounters a vampire, but also her mother, who is looking for some quality time and a chance to "share" in the slaying experience. As Buffy kills the vampire, Joyce discovers the bodies of two children in the park. The police arrive and, after some questioning, Buffy and Joyce are free to leave. Joyce is visibly disturbed.

At school the next day, Buffy confronts Giles about the situation, desperate to find out what kind of creature would do this. She draws the symbol that was found on the hands of the two children. He says it's probably related to the occult. Buffy can't quite get herself to believe "someone with a soul" could've done this and becomes all the more eager to find those responsible. Willow and Amy sit with Xander and Oz (who exchange a few awkward words) at lunch. Buffy joins them and fills them in on the murders. Joyce shows up at school and informs Buffy that she has spread the word about the murders to other residents and that there will be a vigil at City Hall that night.

Many concerned parents attend the vigil, including Willow's mother and the Mayor. The Mayor says a few words to the crowd before handing the mic over to Mrs. Summers. She gives a speech about how the citizens of Sunnydale need to take back their city from the monsters.

Later, Michael, Amy, and Willow perform a spell in a circle that surrounds the symbol Buffy found on the children's hands.

Michael is shoved up against his locker the next day by another student, Roy, who threatens both him and Amy. Buffy makes a brief appearance next to Amy and gives Roy a seemingly innocent smile; he notices her and thinks better of going any further. Cordelia, having witnessed the whole incident, remarks to Buffy about the outcome of getting involved with losers, believing herself to be the prime example. Buffy goes to find Willow, who has a book Giles needs for researching the symbol.

However, when she finds the book, Buffy also finds the symbol in one of Willow's notebooks. Before Willow can explain, a search of all the school lockers begins in order to find any material that may be witch-related. Students found with anything questionable are sent to the principal's office. Willow tells Buffy that the symbol is harmless and that she was not doing anything wrong, just making a protection spell for Buffy's upcoming birthday. Amy and Willow, who have suspicious materials in their lockers, are taken to Principal Snyder's office. All of Giles' books are confiscated by the police, leaving the Slayer and Watcher without their resources.

Buffy goes home where she finds that her mom, the new founder of MOO (Mothers Opposed to the Occult) does not want Buffy to see Willow anymore. Buffy also discovers that her mom was the one to organize the locker raid. The two argue, and Buffy leaves to patrol, insulted by her mother, who claims her Slaying is not doing Sunnydale any good. The ghosts of the two children appear to Joyce and tell her she has to hurt the "bad girls."

Willow goes home, where her mother calmly tells her she's grounded. Willow flips out, unable to control her anger towards the fact that her mother does not believe that she's a witch.

Buffy meets up with Angel at the park and they talk. He convinces her to keep fighting. He also unintentionally gives her the idea that they do not know anything about the two kids; although pictures of the living children have been provided, there has been no reference to their parents or even any names provided. Buffy heads back to the library to find Giles yelling at a computer, and that Xander and Oz were unable to retrieve any books from City Hall.

After linking up with Willow's laptop over the net, the Scooby Gang find out that the two children died hundreds of years ago. Every fifty years, a demon posed as the children appears in a town to convince residents to kill "bad girls," or witches. Hans and Gretta are an example of fairy tales coming true; in real life, the children inspired the tale of Hansel and Gretel.

Buffy and Giles arrive at the Summers' home to try to talk some sense into Joyce. However, MOO tricks the duo, as Giles is hit in the head and Buffy is smothered with chloroform. They are subsequently knocked unconscious. Amy, Willow, and Buffy are taken by force to City Hall, where they are tied to wooden posts atop piles of books for a combined book/witch-burning. As Buffy regains consciousness, her mother lights the books on fire, sentencing the three girls to death, burning them alive. Amy, however, avoids her fate by casting her famous "rat" spell and scurrying out of the building. Cordelia finds Giles unconscious at the Summers' home and wakes him in time for them to head off and save the others. Xander and Oz find Willow's room in shambles, prompting them to also head to City Hall.

In the car, Giles practices a German incantation while Cordelia prepares a concoction to force the demon to show its true form. Oz and Xander climb through the air vents in the hope of saving their friends. Giles and Cordelia break into the room, which is now partially on fire with the parents watching. Cordelia uses a fire hose to put out the fire while Giles casts the revealing spell at the children. As the demon, now in its true, ugly form, goes for Buffy, she breaks the stake she was tied to and stabs the creature. Everyone is safe, and the demon is dead.

The next day, none of the parents remember much of anything, and everything is back to normal. Unfortunately, Amy is still a rat. Buffy and Willow try performing the reversal spell to restore her to human form, but it doesn't work. Buffy suggests getting Amy "one of those wheel thingies."

Amy: "Oh, God, and Mr. Nyman that thing he does with his face..."
Willow: "The thing with the face! When he makes a point, the— I always think he's going to sneeze!"
Amy: "I thought I was the only one who saw it." 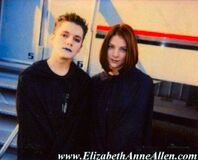