"Forever" is the seventeenth episode of the fifth season of Buffy the Vampire Slayer and the ninety-fifth episode in the series. Written and directed by Marti Noxon, it was originally broadcast on April 7, 2001 on The WB network.

ANGEL COMES BACK TO BUFFY — A grieving and confused Buffy falls into the loving arms of Angel who comes back to Sunnydale after he gets word about the death of her mother. Meanwhile, a distraught Dawn takes it upon herself to perform a magic spell to bring her mom back to life.[1]

In a funeral home, Buffy picks out a casket for her recently deceased mother. Dawn is concerned whether Joyce would be satisfied with the chosen casket, since she's the one who'll be in it forever. Later, the Scooby Gang gather for dinner at the Summers' house to discuss funeral plans. Buffy mentions that ever since her mother's demise, their father has not yet come in contact with them. Dawn feels left out when she discovers that before her mother went into surgery, she and Buffy spoke about funeral choices just in case.

As Willow and Xander leave Buffy's house, they run into Spike, who's trying to deliver a bouquet of flowers. Xander accuses Spike of trying to take advantage of the situation to get closer to Buffy, while Spike argues that he was actually trying to pay his respects to Joyce, as she was the only one among them that ever treated him with decency. When it becomes clear that Xander won't be convinced otherwise, Spike throws the bouquet down and storms off. While Xander continues to berate him, Willow notices Spike didn't even leave a card with the flowers. Later that night, the remaining Summers women sit in their room, trying to cope with and contemplate the situation.

Joyce is buried the next day. After the funeral, Dawn leaves with Willow and Tara to their dorm, finding it hard to return to her own home. Buffy, though, stays at the cemetery, until nighttime comes. Angel arrives at that time and apologizes for not being able to come sooner. Both rest under a tree, while Buffy expresses her regrets that she wasn't more useful, and her worries that she doesn't know what to do now she can't focus on the funeral. Angel tries to reassure her, telling her that she isn't to blame for what happened and that, even though she doesn't feel like it now, she is a strong person and will work out how to continue from this point. After admitting that it's not such a good idea for Angel to stay longer, since she might end up taking comfort in him, Buffy kisses him. The kiss quickly got out of hand and they soon break apart. Buffy points out that she was right and that it would be better if he leaves. Angel apologizes for this, though Buffy assures him that she is grateful that he came, and he remains with her for the last few minutes before sunrise.

Meanwhile, Willow and Tara try unsuccessfully to cheer up the dreary Dawn, or at least get her mind off things, but they recoil in shock when Dawn expresses her wish to perform a resurrection spell for her mother. The two witches refuse to help her, explaining that it is wrong to use witchcraft to meddle in the matters of life and death. In Xander's apartment, Anya talks with him post-coitus about her ability to create life; when she thinks about it that way, it makes sex a little more meaningful and death a little less sad. In the meantime, Giles lingers in his apartment, drinking and listening to a record he once listened with Joyce.

Outside Sunnydale Memorial, Ben is approached by Jinx. Ben swears that he will not help Glory and he is tired of her games, but accidentally makes a comment that leads Jinx to conclude that the Key is human. Not wanting Glory to learn this fact, Ben stabs the minion with his own knife. However, Jinx survives and manages to make it to Glory's mansion and inform her as such, much to Glory's happiness as it narrows her search down greatly.

The next day, Willow and Tara leave for class, but not before Willow magically pulls out the book Bynum's History of Witchcraft for Dawn. When she inspects it, she finds it contains a section about resurrection spells. She goes to the Magic Box to gather some ingredients and sneaks up into a restricted area to steal a few books and potions. That night, she collects dirt from her mother's grave, but Spike catches her in the act. He knows what Dawn is doing and offers to help. Though Dawn initially regards it as an attempt to get in good with Buffy, Spike makes it very clear that Buffy is not to know of his involvement, and he is helping her because he doesn't like seeing the Summers women "take it so hard on the chin."

Spike takes Dawn to visit a magic expert named Doc. After giving her the rest of the information needed to complete the spell, he informs her that to break the enchantment all she needs to do is rip the picture of Joyce. The two then leave to collect the final ingredient for the spell — a Ghora demon egg. Confronting the demon, Spike distracts it while Dawn successfully steals one of its eggs; in the process, he is injured by the Ghora demon, though he kills it in turn. Dawn returns home to perform the spell alone.

Concurrently, in their dorm room, Willow tells Tara that she wants to start a journal, ever since Joyce's death, after receiving the sudden epiphany that life is short. Tara then realizes that a witchcraft book is missing, and Dawn might have taken it. Realizing what Dawn is about to do, they then call Buffy to alert her.

Buffy finds Dawn, just as she finishes the spell, and the two begin arguing. Dawn believes that Buffy doesn't even care about their mother's death, as she is just running around as if the whole thing is a chore. Dawn states that Buffy hasn't even cried and kept pushing Dawn away, inadvertently or not. After accusing Buffy of just cleaning up Joyce's "mess," Buffy slaps her, then starts to break down. As tears roll, and footsteps approach the Summers home, Buffy explains that she's just been keeping herself busy so that she does not have to deal with the situation; she runs around and works because if she stops, then Joyce is really gone.

Suddenly, a shadowy figure passes the window, and the girls hear a knock on the door. Buffy hopefully heads towards the door. Dawn realizes that some things just aren't meant to be, and, just before Buffy whips the door open, she rips apart the picture of her mom. At that moment, opening the door to nothing, Buffy breaks down, finally facing the reality of her mother's death. Buffy falls into Dawn's arms, and both sisters break down crying, united in their grief. 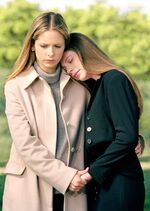 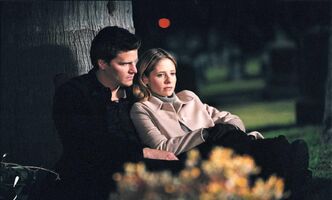 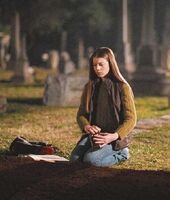 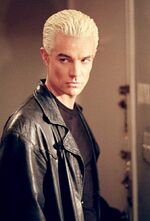