After her latest rampage through Sunnydale, Faith arrives in Los Angeles, where Wolfram & Hart strikes up a deal with her: if she assassinates Angel for them, they will get her off the hook of all criminal charges against her in Sunnydale. Though Faith agrees, it becomes clear to Angel that she has plans of her own.

Angel and Wesley rescue a gang member named Marquez from three demons. Elsewhere, Faith, last seen in "Who Are You," arrives in Los Angeles on a bus. She mugs the first man she meets.

In a flashback to Romania in 1898, Darla leads a blindfolded Angelus to his birthday present: a young Gypsy woman lying bound and gagged on the parlor floor. As Darla watches, Angelus vamps and bites the terrified girl high on the inner thigh.

At Angel Investigations, Angel tries to convince Marquez to testify in court, despite the gang member's resistance. In the other room, Cordelia complains to Wesley, the latter of whom is trying to sleep. She says that Marquez's chance of testifying is low, and therefore she "wasted a good vision". Wesley, however, believes that Marquez will do the right thing.

Faith, dancing at a local nightclub, is confronted by a girl who objects to Faith dancing with her boyfriend. In response, Faith nonchalantly elbows her in the face. The boyfriend takes a swing at Faith, who slams him into a group of people across the room, sparking an instant melee. Faith continues to dance while chaos rages around her, choreographing kicks and punches without missing a beat.

In court the next day, Lindsey McDonald, on behalf of Wolfram & Hart, moves for dismissal of a murder charge, but Angel shows up in the nick of time with Marquez, who is a key witness for the prosecution and is now willing to testify. As Lindsey takes heat for his failure in court, Lee Mercer suggests hiring Faith to kill Angel. Together with Lilah Morgan, who knows how to find Faith, he makes the contact.

As Wesley and Angel return from court, Cordelia is on the phone, making plans to meet a potential client for lunch the next day. She asks how the case went, and Wesley announces that the prosecution won, thanks to Marquez's testimony. However, Wesley also predicts that Wolfram & Hart will enact revenge upon Angel Investigations as a result.

Outside of a nightclub, Faith and Lilah meet. Immediately suspicious of how Lilah knows so much about her, Faith threatens her, just as a limousine pulls up behind the two. Lee invites Faith in, and, throwing a frightened Lilah a glare, she accepts the offer and gets in.

In another flashback to 1898 Romania, Darla finds that Angelus is acting strangely. He is reflecting on his 140 years of killing, which he remembers in detail. He says that the Gypsies "did something" to him. Darla realizes that he now has a soul, which she finds filthy and disgusting. She breaks a chair, threatens Angelus -- now Angel -- with a broken chair leg, and drives him out into the night.

At Wolfram & Hart, Faith negotiates with Lilah, Lindsey, and Lee. They remind Faith that she is charged with murder, and promise to get her charges dismissed if she will kill Angel. She accepts immediately, likely out of desire for revenge on both Angel and Buffy, knowing what the death of Angel would do to her. She asks what they will pay. Lee skirts around the issue, telling Faith that his ass is on the line. Dissatisfied with his answer, she grabs him by the scruff of the neck and brutally beats his face against the table. Lindsey and Lilah simply watch their colleague being assaulted, impressed with her initiative.

The next day, Cordelia, Wesley, and Angel are in the lobby of an office building on their way to a lunchtime meeting. Faith suddenly appears and attempts to shoot Angel in the back with a crossbow, but Angel turns around in time to catches the bolt in mid-air a few inches from his heart. Faith issues her challenge and runs for the door.

Back at his office, Angel phones Giles in Sunnydale to learn that Faith has been out of her coma for a week. He instructs Wesley and Cordelia to help him track the rogue Slayer down and then make themselves scarce. Cordelia agrees, but Wesley wants to be involved. Wesley asks if Faith did something to Buffy, thinking this might explain Angel's feelings. However, Giles wouldn't go into specific details, only telling Angel it was "rough". Fearing that Angel will let emotion control him and one of the two will end up dead, Wesley states, "She's not a demon, Angel. She's a sick, sick girl," expressing concern that it's possible Faith can be rehabilitated. Angel angrily replies that he had been helping her the previous year, and was about to reach her, when Wesley burst in with commandos from the Watchers Council to abduct her, ensuring that she would never trust anyone again. Wesley is clearly not proud of that moment.

Later, with Wesley and Cordelia absent, Angel finds Faith in his office, where she stands protected from immediate attack by sunlight streaming through open blinds. Faith promises to kill Angel when the time comes, then tosses him a gun, to give him a chance to kill her first. He fires at her leg without hesitation. The round he fires turns out to be a blank, so he tosses the gun back to Faith. Faith mocks him for not shooting to kill. She wants to up the stakes by playing for Angel's soul as well as his life. She then shoots him in the shoulder with a real bullet and escapes by crashing through the sunny window.

Angel, wearing a suit and spouting convincing corporate-speak, sneaks into Lindsey's plush Wolfram & Hart office. While he is searching in Lindsey's desk drawers, Lindsey enters. He denies knowing anything about Faith. He also informs Angel that Wolfram & Hart has advanced security systems both electronic and mystical, so that no vampire can enter the building undetected. A security guard appears from the wings, but Angel disables him. Lindsey says more are on the way, and the entire encounter is being recorded on hi-def video. Angel leaves, promising to see Lindsey again "real soon."

Wesley and Cordelia, planning to go away as Angel instructed them, go to her apartment to pack. Phantom Dennis tries to prevent Cordelia from opening the door. She thinks Dennis is jealous of Wesley until they discover that Faith has broken in. Faith has correctly calculated that Angel, indifferent to being targeted himself, will be unable to ignore threats to his friends. Despite Wesley's attempt to offer her help, Faith attacks and subdues both of them.

In another flashback to 1898 Romania, a newly-ensouled and distressed Angel begs for help on the streets of Borşa. He encounters a group of well-dressed people but rejects the coin they toss into the mud, telling the men that he wants the one woman in their company. Outraged, the men rush Angel and force him into a dark alley as he shouts, "I'm a monster!" Angel tosses one of the men back out to the street and leaves the other, either unconscious or dead, lying the alley. Angel staggers out, drags the woman into the alley and bites her neck.

Angel arrives at Cordelia's apartment, and she tearfully explains what happened. When Cordelia asks about Wesley, Angel tells her that he's gone, and unbeknownst to them, he is an apartment with Faith. There, he is gagged and tied to a chair, battered. Finding Wesley still unwilling to give up information, Faith recites the list of the "five basic torture groups": blunt, sharp, hot, cold and loud, and gives Wesley a choice. He starts to give an emotional speech, but ends up calling her a "piece of shit". Before he can finish, Faith, outraged, decides on her own to move from blunt to sharp. She breaks the glass in a picture frame and picks up a large shard.

Meanwhile, Angel and Cordelia map recent assaults, hoping to learn where Faith might be. Angel wants to know the address of Faith's first victim. He suspects that Faith might be staying in that apartment.

Faith sits disconsolately in an open window, waiting for Angel. Sighing, she drops the now-bloody glass shard to smash on the pavement below. Turning back into the room, she finds a lighter and a can of cooking spray in the kitchen. While taunting Wesley, she shows him how she can make a burst of flame. She removes Wesley's gag because she wants to hear him scream. Angel smashes down the door and charges into the apartment. Faith drops her impromptu torch and holds a knife at Wesley's throat

The earlier flashback continues. Angel mutters, "I can't, oh God, I can't." As he stumbles away down the muddy street, the girl he attacked appears in the entrance to the alley, disheveled and bitten, but alive.

Almost forgotten, Wesley sits perfectly still under Faith's knife as vampire and Slayer face each other. In a brief exchange of verbal thrusts, one of Angel's jabs makes Faith drop her guard for a split second, and Wesley flings himself and his chair backward out of her grasp. Angel knocks Faith down with a tremendous kick and a long fight begins. Faith seems to have the upper hand as Angel misses many opportunities to attack. During the fight, Faith taunts Angel but he remains silent.

Eventually, they crash out a window together, land on a dumpster, and continue their fight in the alley three stories below. As Wesley frees himself, rain falls. Faith swings at Angel repeatedly, but lands few blows. She repeatedly says, "I'm bad, I'm evil." Finally breaking his long silence, Angel tells her, "Nice try, Faith. I know what you want, and I won't do it. I won't make it easy for you." Faith continues to hit Angel, but her blows decrease in strength. As Wesley appears, armed with a knife, Faith suffers an emotional meltdown as she begs Angel to kill her. Angel cradles Faith in his arms as she sobs. Standing unheeded behind them, Wesley, surprised at the sight of Faith's humanity, drops his knife and silently looks on. 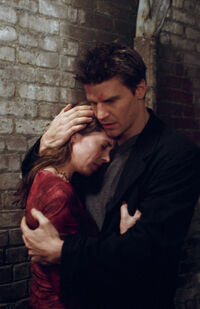 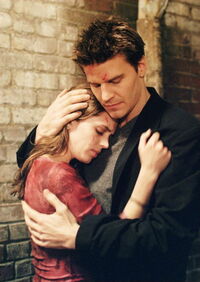 Retrieved from "https://buffy.fandom.com/wiki/Five_by_Five?oldid=197393"
Community content is available under CC-BY-SA unless otherwise noted.