"Fear, Itself" is the fourth episode of the fourth season of Buffy the Vampire Slayer television show, and is the sixtieth episode in the series. Written by David Fury and directed by Tucker Gates, it originally broadcast on October 26, 1999 on The WB network.

HOUSE OF HORRORS — Buffy reluctantly agrees to join Willow, Oz and Xander at a Halloween party where they stumble into a real-life house of horrors masquerading as an innocuous fraternity. Meanwhile, Giles is called upon to help out the college crowd when all he wants is to get into the spirit of the holiday.[1]

While carving jack o'lanterns in Xander's basement, the gang discusses their plans for Halloween, while Buffy continues to mope over her situation with Parker. They decide to go to the Alpha Delta house for a Halloween party. Buffy leaves early; on her way home, a kid wearing a demon mask jumps out at her, and she hits him without thinking. He asks her what is bugging her and then takes off, not getting to hear Buffy's reply: "That's what I'd like to know."

The next day at school, Buffy and Oz both express their concerns for Willow about her magic. Buffy spots Parker, and immediately runs away because she doesn't want to face him. Willow follows, and tells her to get over it and have fun at the party that night; however, Buffy thinks that Giles will want her to do some patrolling. Much to Buffy's surprise, however, when she goes to visit Giles, he's wearing a sombrero and is in an incredibly cheerful Halloween mood. Reminding her that demons are generally quiescent on Halloween, he encourages her to go to the party and have fun.

At the fraternity house, the boys are getting ready for the party. One of them gives another an old book that he found a symbol in to paint on the floor. Anya goes to see Xander, and again wants to know where their relationship is heading. He agrees that they're somewhat dating and invites her to the Halloween party that night, telling her to dress in something scary. Buffy visits Professor Walsh and asks for her missed assignments, but is met with less than kind reception from the strict teacher. Riley, however, gives her the assignment, but when she says she'll get them done that night he tells her that since it's Halloween she should go out and have fun instead. He tells her that Halloween is the night when all the monsters come out and she replies that's a misnomer.

Oz and Xander carry the equipment for a sound system to the fraternity house and Oz installs it while the guy who got the book earlier paints the symbol on the ground. Xander asks what the symbol represents and the guy says he doesn't know, it's just supposed to be scary. Oz, listening to the speakers says the left one is crackling. He goes to strip the wire a little bit and cuts his hand. While he walks by to go out and clean it, some of his blood spills onto the symbol making it pulse and waver ominously. A fake spider laying in the circle suddenly turns into a very real tarantula.

Joyce alters one of Buffy's old Halloween costumes, Little Red Riding Hood. They talk about how things used to be with her dad around and her mom's current social life. When Joyce talks about how Hank used to love going trick or treating with her, Buffy makes the comment that he's not interested in her anymore. Joyce tells her that their divorce really did have nothing to do with Buffy. Buffy acknowledges that she knows that's true and that she just wished he still took an interest in her now.

At the party, a guy leads a blindfolded girl to stick her hand into a bowl of grapes and tells her the grapes inside are eyeballs. When she takes the blindfold off, they really are eyeballs. She screams and pandemonium takes control over everyone around them.

Buffy waits outside the party for her friends, and Xander shows up asking what she's got in her basket. She replies: "weapons." Buffy comments on his nice tux and Xander says he's dressed as James Bond. He wants to make sure that if they change into their costumes again, he'll at least be cool. Buffy points our that if that happens he'd probably just turn into cool head waiter guy instead. He says as long as he's cool and has some kind of power he'll be happy. Willow and Oz show up. Willow, who's dressed as Joan of Arc, states that they have a lot in common since she was almost burned at the stake and had a close relationship with God. When Xander asks who Oz he pulls his shirt aside to show his sticker name tag that says "Hello, My Name Is" with the word "GOD" written under it. Xander laments that he could've done the same thing and wished he's known that before he rented the tux.

They start walking towards the fraternity house only for a couple of masked soldiers in camouflage holding guns (the same ones seen in the shadows around campus before) silently come out of the bushes and move past them. Buffy tells them sarcastically that their costumes are nice and very stealthy. Willow asks who they're supposed to be and Xander suggests NATO. Xander tells them all that he invited Anya but she's having a hard time finding a costume. Buffy makes a comment about being the only one without a date.

Everything at the party goes crazy as people run in all directions screaming, some ending up mutilated and injured in various ways. The lights are flashing with a strobe light making everything even more chaotic. There is a girl lying bleeding on the sofa who opens her eyes and looks around. Several people try to escape only for the door to slam before they can get out. One of the frat guys comes running down the stairs screaming for help and trips, landing at the bottom of the stairs with a broken neck. A deep voice demands to be released.

The gang make their way to the front door, the house extremely peaceful from the outside. Once they're inside they wonder where everyone is. Oz tells them to follow the arrows. Willow gets caught in some cobwebs and wigs out. Xander is standing in the hallway when a skeleton with a knife pops out. They're all pretty standard Halloween obstacles until Oz turns around and sees a tarantula on Willow's shoulder. He goes over and knocks it off quickly, but Willow is still creeped out. Buffy tells them they should just get to the party part of the party. While walking down the next hallway he gets confused because it's not leading to where it should. Buffy finds real blood on the carpet to which Xander replies the frat boys have gone overboard. Buffy shushes him because she hears a squeaking and when they look up, dozens of real bats attack them. However, as soon as they stop Oz finds one of them and they're only rubber. They all wonder what's going on when the same deep voice from before demands to be released.

Anya arrives at the party, dressed as a big pink and white bunny, but she is unable to get in as the front door has disappeared. As she walks around to the front, she sees a girl screaming at a window, and the window bricks over on its own. Inside, and unable to get out of the house, Buffy tells the gang to find a way out and to get help. They find Chaz, one of the fraternity members, in a closet saying that "it's alive." A skeleton attacks Buffy from behind with a knife, but she destroys it and it becomes fake again. Chaz goes back to the closet and when they turn to look the closet is now gone. Anya goes to Giles for help saying they need to save Xander. Giles asks about the others and she says they're trapped too but they need to save Xander.

Xander tries to talk to Buffy and the gang, but he finds that he's invisible to them all as they completely ignore him. Buffy and Willow fight over Buffy giving orders and then over whether Willow can safely do a guidance spell to lead the way. Willow and Oz, who go off on their own to find a way out, find a set of stairs, and head up. As they're walking, Oz starts to change into a werewolf and scratches Willow before running away from her. Xander approaches a mirror, and along with his reflection, a once-fake head on the table behind him says that he can see him too. Oz sits in a bathtub, chanting over and over that he isn't going to change. Willow conjures her spell to Aradia, the goddess of the lost. The spell, however, gets out of control and she screams for help as it attacks her. Buffy, hearing Willow's cries, tries to get to her, but instead falls into the basement where the dead start coming up from the ground and grabbing at her. The frat guy who tripped and broke his neck tells Buffy that she will keep fighting but always end up in the same place.

Meanwhile, Giles and Anya are unable to find a way in, so Giles pulls out a chain saw and cuts a door into the house. In their frenzied attempts to escape their fears that have somehow come true, all the gang runs into the Goat room, which is where the actual party was, and things seem back to normal. From the book the frat boy used, they determine that the sign on the floor is the Mark of Gachnar. Giles and Anya then break into the room with the chainsaw saying the walls closed up behind them. Buffy destroys the symbol before Giles can tell her that destroying the symbol will bring Gachnar forth. But as the demon has manifested itself, it turns out he is mere inches in height. After a laugh, Buffy simply squashes him with her shoe. At Giles' place, Xander questions Anya's bunny costume while they eat candy. After a minute Giles discovers his mistake. The small picture of Gachnar in the book had a Gaelic inscription reading: "Actual size."

Willow: "Oz!"
Xander: "Will!" (she appears, moving down the hall.) "We've got trouble. There's something terribly wrong with Buffy. She can't even tell that I'm—"
Willow: "Oz!" (Willow can't see Xander either, so he stops. Willow looks around.) "Oh, God… Okay, guiding spell. Okay. Yeah. I can do it." (She takes off. Xander turns back and knocks a pumpkin off a table in frustration.) 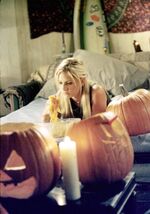 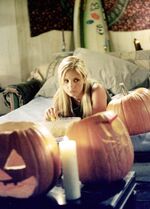 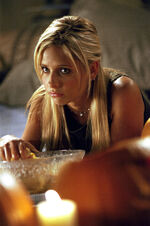 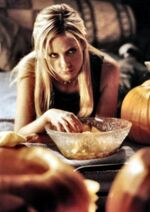 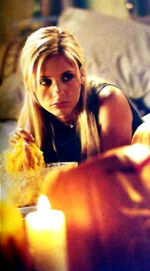 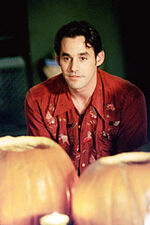 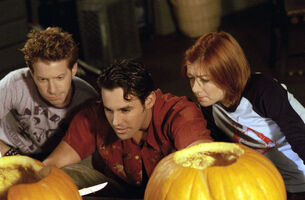 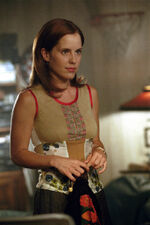 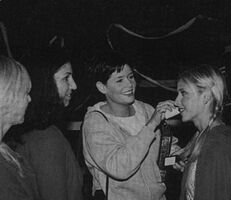 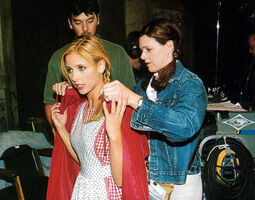 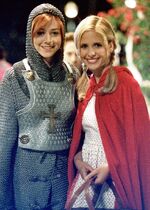 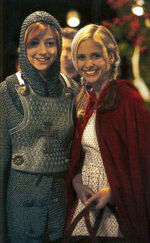 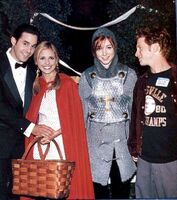 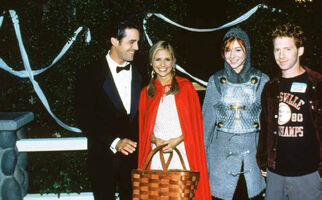