"Faith, Hope & Trick" is the third episode of the third season of Buffy the Vampire Slayer and the thirty-seventh episode in the series. Written by David Greenwalt and directed by James A. Contner, it originally broadcast on October 13, 1998 on The WB network.

NEW KIDS IN TOWN — Just as Buffy tries to return to her normal life of going to school, hanging out with friends and saving the world, she is faced with the arrival of an ancient, cloven-hoofed villain and his blood-sucking sidekick, Mr. Trick. Another new Sunnydale arrival, Faith, helps Buffy in her battle against the unspeakable demons and ingratiates herself into every aspect of Buffy's life.[1]

Willow is babbling to Oz about how they are seniors and are now allowed to go off school campus for lunch. Still, it takes Xander, Cordelia, and Oz to get her to walk to the grassy area where Buffy has set up a picnic basket (since she is still expelled and forbidden from entering the grounds). They proceed to chat about Martha Stewart, Scott Hope, and the meeting that Buffy will attend with Principal Snyder later on.

That night, we are introduced to Kakistos and his right-hand man, Mr. Trick, as they drive up to the Happy Burger drive-through. Trick remarks on Sunnydale finding it quaint. He also makes note of the town's remarkable whiteness quipping "I mean, admittedly, it's not a haven for the brothers, you know, strictly the Caucasian persuasion here in the Dale." Trick grows hungry as Kakistos describes, in gory detail, his plans for the slayer. Trick then pulls the drive-through attendant through the window, into the car, and begins to feed on him.

Meanwhile, Buffy has yet another dream involving Angel, this time at the Bronze. As they dance in front of their friends, Buffy's Claddagh ring falls off her finger. When Angel picks it up the dream becomes a flashback of Buffy killing him. He clenches the ring in his fingers until blood runs between his fingers, and blood also starts to stain his white shirt, exactly where Buffy had to impale him. He tells her to go to hell, and his appearance changes to that of a zombie. Buffy wakes up, and Joyce is asking her if she's ready to face the Principal.

Principal Snyder informs Buffy (through gritted teeth) that she's readmitted into Sunnydale High School. Although not happy about it he's been overruled by the school board as, since Buffy is no longer suspected of murder, she is entitled to public education. He lays out some conditions, but it seems they're not actually requirements for readmission, simply Snyder's cruelty toward an unwanted pupil. He tells her she has to take make-up tests, see the school psychologist and get a glowing letter of recommendation from a member of the faculty (other than Giles). But Buffy and Joyce both know that Snyder has been overruled, and while is happy enough to point out his position probably feels meaningless now, Joyce takes a more childish approach to express her delight.

Buffy and Willow go to the library, where Giles has asked them to meet him for help on research. He wants to perform a binding spell on Acathla to make sure that the demon cannot be resurrected again, and asks for as many details as possible about how she defeated him. Buffy answers his questions, but leaves out the fact Angel's soul had been returned before she sent him to hell. Buffy rushes out in order to take her English make-up exam. Willow tries to persuade Giles that she could help with the magic spell.

At the Bronze, Willow and Oz are kissing when Buffy comes up with drinks. She reveals that she passed her English make-up, and is glad to be back in her own life. Just then, Buffy is approached by Scott. When asked to dance, however, she babbles through a few excuses and a thank you. Scott interrupts, and tells her where he will be if she changes her mind and wants to dance later.

Cordelia and Xander approach, calling the gang's attention to two of the people on the dance floor, one of which is dressed and acting like he is from a much earlier decade and dancing with a young woman. Buffy speculates that he might be a vampire, and follows them out, though she is distracted for a few moments by Scott. The gang follows her out as well, and right when they are ready to turn back they hear signs of a struggle and head towards them. However, when they get there, they find that the girl is more than capable of taking care of herself, making everyone come to the conclusion she is a slayer. When Buffy arrives, the girl introduces herself as Faith, before staking the vampire and walking away.

Back inside the Bronze, Faith is telling lewd stories about slaying to the gang and how, since her Watcher was called to England, she wanted to take this opportunity to compare notes with Buffy. She apparently thinks that Giles has gone to England, as well. Cordelia figures out that Faith must have been called to duty as a Slayer when Kendra died. Faith wants to hear a story from Buffy, but is quickly distracted when Xander asks for the "alligator story." When Buffy is asked what her toughest kill was, she flashes back to killing Angel, but says that they are all difficult. Oz asks about her stance on werewolves. Faith doesn't have a problem with them.

Giles confirms that a Watchers' retreat is going on in England, but that he wasn't invited. Upon meeting Giles, Faith says that she should have requested a transfer. Buffy invites her to dinner, and then asks Willow for help studying. She is ignored, though, and sits in the library. She leaves later, when Giles begins asking her more questions about the details of Acathla's demise.

Willow and Xander are showing Faith all the places in the school where supernatural things had occurred, when Faith turns to get water. Finished, she accidentally bumps into Scott and the two start talking. Buffy shows up just in time to see the two of them apparently flirting. Willow starts talking about how Faith and Scott might hit it off, and agrees with Faith that Buffy needs to "find the fun." Buffy then drags Faith away.

Elsewhere, Mr. Trick is filling Kakistos in on what they can do in Sunnydale, before informing the vampire that there is already a slayer there, a fact which indicates that they are not after Buffy after all, but Faith instead. Kakistos also draws attention to the scar over his right eye, saying that "she will pay for what she did to me." Mr. Trick agrees, before going to answer the door and dragging the pizza delivery man in for all the vampires to feed on.

Mrs. Summers and Faith are talking at the dinner table, discussing slaying. Mrs. Summers appears to think that Faith might be a better Slayer than Buffy, then leaves to get another drink for Faith. Buffy follows Joyce to talk, revealing that she doesn't want Faith to steal her life, like she seems to be doing. Mrs. Summers says that Faith could share in the slaying though, and that they could even ask Faith to take over. Buffy accidentally tells her mom that new Slayers are only called to duty when the old one dies, which makes her mother freak out, because Buffy never revealed to her that she had been temporarily killed while fighting the Master. They finish talking though, and both feel better.

While Buffy and Faith patrol, Faith starts talking about Angel. The two verbally spar before vampires interrupt. Faith starts beating one into a pulp as two drag Buffy down, mentioning Kakistos as they do so. Paradoxically, Faith appears to enjoy beating the vampires more than slaying them, even to the point of ignoring Buffy's plea for help. When Buffy yells at Faith, the latter merely says that she was doing her job and walks away.

Buffy tries talking to Giles, but he tells Buffy that it's clear she and Faith have different personalities but agrees to get in touch with Faith's Watcher. Giles begins mulling over what might be going on at the retreat before asking Buffy details to trace the slain vampire's lineage. Upon hearing Buffy try saying "Kakistos," he rushes off to the library to grab a book. He finds that Kakistos is one of the most brutal vampires around, and is so old his hands and feet have become cloven. With the fact that both the vampire Kakistos and Faith appeared around the same time, Giles and Buffy begin wondering if the two are connected. They formulate their plans together, then go their separate ways.

On her way out, Buffy runs in to Scott, who again tries to ask her out on a date. Buffy accepts, but then runs away when Scott hands her a Claddagh ring, exactly like the one Angel had given her. Giles comes up, and tells Buffy that Faith's Watcher is dead. Buffy goes to see Faith, and begins talking about Kakistos, surprising Faith with the fact that the vampire is in town. Faith starts packing, but Buffy brings up her Watcher's death, which stops Faith in her tracks and she reveals that it was Kakistos who brutally killed her. They are interrupted by a knock on the door, and Kakistos is outside with the dead motel operator.

Faith and Buffy run, eventually ending up in the exact warehouse where Kakistos has been staying. Faith begins to fall apart, having witnessed the murder of her Watcher, right before bringing attention to the fact that they were herded there. Buffy yells at Faith, repeating the number one rule of slaying: "Don't die!" Buffy fights the rest of the vamps while Kakistos starts beating Faith. Buffy intervenes, and Mr. Trick takes the time to leave with one of the other vamps. Buffy stakes Kakistos, but he's so old that a regular stake isn't enough to kill him. Faith recovers and picks up a thick wooden post that she had broken earlier, using it to impale and thus dust Kakistos.

Back in the library, Giles tells Buffy that the Watchers Council has agreed to allow Faith to remain in Sunnydale and he will act as her Watcher until a new one is sent. Buffy finally reveals to the others that Willow's restoration spell had cured Angel just before she was forced to kill him. She tells them all the details, and Willow and Giles proceed to stare at her. Giles says that it will help with the binding spell, and Willow empathizes with Buffy and apologizes. When Buffy leaves, Willow once again approaches Giles about the spell, only to be told that the spell doesn't exist, and he was merely trying to get Buffy to talk about what had happened.

Buffy finally talks to Scott, and they make plans to go out later on. Buffy goes to the mansion, finally being able to say goodbye. She leaves her Claddagh ring in the spot where she killed Angel and goes out. The ring starts to quiver on the floor, however, and a bright white light appears. Out of the light drops a naked figure — Angel, shivering, back from Hell.

Mr. Trick: "I believe this dance is mine."
Buffy: "The music stopped."
Mr. Trick: "But the beat goes on. Gimme whatcha got." 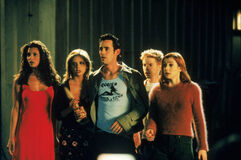 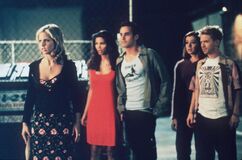 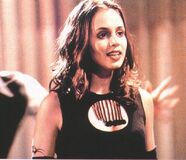 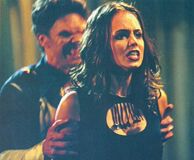 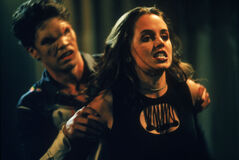 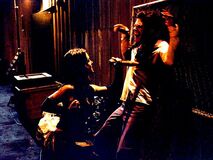 "An unexpected enemy invades Buffy's life, but fate holds an even greater surprise."