They lived underground, along with the Slimefolk, the Ravenclan, and creatures that resembled leaf-blowers. The Slayer Organization helped the four races band together and defeat a horde of demons, led by Yamanh of Hoht, who were coming from deeper underground to attack both them and the surface world.

They apparently laid eggs in others' ear canals, non-fatally, but the fairy who claimed to have done so to the Buffy decoy later denied it, embarrassed.

When Los Angeles was transformed into hell by the Senior Partners, a red fairy tribe was residents with Lorne, the Lord of Silver Lakes.

Following the End of magic, some fairies ventured to the surface; others lived in London at Alasdair Coames' apartment where they were protected, and one such fairy was sent to San Francisco by the spirit of Sineya to send Buffy Summers and Willow Rosenberg a message on how to reverse the end of magic and save the world. 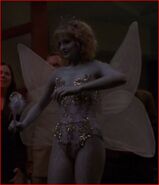 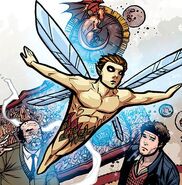