"Entropy" is the eighteenth episode of the sixth season of Buffy the Vampire Slayer television show, and is the 118th episode in the series. Written by Drew Z. Greenberg and directed by James A. Contner, it originally broadcast on April 30, 2002 on UPN.

Still smarting from being jilted at the altar by Xander, Anya seeks advice from Halfrek; Buffy tries to bond with Dawn while avoiding Spike; Andrew, Jonathan and Warren experiment with a talisman; Willow asks Tara out for coffee.[1]

At Sunnydale Cemetery, the Trio chase after some vampires on ATVs, but they crash into each other, giving the vamps a chance to escape. Buffy shows up and attacks the vampires, forcing one to drop a disk it was holding. Warren snatches it and the Trio escapes, unseen by the Slayer. Buffy takes on two of the vampires, but receives some help when Spike shows up. He holds one of the vampires out of the way while he starts up a conversation. He raises the issue of Buffy telling her friends about them, but she denies it, even acting indifferent to his threat of telling them himself.

Xander mopes alone at his apartment, but eventually couldn't stand it anymore and leaves. As he walks away, Anya watches him from behind some bushes.

The next day, in UC Sunnydale, Willow waits for Tara outside of her classroom; the two talk and plan a coffee date. Buffy and Dawn shop together, but have a difficult time as Dawn has a shoplifting record at most of the stores. They chat about all of the things Dawn stole and how they can work to remedy the problem.

Elsewhere, Jonathan works on a project involving the disk they stole as Warren watches over it, eager for the project to be completed. While Jonathan finishes his work alone, Warren and Andrew talk about their inability to trust Jonathan and how it'll be soon before they wouldn't need him anymore.

That evening, Xander comes home from work and finds Anya at his apartment. Xander tries to apologize for walking away from their wedding. He tries explaining his feelings about wanting to stop the wedding before it happened. Taken aback, Anya asks Xander what he meant. Xander tries to change the subject until Anya cuts him off by asking if he still wants to marry her. Xander admits to loving her dearly and wanting to be back with her, but says that he's still too afraid of himself to marry her. With her back turned to Xander, she reveals her vengeance demon face and wishes him physical harm. Frustrated that her attempts to grant her own wish were unsuccessful, she leaves. The next day, Anya has coffee with Halfrek, and the two talk about Anya's attempts at vengeance. Halfrek informs Anya that she couldn't grant her own wishes, and that she has to get someone else to wish Xander harm.

At the Summers house, Buffy makes pancakes for Dawn. Dawn realizes that Buffy's trying too hard to make up for what happened when she was crazy. She proposes the idea of joining Buffy on patrol so the two could spend some time together, but Buffy doesn't allow this.

On their coffee date, Willow fills Tara in on all of the supernatural activities that she has missed over the past months. Anya interrupts them and wants to talk about her pain and how Xander caused it. She also talks to Dawn and Buffy in attempt to get one of them to wish something horrible on Xander, but none of them go along with it. While talking with Buffy, Xander shows up at the house, and Anya leaves in a huff. Buffy talks him out of going after Anya and he takes his aggression out on a lawn gnome. When Buffy doesn't recognize the decoration as something she put there, Xander checks it out and discovers it had a small camera inside.

Buffy goes to Spike in his crypt and presents him the small camera, asking whether he had anything to do with it being on her lawn. He's offended that she would even accuse him of such a thing. Buffy reminds him that it's not like he hadn't done anything like this in the past, but Spike tells her he doesn't want to hurt her since she fell in love with her, which Buffy acknowledges. He then tries to convince her that what existed between them was real. Buffy knew it was, but only for him. She tries to convince Spike to forget about everything that happened between them and opines that he should move on, but he interrupts Buffy telling her to get out.

At the Magic Box, Anya and Halfrek continue to talk about getting vengeance on Xander. Anya realizes that she needs to find someone who hates Xander to make the wish. Spike walks into the shop, looking for some spell to ease his pain. As Halfrek leaves, Anya offers Spike a bottle of whiskey.

Willow works on her computer to try and trace the camera found in the gnome. At the same time, Jonathan finally completes his work with the disk and performs a ritual that highlights a spot on a Sunnydale map. The Trio's happy to locate the target, but the map abruptly catches on fire. Meanwhile, Anya and Spike are drinking together and complaining about their respective relationship problems. Spike sympathizes with her over the way Xander treated her, so Anya tries to use that to her advantage, but Spike doesn't actually make a wish.

Willow finally taps into the source of the camera and discovered that there are cameras all over town in most of the Scooby Gang's hangouts. The gang realizes the Trio were responsible, which galvanizes Buffy.

At the Magic Box, Spike compliments Anya, and the two start to see a common tie between them. She feels guilty about what happened with Xander, and Spike consoles her. The two kiss and undress. Andrew realizes someone's tapped into their video feeds. Willow stumbles upon the Magic Box feed, just as Spike and Anya are having sex on a table.

Warren directs Andrew to shut down the videos, but they're suddenly distracted by the action on the Magic Box camera. Back at the Summers' house, Buffy, Dawn, and Xander also see the computer screen and what's going on at the shop. Xander's infuriated, while Buffy's hurt and goes outside. Dawn follows Buffy and finds out the truth about Buffy and her relationship with Spike. Willow then informs them that Xander is gone and left with an axe.

Spike and Anya get dressed silently. Spike leaves the shop and Xander attacks him just outside. Goading him to fight back, Spike reminds him that it is not possible due to the chip. Xander proceeds to further thrash the vampire. Just before he can stake Spike, Anya comes outside and tries to stop Xander. She manages to distract him long enough for Buffy to knock him out of the way. Xander and Anya yell at each other about each other's rights for vengeance and moving on with their lives. Xander is disgusted that Anya would even touch Spike. Spike then adds that he was good enough for Buffy. With this, Xander and Anya discover the truth about Buffy and Spike. Xander storms off, so Buffy also walks off. Spike begins making a wish to Anya, but she stops him and they part ways.

Tara goes to Willow in her bedroom. She gives her a speech about all they have to do to rebuild their relationship, but is willing to skip all that. She asks Willow to just kiss her, which she promptly does.

Buffy: "And, you know, maybe in a couple of months they'll let us visit the leather birthday jacket."
A young mother pushing a baby stroller calmly cuts across, about to bump into Dawn, who is looking at a store. Buffy takes Dawn's arm to steer her out of the way. Dawn jumps, ever so slightly at Buffy's touch, startled. They both stop, looking at each other, embarrassed, realizing what just happened.
Buffy: "Oh. That wasn't— I was just— Sorry."
Dawn: "No, no. I'm sorry."
They walk for a moment in silence. The mood has changed, become strained.
Buffy: "I would never—"
Dawn: "I know. You weren't you."
They walk for another moment. More silence. Then Buffy forces herself to snap out of it, tries to lighten the mood:
Buffy: "Okay, you know what we need?"
Dawn: "What?"
Buffy: (re: food court ahead) "Warm chocolate chip cookies. Just as warm as puppies, and somewhat tastier."

Willow: "Can't help thinking maybe you were closer than you thought that day you went out with the addresses."
Buffy: "And they sent Psycho Demon to interrupt me." 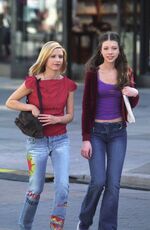 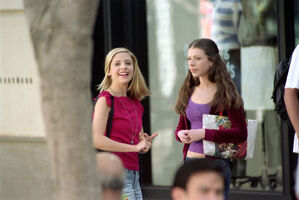 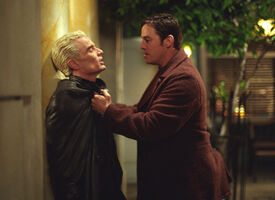 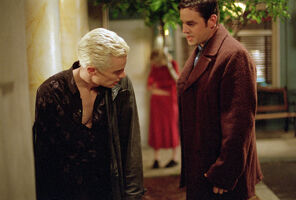 Retrieved from "https://buffy.fandom.com/wiki/Entropy?oldid=222354"
Community content is available under CC-BY-SA unless otherwise noted.