"Enemies" is the seventeenth episode of the third season of Buffy the Vampire Slayer television show, and the fifty-first episode in the series. Written by Douglas Petrie and directed by David Grossman, it originally broadcast on May 16, 1999 on The WB network.

DARK ANGEL — Faith and the Mayor's secret alliance becomes an all-powerful triumvirate of evil against Buffy when they conspire to rob Angel of his soul. Meanwhile, Giles has unofficially resumed his role as Watcher, as Wesley is distracted from his sacred duties by Cordelia's amorous attention.[1]

Buffy and Angel leave the Sun Cinema after seeing a film called Le Banquet D'Amelia — which turned out to be much steamier than they'd expected. To prove that he isn't going to lose control, Angel kisses her, but their sweet moment is cut short when Faith shows up for patrol. While out hunting for the bad guys, the two slayers run into a demon named Skyler, who offers to sell them the Books of Ascension for $5,000. Apparently, these books would be very useful against the Mayor, so, when he finds out about the offer, he asks Faith to kill the demon and take the books.

At the library, the Scooby Gang discusses the Ascension, but they know very little about it, until Willow suggests checking in a book which Giles keeps hidden from her due to its magical content. Inside is a reference to a diary entry which warns of an Ascension the next day and the entire town he inhabited disappeared overnight. Cordelia arrives and makes a date with Wesley. Faith finds the demon, who's desperate to get out of Sunnydale before the Mayor's Ascension, and she kills him. She goes to Angel, apparently upset and seeking comfort from him. Angel refuses to comfort her the way she wants, but Faith manages to sneak in a kiss on the cheek, which Buffy happens to see. Faith's attempt to seduce Angel having failed, the Mayor decides to take his soul in the most painful way possible.

Buffy reports to Giles and Wesley, but having just seen Faith with Angel, a little upset and reluctant to do anything with Faith. After Xander gets the address for the demon from Willy, Buffy goes to find him, and Faith arrives just in time to tag along. When the two reach the demon's apartment, they find him dead. The Mayor talks to a shrouded man about taking Angel's soul away from him. Buffy tells Willow about how she saw Faith and Angel together, and Willow encourages Buffy to talk to Angel about it.

Faith finds Angel first at the Crawford Street mansion and apologizes for her behavior the night before, and then she pours blood onto his shirt. The shrouded man steps out of the shadows and chants a spell. Lights flash, Angel yells, and he pulls Faith to him. They kiss before Angel starts beating her up. The two fight and Faith ends up on top, holding a stake to his heart. A truce is made as Angel agrees to meet the Mayor and the two kiss.

The gang meets again, and makes plans for the night. Willow reveals that she was unable to find anything in the Mayor's computer files since the files were emptied before she could get through to them. Unable to find Faith and Angel, Buffy leaves to find out what's going on with the Mayor, while Wesley takes a very eager Cordelia and the rest of the group, minus Xander, to the Hall of Records to find more information. There, Willow finds a photograph of the Mayor which is over one hundred years old, confirming that he isn't human.

Faith takes Angel to meet with the Mayor, and Angel tries to kill him, but discovers that the Mayor can't be killed. He tells the Mayor of his plans to torture and kill Buffy. The two walk the streets of Sunnydale on the way to Buffy's house, and encounter Xander who Angel punches and knocks to the ground. After charming Joyce, Angel and Faith find Buffy in her room and lure her away to the mansion. Once there, Angel and Faith reveal that they're fighting for the other side now, and Angel knocks Buffy out cold.

Angel chains Buffy to a wall, where she wakes up finding Angel and Faith planning to torture her. Faith goes on about her painful childhood with a mother who drank too much, and her life as the Slayer living in Buffy's shadow. She reveals what she knows about the Mayor's master plans, which will culminate with the Ascension taking place on graduation day. Finally, Faith says with a smile, boasting her ability to deceive the Scoobies: "What can I say? I'm the world's best actor." Angel responds: "Second best." Faith then realizes that she has been the duped — everything that has occurred has in fact been a ruse set up by Buffy and Angel to expose Faith, and Buffy slips out of her chains. The rest of the Scooby Gang arrive as Buffy and Faith fight and end up with knives at each other's throats. Before anyone is killed, Faith breaks away, kisses her on the forehead, and runs off, knowing that Buffy wasn't ready to kill her yet.

At the library, Giles says good-bye to the shrouded man, revealing that the mysterious figure had come to Giles at the beginning and put on a light show in order to pay back a debt the man owed Giles for introducing him to his wife. Wesley is very upset that Giles did all this behind his back, and plans to tell the Watchers Council about it; Giles surprises him by saying that he should, remarking that he can think of nothing more dangerous than a rogue Slayer. Now that everyone is fully aware of Faith's having switched sides, they have to prepare to fight her as well. Faith is upset over the whole ordeal, but the Mayor tells her not to worry because after the Ascension they'll all be dead.

Buffy goes to Angel, and both are having a hard time dealing with what they had to do. Angel feels horrible that he had to do and say the things he did, and how far he let it go. Buffy needs some time, but as she leaves, he asks if she's still his girl, and she responds: "Always."

Buffy: "I can't stop thinking about that demon."
Willow: "'Cause of him being chopped up into little bits and all?"
Buffy: "Yeah, Will, let's keep bringing on the visuals."

Wesley: "You failed in last night's mission because you lacked faith. If you had simply... 'Lacked Faith'. A pun. From me! Well. Bet you never thought I had the funny in me, eh?" 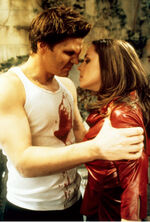 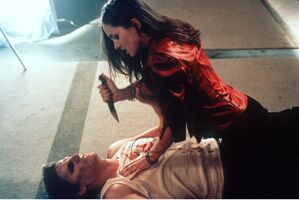 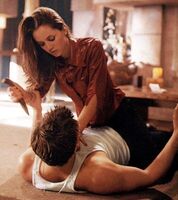 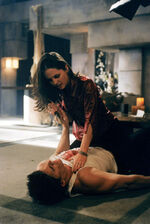 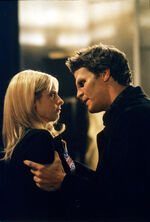 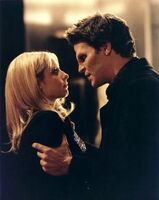 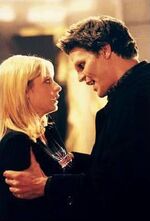 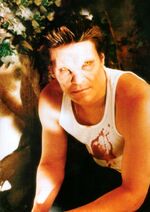 "Tonight, good is evil, evil is good. And anyone could be your enemy."