"Empty Places" is the nineteenth episode of the seventh season of Buffy the Vampire Slayer television show, and is the 141st episode in the series. Written by Drew Z. Greenberg and directed by James A. Contner, it originally broadcast on April 29, 2003 on UPN.

POWER SHIFT — Buffy and the gang attempt to recover from the results of their attack on Caleb in various ways. Faith takes the potentials out for a night at the Bronze, much to the chagrin of Buffy. Giles and Willow hunt down information on Caleb that sends Spike and Andrew on a road trip to find out more abou the strangely powerful preacher. And Buffy has another meeting with Caleb that leads her to want to make another attack against him, but dissension is among the ranks.

People and cars crowd the streets as everyone in town rushes to escape the Hellmouth. Buffy spots Clem in his car on the way out of town and the two chat. Clem accidentally expresses his doubts that anyone can avert this particular apocalypse and suggests Buffy leave town this time. Buffy admits she probably should, and the two bid each other farewell.

A police officer gives Giles and Willow some paperwork on Caleb after Willow uses some mind control to convince the officer that they're with Interpol. As Willow and Giles leave, other cops present the officer with information on a fugitive loose in Sunnydale. At the hospital, Buffy relays information to Xander from the doctor's about his recovery and his expected return home that night, while Willow sits with him. Buffy takes the folder from the police and leaves to continue with Slayer work, despite the fact that Willow and Xander were somewhat expecting Buffy to stay.

Xander jokes with Willow about his injury and she tries to join in, but her resolve doesn't last long and she starts to cry. While Andrew draws pictures on a large sketch pad, Anya lectures the Potential Slayers about killing Turok-Hans and how difficult that will be for them, but the girls have their minds focused on the danger posed by Caleb. Kennedy and Amanda sneak up to the kitchen and talk with Faith about the lack of progress they're making with Caleb.

Buffy returns home with the police reports and divides it amongst Faith, Dawn, and the other girls for research. Dawn prods Buffy for information about Xander's condition, but Buffy has a hard time thinking about it, let alone talking about it. Kennedy mentions how Caleb was able to easily overpower Buffy, unintentionally making Buffy feel very guilty. Buffy takes the reminder badly and heads out to the school to pick up the rest of her belongings, sending the Potentials downstairs to be with the others and instructing Faith to lead the research effort.

The school has been mostly emptied and Buffy makes her way into Robin's office. She sees a picture of herself, Willow, and Xander and begins to cry, when Caleb emerges from the shadows and criticizes her tears. He brings up Xander and Buffy threatens to kill him if he goes near her friend again, but Caleb takes her threat as an invitation for more. He assures Buffy that she's got an important role in this future and they start to fight, but Caleb grabs Buffy by the throat and sends her flying through a glass window to land unconscious across the hall.

At the house, Dawn shows Giles several pictures she's found in her research. Giles spots Caleb's mark on the wall in a picture of a church in Gilroy. Spike is sent for and given the job of investigating this lead. To get Andrew out of the house, Giles sends him along with Spike, despite Spike's protests. To keep the Potentials busy while they wait for Spike and Buffy to return, Faith takes the girls to the Bronze for some dancing and partying fun. Buffy returns to find the girls gone, but Giles still there. He updates her on the latest and she doesn't take kindly to the fact that Spike was sent to investigate Caleb's potential home. She thinks Spike's the only one she's able to depend on, that the others are untrustworthy and then leaves to retrieve the Potentials and Faith from the Bronze.

Caleb returns to the Shadow Valley Vineyards and reports to the First Evil about his encounter with Buffy and boasts about the success he had in leading her right into another well-planned trap. At the Bronze, Faith takes an alcoholic beverage away from Amanda, and then returns to the dance floor where a group of police officers find her. Bypassing the questions of Dawn and the Potentials, Faith goes outside with the officers, where the men make it clear they intend to deal with her on their own rather than send her back to jail.

The men attack her with fists and battering sticks, while Faith tries to hold her own against them. One officer guards the door of the Bronze and keeps everyone inside while Faith is beaten up outside. The girls stand up for themselves and disarm the officer, then proceed outside to help Faith fend off the cops. Buffy arrives at the end of the fight and without waiting for an explanation, sends all the Potentials home, then turns to yell at Faith. Buffy argues with Faith about the decision to let the girls go to the Bronze, drink, and fight and the possible harm that could have come to the girls. Faith turns the table on Buffy by reminding her that Buffy led them into a dangerous situation and they didn't all come out fine, for which Buffy punches Faith. Meanwhile, Andrew rides on the back of Spike's motorcycle while they talk about onion blossoms, a conversation Spike wants no one else to know ever happened.

Faith sits on the porch and smokes as Robin arrives for the Scoobies meeting. They talk about Faith's newly acquired bruises and the issues they both have. Spike leads the way into the monastery with Andrew and they're attacked by a man bearing Caleb's burn mark on his face. Back at the house, Xander is guided inside and welcomed by his friends and the Potentials. Buffy talks to the whole group about what she's found out and announces that they need to go back to the cellar at the vineyard, an idea which everyone else is naturally horrified at, given what happened the previous time. Spike interrogates the man, a preacher, and persuades him to help them. The preacher shows Spike and Andrew about a secret room inside the monastery with words on the wall — words that angered Caleb once he read them. Spike translates the words from the original Latin as they reference something that is only for "her" to hold.

Buffy continues to argue her point and the reasoning that Caleb is protecting something crucial at the vineyard, but no one agrees with her. Faith and Giles express their logical opposition and the Potentials jump in with attacks of Buffy's decisions. Willow questions Buffy's judgment and Anya informs Buffy how her Slayer powers don't earn her the right to be the sole leader, they just makes her more fortunate than the rest of them. Buffy stresses that she's the one in charge who has to make the decisions regardless of their opinions on the situation. Everyone else disagrees, and the idea is raised that Faith is a Slayer, too — and maybe they should vote on who the leader is. Faith rejects the idea of taking over command, but questions whether Buffy could actually handle someone else taking the lead. Even Xander expresses his displeasure with Buffy's point of view. Buffy refuses to go along with the others, and so Dawn stands up and regretfully asks Buffy to leave, since she's unable to accept the overwhelming vote of everyone else.

Buffy leaves the house. Faith follows her outside and tries to let Buffy know this wasn't her idea. In tears, Buffy lets her know that it's her responsibility now and asks her to take care of them all.

Andrew: "This one time, when I was in Sunday school, I woke up late, so my mom made me skip breakfast and I was really hungry, so I told the teacher I had to go to the bathroom, but I really broke into the supply closet and ate a whole package of communion wafers."
Spike: "Yeah? Good on you, boy."
Andrew: "But then I got sick for two days."

Anya: "Andrew's got plenty of tears left in him. Just tell him they canceled 'Stargate'." 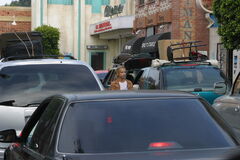 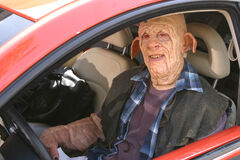 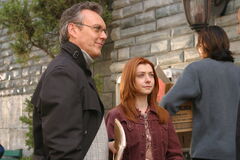 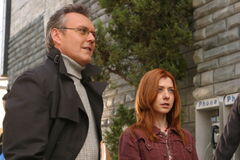 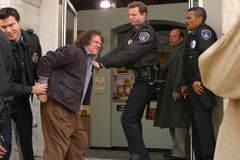 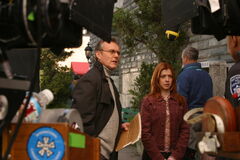 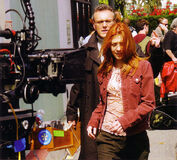 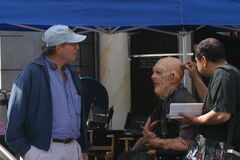 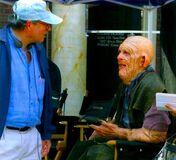 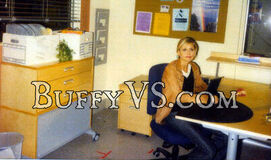 Retrieved from "https://buffy.fandom.com/wiki/Empty_Places?oldid=226361"
Community content is available under CC-BY-SA unless otherwise noted.