Eliza Patricia Dushku (born December 30th, 1980) is an America actress best known for her television roles, particularly her recurring appearances as Faith on Buffy The Vampire Slayer and its spin-off series, Angel.

She has also starred in two Fox series, Tru Calling and Dollhouse.

Dushku was born in Watertown, Massachusetts. Her father, Phillip R. Dushku, was an administrator and teacher in the Boston Public Schools and her mother, Judith "Judy", was a political science professor. Her father is Albanian and her mother is of Danish and English descent. Dushku attended Beaver Country Day School in Chestnut Hill and graduated from Watertown High School.

Dushku came to the attention of casting agents at the age of 10. She was chosen after a five month search for the lead role as Alice in the film, That Night. In 1993, she landed the role of Pearl alongside Robert De Niro and Leonardo DiCaprio in This Boy's Life, a role she has later said opened a lot of doors. The following year, she played the teenage daughter of Arnold Schwarzenegger and Jamie Lee Curtis in True Lies. She had parts as Paul Reiser's daughter in Bye Bye Love and as Cindy Johnson in Race The Sun.

Dusku took time away from acting to complete her junior and senior years of high school. She was accepted into the George Washington University in Washington D.C as well as a place in Suffolk University in Boston, where her mother works as a professor.

After completing high school, Dushku took the role of Faith on Buffy The Vampire Slayer, a Slayer much more troubled than title character, Buffy Summers. Though initially planned as a five-episode role, the character became so popular that she stayed for an entire third season and returned for two episodes in season four; a part that played out the remainder of her character arc in spin-off series, Angel. Re-dedicated, Faith became a more heroic character in other episodes of Angel as well as returning for the final five episodes of Buffy.

In 2000, Dushku starred in cheerleader comedy, Bring It On and followed it up with Soul Survivors, reuniting with her Race The Sun co-star, Casey Affleck. In 2001, she appeared in The New Guy with DJ Qualls and City By The Sea with Robert De Niro and James Franco. The same year, Dushku was invited to be a part of Jay and Silent Bob Strike Back.

In 2003, Dushku starred in horror film, Wrong Turn as well as indie comedy-drama, The Kiss. She was also cast as the lead in new Fox series, Tru Calling where she played medical student, Tru Davies. Dushku turned down the chance to appear in another Buffy spin-off which would have focused on the character of Faith.

Dushku appeared in an Off-Broadway production entitled Dog Sees God in December 2005 where she played Van's Sister. She quit in February of 2006 along with other cast members amidst rumours of an abusive producer.

Dushku appeared in the Simple Plan music video for 'I'm Just A Kid' and in the video for 'Rockstar' by Nickelback.

Duskhu has also appeared in a total of five video games. She voiced the role of Yumi Sawamura in the English version of Yakuza for Playstation 2, released in 2006. She also starred as Shaundi, one of the lead characters in Saints Row 2 released on Playstation 3 and Xbox 360 in 2008. Dushku leant her voice to the lead character, Rubi Malone in WET. 2013 also saw Dushku announce her reprisal of the role of Shaundi in Saints Row IV.

In October 2005, Dushku announced filming had begun for Nobel Son alongside Danny DeVito and Bill Pullman. The movie was released at the 2007 Tribeca Film Festival. On Broadway was another independant movie shot in her hometown of Boston. It's been shown in various film festivals and won several awards.

Dushku co-starred with Macaulay Culkin in Sex & Breakfast released in 2007. She also starred in films, Open Graves, The Thacker Case and The Alphabet Killer.

In 2007, Dushku revealed she had lured Buffy creator, Joss Whedon, back to TV and that they had discussed and agreed to create TV show, Dollhouse. Duskhu produced the show and also starred as lead character, Echo, along with Amy Acker (Winifred Burkle), Summer Glau (Prima Ballerina) and Alexis Denisof (Wesley Wyndam-Pryce).

Dushku lives in Laurel Canyon, California. On a visit to Albania in 2011, she applied for Albanian citizenship and recieved an Albanian ID card and passport.

She is the founder and CEO of Boston Diva Productions and serves on the board of directors of the THARCE-Gulu Organization (The Trauma Healing and Reflection Center in Gulu).

Dushku began dating former Los Angeles Lakers basketball player, Rick Fox in October 2009 and in August 2010, it was confirmed they were living together. In December 2011, Dushku announced she had moved to a vegan diet. 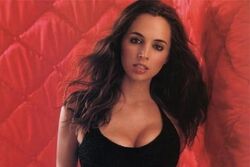 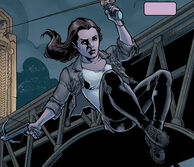 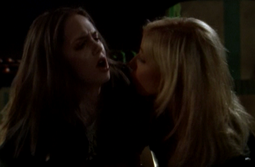 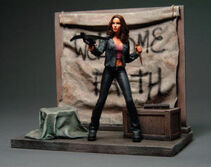 Xander&faith.png
Faith 12.png
Add a photo to this gallery

Retrieved from "https://buffy.fandom.com/wiki/Eliza_Dushku?oldid=130611"
Community content is available under CC-BY-SA unless otherwise noted.