Electrokinesis was the ability to generate and manipulate electricity, electric currents and lightning.

This usually was an offensive power, channeled through the user's hands that could induce varying degrees of damage but it also could be concentrated to manipulate electronic devices and technology. Magically energy itself manifested as red bolts of electricity. Magic practitioners dosed in heavy amounts of magical energy would extrude small electric discharges from their hands.

The Glove of Myhnegon allowed the user, along with some chanting, to summon lightning from the sky and direct lethal blasts of electricity to any target.

The Taser blaster are techno-advanced weapons created and used by the Initiative to capture Hostile Subterrestrials by projecting electrical energy.

Adam was able to absorb electrical energy to strengthen himself, thus making the Initiative's trademark taser blasters not only completely useless against him, but also dangerous to the user.

Willow Rosenberg has shown to have magically generated bolts of harmful electricity on three specific events:

Rack was a powerful warlock who supplied other magic users with magical energy in the form of red electric bolts.

The demon D'Hoffryn could teleport in bolts of lightning similar to Willow, attacking anyone of a close distance. He also could teleport another person with him by holding onto them like he did with Willow. The teleportation could cause a large scorch mark.

Gwen Raiden had the power of creating and manipulating electricity from a very young age and could not touch others without causing them harm up until she obtained L.I.S.A.. Growing up, Gwen learned to use her ability for a number of functions. She could manipulate electronic devices such as changing the direction of security lasers and augmenting herself in combat with her electricity, sending deadly shocks with each strike. She used this on Angel but couldn't kill him since he was a vampire, instead briefly restarting his heart. She also easily killed the human Charles Gunn with her power but then used it to then revive him.

The Senior Partners had the power to fire lightning bolts powerful enough to hospitalize Beck. 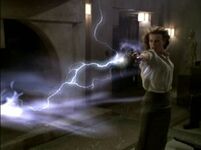 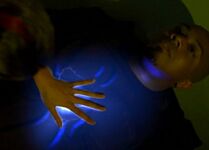 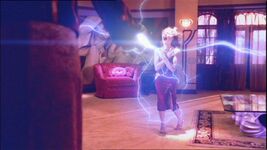 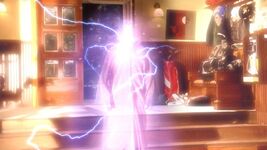 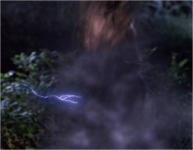 Add a photo to this gallery
Retrieved from "https://buffy.fandom.com/wiki/Electrokinesis?oldid=187091"
Community content is available under CC-BY-SA unless otherwise noted.