"Earshot" is the eighteenth episode of the third season of Buffy the Vampire Slayer and the fifty-second episode in the series. Written by Jane Espenson and directed by Regis Kemble, it was originally broadcast on September 21, 1999, on The WB network.

PENNY FOR YOUR THOUGHTS — A near-fatal run-in with a pair of oozy, mouthless demons unexpectedly leaves Buffy with the awesome ability to hear other people's thoughts, but this newfound power ultimately threatens to overwhelm and destroy her as the cacophony of thoughts isolates her from the rest of the world and drives her to the brink of insanity. When Buffy's clairvoyance unearths a potential mass murder plan at the school, Giles, Willow and the rest of the gang spring into action to locate the would-be killer and thwart a schoolyard massacre, while Angel endeavors to keep Buffy from spiraling into telepathy-induced madness.[1]

While on patrol, Buffy fights two mouthless demons. One manages to escape, but Buffy slays the other. Meanwhile, some of the demon's blood is absorbed into her hand. The next day at the library, the Scooby Gang gather for another group meeting, where they find that Giles is making little to no progress with the Mayor and has no clue what the Ascension is. Wesley soon arrives, promising new updates, but his information is exactly the same as Giles'.

Willow and Buffy talk about Angel's recent acting as soulless to get close to Faith. Buffy is worried that he and Faith may have gotten more intimate than she saw. Willow suggests that Buffy talk to Angel and straighten things out. Percy arrives, telling Willow that they'll have to reschedule their planned study session. Willow then talks to Buffy about the basketball game held after school later that day. Apparently, everyone except for Buffy is going.

Buffy is bothered by persistent itching on her hand, and decides to talk to Giles. After a little research, he tells her that the demon's blood might have infected her with an "aspect of the demon." Later that day, Xander, Willow, Oz, and an absent-minded Buffy watch a pep rally, where Willow catches Buffy feeling her head for horns. Willow further horrifies her by wondering if the demon is male. That night, Buffy meets Angel during her usual patrol and tells him about the demon. Angel tells her that he'll still love her no matter what she looks like, though his exact wording only freaks her out even more.

The next day at school, Buffy finds the rest of them ecstatic about the game from the day before. When Cordelia passes by, Buffy hears Xander wondering if she and Wesley had ever kissed before. She responds to him, aloud, and he remarks that "[Buffy] read [his] mind." Buffy then walks through the school halls, where she finally realizes she's hearing people's thoughts. Freaked out, she talks to Giles about her new ability, and he realizes the mouth-less demons are telepathic. Buffy seems overjoyed about it, and Giles says that this power may be very useful in combat.

Buffy can't resist to use it to her advantage in class first, though. During a class on literature, she answers the teacher's questions with no difficulty, impressing the rest of the students and especially the teacher. Buffy then hears the thoughts of Freddy Iverson, who writes editorials for the school newspaper, and has a seriously negative opinion about everything and everybody at Sunnydale High School.

Later that evening, Buffy visits Angel at the mansion and attempts to use her mind-reading abilities on him to discover what really happened with Faith. Angel realizes what she is trying to do and tells her she won't be able to read his thoughts. He reassures her that what happened with Faith meant nothing and that in 243 years, he's only ever loved Buffy.

The gang meets up at the library again the next morning, where Buffy tells her friends about her new power. She finds Xander constantly thinking about sex, and Wesley keeps thinking about Cordelia. Oz thinks extremely deep thoughts, while Willow is upset because Buffy has access to Oz's mind and will learn more about him than she ever will. While in the school cafeteria, Buffy's telepathy starts to become painful, as the voices become too much for her to endure. Out of nowhere, a single, menacing voice stands out among the pandemonium: "This time tomorrow, I'll kill you all." Buffy passes out, overwhelmed by the cacophony of others' thoughts.

When she regains consciousness, Buffy tells the Scoobies to interrogate everyone in the cafeteria in order to figure out who the killer is. Giles tries to find a cure for Buffy, but before she leaves to rest at home, she hears the painful truth: she'll go insane if the telepathy continues. At home, while trying to comfort Buffy, Joyce inadvertently lets slip through her thoughts that she and Giles had sex on the hood of a police car under the influence of the band candy. Twice.

Meanwhile, the rest of the gang starts interrogating members of the faculty and the students. They make little progress with their research and every likely suspects are crossed out, except for Freddy, who Oz can't seem to find. In the meantime, Giles and Wesley had come across a potential cure for Buffy's telepathic abilities, though it requires the heart of the second remaining demon. Angel hunts down the demon at the cemetery, and successfully acquires the heart.

He brings the ingredients needed for the spell to Buffy's house the next morning and forces her to drink it, telling her that it's okay and he's there to help here. Buffy's body soon undergoes convulsions and Angel calls for Giles. Then she loses consciousness. Moments later, she wakes up again, good as new, and heads to the school to straighten the mess out.

Meanwhile, the Scoobies finally corner Freddy in his office, where they realize that he isn't the killer. Rather, he's been avoiding Oz out of fear of retaliation for a negative review he had written about Dingoes Ate My Baby. Oz isn't mad at all; he remains calm, saying, "No, that's fair."

Buffy shows up just as Cordelia finds a letter on Freddy's desk from Jonathan, an ignored and disregarded student, announcing a dire plan. The gang then splits up to look for Jonathan.

Meanwhile, Jonathan loads a firearm, ready to pull the trigger, up in the high school clock tower. Buffy locates him and quickly jumps into the tower to confront him. Jonathan remains hostile at first, claiming that he is tired of everybody disregarding him for his small size and his lack of abilities. Buffy civilly talks to him, telling him that the reason everybody ignores him is that they have their own problems to deal with. Musing on how deafening silence can truly be, the two study the people milling below. Buffy gently prompts Jonathan to hand the rifle over to her, which he does with quiet, subdued grace. Buffy disposes of the weapon, but is then surprised to learn he hadn't planned to murder anyone: he had actually gone to the tower to kill himself.

Elsewhere, Xander is still looking for Jonathan in the cafeteria, and while picking at some Jell-O, looks up and sees the overweight lunch lady putting rat poison into the students' food. They stare at each other for a few seconds before Xander runs out and warns everybody to stop eating their lunch. The lunch lady pursues him and tries to attack Xander with a cleaver. Buffy shows up in time and knocks the weapon out of her hands. The lunch lady calls the students "vermin," always eating and never stopping. Buffy decides that the lunch lady has lost her mind and knocks her unconscious.

The next day, Giles and Buffy discuss the recent adventure. Buffy is relieved not having any voices in her head; Jonathan has some repercussions to deal with, but Buffy seems confident of his recovery, even dreading he might ask her to the prom. Going over business as usual Giles asks her if she's up for some training, and Buffy agrees. She then remarks: "We can work out after school, if you're not too busy having sex with my mother." Giles walks straight into a tree. 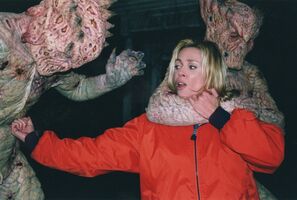 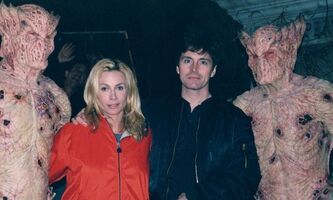 "Tonight, Buffy hears the voice of a killer. And it's coming from inside her head..."