One Girl in All the World

“Well, personally, I kind of want to slay the dragon.”
―Angel[src]

Dragon was a mystical creature with the appearance of a flying reptile.

In 1906, a woman named Ling Kai was transformed into a dragon by a mystical tattoo. She wreaked havoc throughout San Francisco until Angel managed to calm her down and revert her to human form. Afterwards, a mystic named Xin finished the tattoo, releasing Kai from the dragon spirit's influence.[1]

In 2000, when talking to David Nabbit, Angel mentioned he had seen a few dragons before.[2]

In 2001, a dragon was released in Sunnydale when the hell goddess Glorificus used the Key to break down the barriers between dimensions. The barriers were eventually restored upon Buffy Summers' death, although the fate of the dragon is unknown. This dragon possessed four legs and a pair of wings[3].

Three years later, when Angel brought down the Circle of the Black Thorn, the Senior Partners retaliated by unleashing an apocalyptic horde of demons upon Los Angeles, which included a dragon.[4] Angel expressed a desire to slay the creature, but upon discovering that it was actually benevolent, the pair became allies. This dragon was eventually named Cordelia (despite being a male), and later wound up in the company of the Groosalugg.

In 2004, before he learn Dana’s real nature, Spike though she was possessed by an elemental Water Dragon.[5]

The Senior Partners second army contained a large number of dragons; some of the more formidable of these had rear ends that resembled fighter jet planes. Most if not all of these dragons were killed by Illyria in her original body as an Old One.[6]

Buffy Summers once dreamed of doing battle with Morgala, an apocalyptic dragon brought to life in Sunnydale by his worshipers. He was defeated by the Slayer, who removed the gem from his forehead before any damage was done.[7]

During the Twilight apocalypse when the dimensional barriers were breaking down, several creatures from other dimensions appeared and attacked the forces in the Sunnydale crater, including a dragon. This dragon was killed by Willow Rosenberg who summoned a giant tree root from the earth to pierce the dragon. Willow was able to conjure up such powerful magic because she had been recently exposed to the Seed of Wonder.

After the end of magic, the archmage Alasdair Coames collected magical artifacts and housed magical creatures. His possessions included a small dragon.[8]

Years later, the Shenlong dragon was summoned to attack San Francisco, and his power over storms brought a destructive tsunami. It was repelled by the Scooby Gang, but not before causing untold damage, taking thousands of lives and bringing enormous repercussions for the magical community.[9] 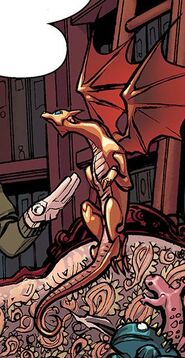 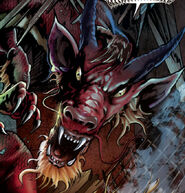 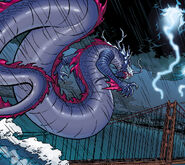