Double Cross, also known as Graduation Day, is the twentieth issue of the Buffy the Vampire Slayer Classic comic book series. Written by Doug Petrie and illustrated by Jason Minor, it was originally published on April 26, 2000 by Dark Horse Comics.

At the end of season three, Angel left Sunnydale without looking back, and without saying good-bye to Buffy. This story takes up directly from the season finale, following Angel as he heads to L.A., and Buffy prepares for her life without him in Sunnydale. They earned a lot of enemies together, and now that they're apart, those forces are closing in. But the connection Buffy and Angel had was closer than anyone knew, and those who thought to take advantage of their separation are in for a surprise. Series writer Doug Petrie takes a crack at his first full-length Buffy comic, and it's a doozy. Exploring in-depth the events in last season's finale, and topping it all off is a cover by J. Scott Campbell.[1] 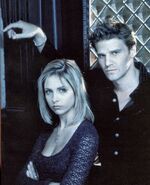 Retrieved from "https://buffy.fandom.com/wiki/Double_Cross?oldid=222114"
Community content is available under CC-BY-SA unless otherwise noted.