"Doppelgängland" is the sixteenth episode of the third season of Buffy the Vampire Slayer television show, and is the fiftieth episode in the series. Written and directed by Joss Whedon, it originally broadcast on February 23, 1999 on The WB network.

A VAMPIRE WILLOW PREYS ON SUNNYDALE — Buffy and the real Willow must save the day when from the bleak alternate universe in which vampires rule Sunnydale, Willow's blood-sucking doppelganger is brought forth into this world and wreaks havoc and confusion on Sunnydale. Meanwhile, Buffy goes into full training mode so she can ace out Faith on the Watchers Council tests, while Faith's unholy new alliance is already paying handsome dividends.[1]

In a local crypt, Anya, who is now a mortal human being, begs the demon D'Hoffryn, her former boss, to create a temporal fold to allow her to go back and retrieve the necklace that was her power center. The demon denies her request, and Anya vows to get the amulet back with or without his help. At school, Willow practices floating a pencil while Buffy does sit-ups in preparation for Slayer testing. When Buffy mentions Faith, Willow loses her emotional control and the pencil goes flying into a tree.

Principal Snyder orders Willow to tutor one of the school's basketball players, Percy West, in History, despite her protests. Later, at the library, Giles asks Willow to make another attempt to break into the Mayor's files. Faith and Wesley come in after training on the obstacle field and Faith finds out about Willow searching through the Mayor's files and informs him of it.

The Mayor presents Faith with a brand new, fully-furnished apartment and then tells her that he plans to have some vampires kill Willow and make it look like a random attack. He plans on getting her out of the way so she is unable to access his computer.

Back at school, Oz meets up with Willow and informs her about a gig Dingoes Ate My Baby had the other night. When Willow confronts Percy about tutoring him, he gives his own interpretation of events: That she is to do his work for him. Buffy and Xander pick the wrong moment to ask Willow if she recorded a TV show for them the other night. Willow, offended at being labeled "old reliable", storms away, threatening to do something irresponsible — change her look, cut class, or eat a snack between meals.

Anya finds Willow and asks her to help her with a spell — some dark magic. Willow, eager to do something shocking and unreliable, agrees. The spell involves chicken feet and the ritual pouring of sand over the representation of the object desired to be pulled out of the alternate dimension. The two perform the spell in an empty classroom, and as it's working, several scary images flash before their eyes. Shocked, Willow moves, accidentally spilling some of the ritual sand on herself. In the reality created by Anya's last spell as a vengeance demon, Willow's vampire counterpart disappears from the factory just moments before she was destined to be staked. After the spell is finished, seemingly unsuccessfully, Willow refuses to try the spell again because she is unnerved by what she saw. In an abandoned warehouse, Vampire Willow appears, looking confused.

Vampire Willow walks through Sunnydale, clearly out of sorts in a world in which humans freely walk the streets at night. She enters the Bronze. Percy finds her and warns her to finish his paper. Vampire Willow throws him across the pool table, then tries to strangle him. Xander breaks up the fight and Vampire Willow recognizes him, only to be disappointed that he is actually alive. Buffy is surprised by Willow's new leather look, and even more surprised when Willow snarls at her with vampire face.

As Buffy and Xander watch her, heartbroken, Vampire Willow leaves the Bronze and is attacked by the two minions of the Mayor sent to kill the human Willow. She easily defeats them and tortures them until they agree to work for her. Her plan is to change this Sunnydale into the one she is used to.

Buffy and Xander return to the library and tell Giles the upsetting news that Willow is dead. The three sit mournfully recalling their friendship with her until the actual Willow shows up. Xander tries to chase her away with a cross, and Willow merely looks puzzled; recognizing that this Willow is not a vampire, her friends simultaneously enfold her in a crushing embrace.

Meanwhile, at the Bronze, Anya tries to get a beer at the bar, claiming she's 1120 years old. The bartender, unfazed by her claim, refuses, so she settles for a Coke. Angel shows up looking for Buffy. Vampire Willow and her new minions appear, taking control of the Bronze. Angel leaves to get Buffy and Oz watches as Vampire Willow kills a a girl. Anya, recognizing what has happened, approaches Vampire Willow with the idea of restoring her to her own world (and Anya's amulet to herself).

Angel goes to the library and announces that Willow is dead, before noticing Willow standing there. They all head for the Bronze, but Willow turns back to get something and is caught by Vampire Willow. The two banter back and forth until Willow finally shoots her evil double with Giles' tranquilizer gun and locks her up in the library cage. Willow ponders how weird it is to be with her double, and how completely opposite she is from herself. Buffy reassures her that there's no similarity at all between a person and the demon they become when they've been turned into a vampire. Angel starts to object that that's not true, but quickly silences himself. At Buffy's suggestion, Willow swaps clothes with her sleeping double. Uncomfortable in the tight, leather attire, Willow does her best to pose as Vampire Willow while the rest of the Scooby Gang wait outside the Bronze.

Cordelia arrives at the library and finds Vampire Willow — wearing Willow's fuzzy pink sweater — locked in the cage. Before releasing Willow, Cordelia takes the opportunity to lecture her on "the ethics of boyfriend stealing." She psychoanalyzes her relationship with Xander, saying part of the thrill of their relationship was the constant danger. Bored out of her mind, Vampire Willow humors Cordelia in order to get her to shut up. It works, and Cordelia lets her out. Vampire Willow shows her vampire face and pursues Cordelia, cornering her in a restroom. Wesley, hearing Cordelia scream, intervenes and forces Vampire Willow to depart. Cordelia hugs him and asks what he's doing that night.

Willow tries to get as many vampires as possible to go outside the Bronze, where they can pick them off one by one. She also surreptitiously signals to Oz that she's herself and not a vampire. Unpersuaded by Willow's unconvincing act at the Bronze, Anya points out to the Vampire Willow's vampire minions that their leader is a fake. Willow screams, signaling Buffy, Angel, and Giles to enter. As they fight the vampires, Willow retreats to the stage with Oz. Vampire Willow then returns, throws Oz out of the way and starts choking Willow. Buffy breaks it up, but Willow shouts for her not to stake Vampire Willow. Despite fully knowing what her evil doppelgänger is capable of, Willow cannot bear to have her staked. She convinces the others to send her back, arguing that Vampire Willow should have the chance to survive in her own world, a suggestion which the doppelgänger accepts. With Anya's help, Vampire Willow is returned to her world; she is transported back to the middle of the brawl in the factory. She has just enough time to smile at being returned to her reality before Oz grabs her and shoves her against a protruding piece of wood from the humans' cage, just like before. Vampire Willow has just enough time to snarl "Oh fu—" before she turns to dust.

The next day, Buffy asks Willow if she'd like to go out that night, but her experience with her vampire double has made her "feel like staying in, and doing homework, and flossing, and dying a virgin," in order to make up for the "double guilt coupons" Vampire Willow has accumulated. But then, Percy shows up, and before Willow can apologize for not doing his work, he starts treating her with great respect. He presents her with papers on both President Franklin Delano Roosevelt and President Theodore Roosevelt: he wasn't sure which one the report was supposed to be on, and he didn't feel like risking Willow's wrath again. He's even prepared a bibliography and shyly presents her with an apple. Willow, now seeing that perhaps there's something to be said for a little vice, agrees to go out for the evening.

Xander: "It's all my fault."
Giles: "What makes you say that?"
Xander: "I don't know... Statistical probability." 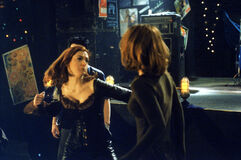 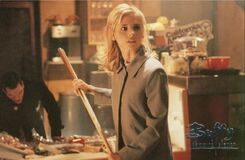 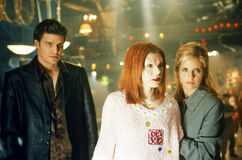 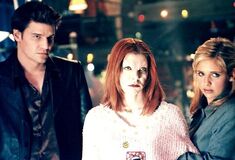 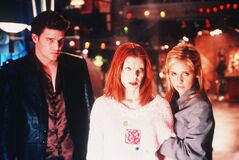 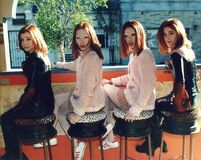 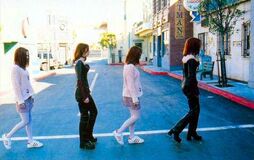 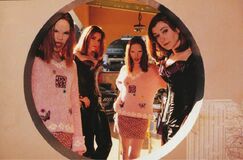 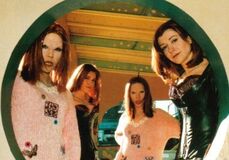 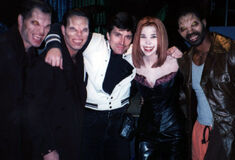 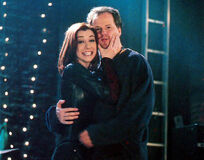 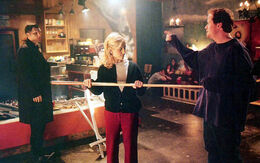 "Tonigh, evil has a new face... and it's a dead ringer for Willow."
Add a photo to this gallery

Retrieved from "https://buffy.fandom.com/wiki/Doppelg%C3%A4ngland?oldid=203854"
Community content is available under CC-BY-SA unless otherwise noted.