"Disharmony" is the seventeenth episode of the second season of Angel television show and the thirty-ninth episode in the series. Written by David Fury and directed by Fred Keller, it was originally broadcast on April 17, 2001 on The WB network.

Angel and his reunited crew try to foil the plans of a vampire cult leader, but Cordelia becomes distracted when her old high school friend-turned-vampire Harmony comes to town after her break-up with Spike and wants to help in the fight.

Angel has a difficult time adjusting to the new situation at Angel Investigations where he is bossed around by Wesley, Cordelia, and Gunn. He is having trouble earning back his friends' trust and atoning for his earlier behavior. Cordelia makes it clear that she is still very angry and they are not friends anymore. Then she gets a vision that sends the men out to help some people being attacked, while Cordelia follows Angel's advice to take the rest of the night off. As she's leaving, an old friend from Sunnydale, Harmony, shows up at Angel Investigations.

The girls talk about their lives and how they've both changed, Harmony failing to mention that she's now a vampire. Harmony tells of her recent breakup, and Cordelia invites her to stay at her place while she's in town. Angel, Wesley, and Gunn find the car from Cordelia's vision, and they go to the rescue of a woman they hear screaming. The woman is saved and the three fight what turns out to be a vampire attacking her. Wesley notices that the green robe the vampire had been wearing has a strange symbol upon it and resolves to research it further. Upset that Cordy doesn't consider them friends, Angel talks to Wesley about Cordelia. He wants to buy her things, but Wesley says Angel cannot buy forgiveness or friendship.

Cordelia and Harmony have a great time chatting over glasses of wine. Harmony is hungry and tempted by her friend's neck. Later that night, Harmony goes to Cordelia's room while she's sleeping with the aim of feeding off her, but Cordelia's resident ghost, Dennis, wakes Cordelia, and an embarrassed Harmony apologizes in such a way that Cordelia interprets Harmony's desires as sexual lust, not blood lust. Cordelia calls Willow to discuss Harmony's midnight bedroom intrusion, which Willow, knowing Harmony is a vampire, understands to be predatory, but which Cordelia believes to be amorous. The two have a confused conversation until Willow sets things straight: Harmony is not a lesbian but a vampire, and cannot be trusted. Cordelia embarrasses herself further by voicing a mild slur before she learns that Willow is now a lesbian. Willow urges Cordelia to get to safety before they talk further, when Harmony suddenly turns up.

Willow calls the hotel and informs Angel about Harmony. He and Wesley rush to Cordelia's rescue, bursting into her apartment with stake and crossbow ready, only to find that the ladies are gossiping together and painting each other's toenails. The men still want to stake Harmony, but Cordelia is offended by the idea, and explains that she is there to help her undead friend. Cordelia brings Harmony to the Hyperion, where she researches the symbol found on the robe. Angel, still attempting to get on Cordelia's good side, agrees that Cordy should be allowed to spend time with her friend, but Harmony greatly annoys everybody else, breaking the computer, defacing one of Wesley's ancient books, loudly chewing gum, and inspiring thirst for human blood in Angel, while ridiculing the pig's blood that he drinks. Meanwhile, Wesley, and Angel try to find other clues from Cordelia's vision, including a large bird figure she saw.

Gunn returns, having found that a large number of humans have recently vanished off the streets, and the gang concludes that, since there are no bodies, the humans are being taken not for food, but to add to an army of vampires.

Inside a large theater, a vampire speaks to a crowd of robed vampires about his plan—a self-actualizing pyramid scheme in which vampires each turn two humans into vampires, and also bring one human to the group's "blood bank," which is a large cage on stage filled with people. He has published a book that tells of his plan, called Selective Slaughter: Turning a Blood Bath into a Blood Bank.

Back at the Hyperion, Cordelia finds that the symbol on the robe is similar to that for a pyramid scheme started by a (human) motivational speaker named Doug Sanders, and it's assumed that he's now become a vampire and is continuing the scheme. Harmony accidentally spills her cup of blood onto the keyboard prompting Wesley to demand that she leave immediately. Cordelia takes her confused friend to Caritas for advice on what path the vampire should take. After Harmony sings "The Way We Were" off key on stage, the Host says that Harmony is struggling to find herself and it is Cordelia who will guide her to her destiny.

The guys find Cordelia at the bar and request her help in locating the specific building where the vampire group is meeting. Harmony tags along, convinced that her mission is the same as Cordelia's--to be good and help people. They arrive at the theater Cordelia saw in her vision. Before heading in, Angel, having been agreeing with everything Cordelia has said up to this point in the hopes of winning back her friendship, decides enough is enough and tells Cordelia that Harmony is a danger and will turn on her. Cordelia is skeptical, saying that Harmony is her friend, and she reminds Angel that he betrayed her as well even with his soul, so she doesn't see much difference between the two of them. Angel tries to explain the difference, but Cordelia interrupts and points out that in addition to the betrayal and abandonment, he gave away her clothes, which has made her very upset.

They ask Harmony to do some spying for them, since they are all too noticeable. While she goes inside, everyone else waits at the back of the building for her to let them in. Harmony sits and listens to Doug's pitch and surveys the area. She meets the group outside and tells them the situation and that there is a cage filled with people, and they all rush in to rescue them. When they get inside, they find Harmony to be loudly gregarious, revealing their presence, and the room is deserted... until the whole group of vampires surrounds them and attacks — Harmony has betrayed them. She thanks Cordelia for guiding her to her destiny, and conveys her happiness at finally belonging, as Doug approaches and offers to promote Harmony to a blue robe.

A fight ensues. Cordelia fights with Harmony while Angel, Wesley, and Gunn take on the members of the vampire cult (most of whom have run away). Doug has his head chopped off by Angel. Gunn and Wesley rescue the prisoners. Cordelia pulls two crossbows on Harmony but instead of killing her, she lets her leave, telling her to get out of town. Harmony immediately departs, and when Angel approaches, Cordelia, expecting an "I told you so" routine, warns him to keep quiet.

Back at the hotel, Wesley talks to Angel about his difficulties with Cordelia, but things take a sudden turn for the better as Cordelia finds a complete new wardrobe on her desk, courtesy of Angel. She hugs him and praises his taste in clothes. Though Angel is happy, Wesley is clearly disappointed. 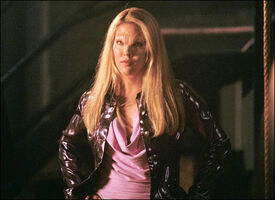 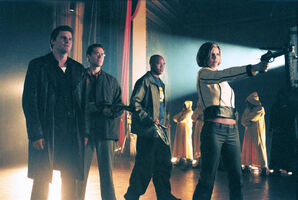 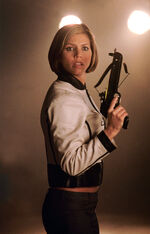