"Dirty Girls" is the eighteenth episode of the seventh season of Buffy the Vampire Slayer and the 140th episode in the series. Written by Drew Goddard and directed by Michael Gershman, it originally broadcast on April 15, 2003 on the UPN network.

SEE NO EVIL — Willow brings Faith back to Sunnydale, just in time for the arrival of Caleb, a misogynist preacher who has aligned himself with the First. Caleb sends a message to Buffy in the form of an almost dead potential slayer, claiming to have something of Buffy's, prompting her to prepare her army of girls for an attack against him to reclaim her possession.[1]

A young Potential, Shannon, is chased through the woods by Harbingers of Death. She accepts the assistance of a stranger driving a truck and is horrified to discover that she has fallen into a trap. The man, Caleb, terrifies her and burns his mark into her neck. He gives her a message for the Slayer, stabs her in the stomach, and forces her out of the car. Faith and Willow find the girl on their way back to Sunnydale and take her to the hospital.

At his apartment, Xander's erotic dream about a pair of teenage Potentials, Colleen and Caridad, is cut short when Rona wakes him up to fix the toilet. At the hospital, Faith asks Willow why the Scooby Gang failed to warn her about the threat of the Bringers, informing Willow that she had been attacked in prison. Faith leaves the hospital in search of Buffy, despite Willow's protestations that Faith should not approach Buffy alone. Faith witnesses Spike chasing a girl through a cemetery. Mistakenly believing that Spike has reverted to his old habits, Faith ignores his attempts to explain and attacks him. Buffy arrives to clear up the confusion, and the girl that Spike had been chasing, now in her vampire form, attacks Faith, who (borrowing a stake from Buffy) quickly slays her. Back at the house, Faith encounters a cold reception from both Dawn and Giles, and Spike explains that the tension is not all because of her. Meanwhile, the First Evil reveals Buffy's form to Caleb.

Andrew tries to bring the Potentials up to speed on Faith's history. While they are quick to point out that Faith had killed a vulcanologist, not a Vulcan, they watch Faith exercising in the back yard with fascination and curiosity. At the school, Buffy and Robin Wood revisit their previous discussion about Spike, and they agree that their alliance against The First Evil is more important than personal agendas. Robin fires her from her school job, emphasizing the need for her to focus on the mission.

When told that Shannon has come to from her injuries, In the Summers' home, Faith sneaks down into the basement for a cigarette and a moment away from the "wannabees" who, in her opinion, have had entirely too much coffee. Faith finds Spike in the basement, and they discuss their common dangerous pasts, as well as various sexual proclivities. Faith reminds him of their previous conversation, which had occurred when she was in Buffy's body. Spike acknowledges that she had made quite an impression at the time. He informs Faith of his relationship with Buffy, which greatly surprises her. Buffy comes downstairs and becomes visibly jealous to find them lounging on Spike's bed.

Buffy quickly leaves for the hospital. Shannon relates her experiences with Caleb. She tells Buffy of Caleb's message: He has something of Buffy's. Later at the house, Buffy tries to motivate the terrified Potentials to accompany her when she attacks Caleb (who, meanwhile, is re-enacting scenes of his past murders with the First Evil). Buffy, alone, is confident in her plan; Giles, Spike, her friends, and the Potentials all question her decision. Buffy and Faith, on a recon mission, follow a Bringer through the woods. They discuss Faith's intentions and her recent experiences with Angel before locating Caleb's stronghold in the old winery Shadow Valley Vineyards.

At the Summers' home, Xander directs the Potentials on the methods of attacking in battle. When Rona criticizes Buffy's intentions, Xander strongly defends his friend. Leaving Willow and Giles to stay behind to protect the more inexperienced girls, Buffy leads Spike, Faith, Xander, and the more experienced Potentials (including Kennedy, Molly, Rona, Chao-Ahn, Amanda, Dianne, and several others) to the Vineyard. They divide into two groups: An assault team and a back-up team. After an initial clash with the Bringers, Caleb appears and the entire attack quickly turns into a disaster. He has super-strength, quickly knocking aside Buffy and Spike, and breaking Rona's arm. Xander and Faith arrive with the back-up team, but Faith is soon knocked unconscious. Caleb kills Dianne and Molly, and an enraged Buffy is ready to fight on until Spike tells her they need to leave now. Xander starts to yell that everyone needs to get out, but is then attacked himself by Caleb, who gouges out Xander's eye with his thumb. Spike tackles Caleb, giving them enough time to get Xander and leave the vineyard.

Alone and distraught, Buffy leaves the injured girls and walks through the empty streets as Caleb tells the First, in Buffy's form, that their victory is imminent.

Faith: "They say your other senses get better. Maybe all blind people are smokin' in a knife fight... Not saying it's likely." 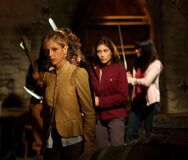 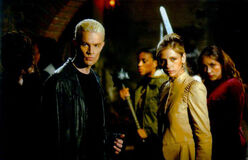 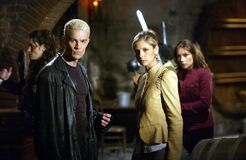 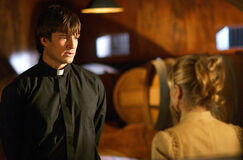 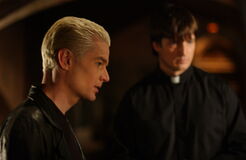 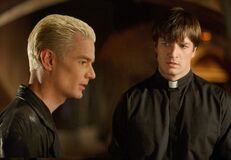 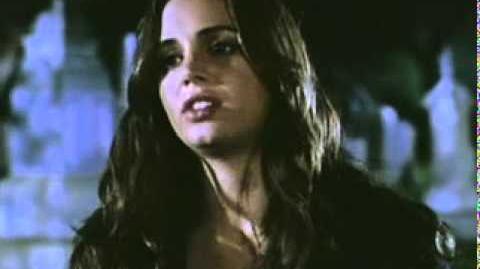