"The Harsh Light of Day"
Dingoes Ate My Baby was an amateur rock band which performed frequently at The Bronze.

Daniel “Oz” Osbourne and Devon MacLeish were the Dingoes’ guitarist and lead singer, respectively. Other than The Bronze, Oz mentioned once that the band was playing at The Shelter Club,[1] had a gig in Los Angeles,[2] and played at Buffy’s house party.[3]

The band played together at least for three years, from 1997[4] to 1999.[2] It is unknown what happened to the band following Oz’s departure from Sunnydale.[5] 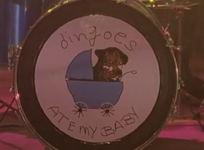 Devon and Oz performing at The Bronze