Cute Devon (by Billy and Katie)

Devon was a vampire hunter who had a secret crush on the "Slayer" Billy Lane. In an attempt to get close to him Devon told him about the threat of the increasingly growing zompire population, one of the countless consequences of Buffy's destruction of the Seed and the exile of Earth's magical forces.

One night when Billy was training in the school's gym, the boys started talking for the first time. That night when Billy was coming home he was confronted by Garron. As Billy prepared to fight back for the first time, Garron was murdered from behind by Post, who had been turned into a "zompire". He was quickly pulled to safety by Devon, who explained that vampires had become more feral in the wake of the End of Magic.

Devon also revealed his knowledge of Slayer mythology and, having witnessed Billy's self-defense training, suggested that Billy begin training as a pseudo-Slayer. Billy was initially skeptical of his own ability, but when Post managed to break into his room and attack them again, he successfully slayed his first vampire and saved Devon's life.

Billy began training regularly under the guidance of Devon, who took on the unofficial role of Watcher to Billy's Slayer. As the boys spent more time together, Katie began to realize that Devon was attracted to Billy, although Billy himself remained oblivious to this fact. As the true scale of the zompire threat became apparent, Devon began to have second thoughts about letting Billy put himself in such danger. However, when the local library where Billy's grandmother Sky volunteered was attacked by a pack of zompires, Billy defied Devon to go and rescue her. Not wanting Billy to go alone, Devon followed and finally admitted his feelings for him. The boys reconciled and worked together to fend off the zompires and save the civilians, including Sky; in the aftermath, Billy and Devon became an official couple.

Billy went to San Francisco to join Buffy Summer's gang and help her in fighting the growing zompire population. The two lovers decided to keep a long-distance relationship and often call each other. When Buffy was mysterious teleported away, Billy contacted Devon for advice. Using a popular culture reference Devon convinced Billy to go to the place where Buffy disappeared and search for clues. 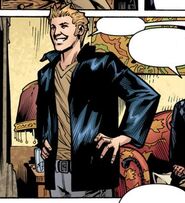 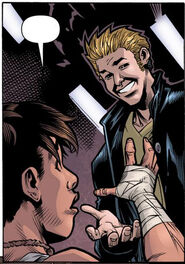 Add a photo to this gallery
Retrieved from "https://buffy.fandom.com/wiki/Devon?oldid=161101"
Community content is available under CC-BY-SA unless otherwise noted.