Dez becomes a full-fledged member of Angel Investigations and actively took part in a mission to locate Angel after he was kidnapped by Innovation Labs, a facility created to turn the rich and famous into vampires using Angel as a reluctant sire. One of those who helped save Angel was an ex-watcher named Laura Weathermill who joins the team as well. Weathermill's supernatural expertise eventually outed the Potentate Jamaerah as a powerful demon in disguise. Dez is later killed by a Soul Eater, sent by James to kill Angel and Spike. Dez's soul was consumed by the Soul Eater, who in turn tried to attack the others. In the aftermath of Dez's death, Illyria asked the team if she should grieve. 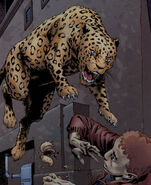 Retrieved from "https://buffy.fandom.com/wiki/Desdemona?oldid=50426"
Community content is available under CC-BY-SA unless otherwise noted.