"Damage" is the eleventh episode of the fifth season of Angel television show and the 99th episode in the series. Written by Steven S. DeKnight and Drew Goddard, and directed by Jefferson Kibbee, it originally broadcast on January 28, 2004 on The WB network.

When an emotionally unstable woman, Dana, escapes from a psychiatric ward, Angel learns that she was tortured as a child and is now searching for her tormentor. Andrew, a watcher-in-training, arrives from Sunnydale with surprising information about Buffy and to inform the group that Dana is also a vampire slayer. Meanwhile, Spike believes that if he can save Dana, he will prove that he is destined to be the vampire champion.[1]

At Wolfram & Hart, Harmony tells Angel what she suspects is a case of demon possession. There was a mix-up with a patient named Dana's medication at a psychiatric hospital, and no longer sedated, she broke down her door, fought and killed one of the paramedics, and escaped.

Angel and Spike arrive at the hospital, where Dr. Rabinaw tells them that Dana had been kidnapped and tortured for months when she was ten, by the man who killed her family. Recently, she gained incredible strength. As Spike leaves to deal with the girl, a nurse provides Angel with Dana's session tapes. She talks in various languages, and he understands what she says in Romanian. He then calls Wesley and informs him: Dana is a Slayer.

At Wolfram & Hart, Giles has sent "his top guy" to take care of Dana, which turns out to be Andrew Wells. He's emotional in his reunion with Spike, then updates the group on how Willow activated every Potential Slayer in the battle at the Hellmouth months earlier. Wesley wonders how the Slayers will be trained now that the Watchers Council is gone, so Andrew explains that Giles and some Sunnydale alums have resuscitated the Council.

As Spike heads off to look for Dana, Angel follows Lorne's suggestion to visit Dana's childhood home with a psychic. Vernon flashes back to Dana's abduction and her family's murder; the smell of molasses and a basement is "where her pain lives," he says. Meanwhile, Dana goes to the basement of the building where she was held captive, flashing back to her torturer injecting her with various drugs. When she looks up at his face, it's Spike.

Andrew catches up with Spike, and updates him on the Scoobies' activities — Xander is in Africa, Willow and Kennedy are in Brazil, Buffy and Dawn are in Rome, and everyone else is in England. Andrew guesses that Buffy doesn't know Spike is alive and wonders why he didn't tell her. When Spike follows the scent of blood into Dana's trap, Andrew tries unsuccessfully to shoot Dana with a tranquilizer gun. Spike chases Dana to the basement, where she starts repeating what her torturer once said to her. Dana, channeling Nikki, recognizes Spike as William the Bloody. Before he can explain that she's dreaming of other Slayers, she injects him with a sedative.

At Wolfram & Hart, Fred realizes that the smell of molasses indicates Dana was held in a distillery, and Angel sends a tactical team to search abandoned distilleries.

Back in the basement, Spike awakens to discover that Dana has cut off his hands. She tells Spike he can't hurt her anymore, but when he insists she's thinking of someone else she finally remembers who her torturer really was. Angel arrives, tells Dana her real torturer is dead, and knocks her out with a tranquilizer dart. Spike is taken to the hospital to have his hands reattached. Later, Andrew tells Angel that because Dana is a Slayer, she belongs in the care of the new Council. Andrew says none of the Scoobies trust Angel now that he works at Wolfram & Hart, and that they aren't on the same side.

Angel visits Spike at the hospital, now with his hands reattached. Spike admits he's never thought much about what being evil means. He says Dana is like them — someone turned her into a monster. Angel notes that she's an innocent victim, but they agree they both were too, once upon a time. 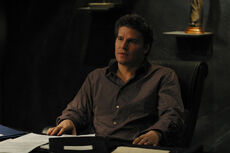 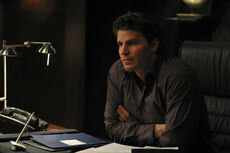 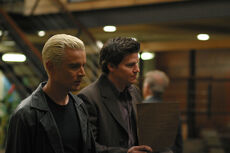 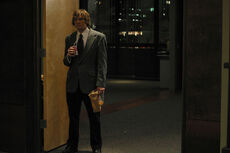 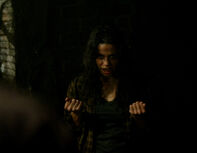 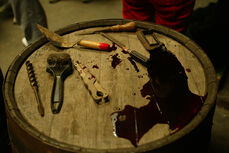 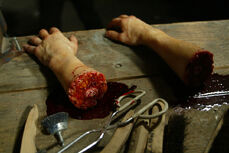