“You gotta do what you can to protect your family. I learned that from my father.”
―Connor[src]

Connor, also known as Connor Angel, Steven Franklin Thomas Holtz and Connor Reilly, is the half-demon son of Angel and Darla. He was portrayed by Vincent Kartheiser and earlier by Connor, Jake and Trenton Tupen.

Within the series, Connor is the son of the central character Angel (played by David Boreanaz) and his lover Darla (Julie Benz), both of whom are vampires. As a child of two dead people, Connor's birth is an impossible one, despite being prophesied and concerns much of the show's third season and from his parents he has inherited many vampire-like powers and abilities. After the infant's painful estrangement from his father, he returns towards the end of the third season as an emotionally inexperienced and mentally unstable teenager who has grown up in a hell dimension and harbors resentment towards Angel. The end of the show's fourth season sees Angel make an enormous sacrifice to rewrite Connor's memories and give him a normal life, and towards the end of the series the two finally reconcile. Connor also appears in ancillary media, such as the canonical comic book continuation Angel: After the Fall, set after the end of the television series.

Connor is born in November 2001 in Los Angeles, California. He is a "miracle" child, a superhuman born of two powerful vampires, Angel and Darla. Darla, unable to physically give birth, kills herself to save Connor (as a vampire, Darla drives a wooden stake through her own heart, so as to leave the newborn Connor more or less unscathed). For the first few months of his life, Connor becomes a part of the Angel Investigations family, jointly raised by the entire group at the Hyperion Hotel.

Connor is prophesied to destroy the time-shifting demon lord known as Sahjhan. In an effort to negate the prophecy and save his own life, Sahjhan travels back and forth through time and rewrites the prophecy to read "The father will kill the son," in reference to Angel and Connor. Shocked and worried for the baby's safety, Wesley Wyndam-Pryce kidnaps the baby and plans on taking him away from Angel permanently in order to save his life. However, before Wesley has the chance to leave Los Angeles, Daniel Holtz orders his follower Justine Cooper to slit Wesley's throat and take Connor as vengeance for Angel's murder of his own family centuries ago. It was Holtz's intent to raise Connor as his own son, renaming him Steven Franklin Thomas Holtz. However, there were several factions that wanted baby Connor for different reasons, ultimately resulting in no one getting what they really wanted. The lawyers at Wolfram & Hart wanted the miracle baby to dissect and analyze it, Sahjhan wanted the baby killed, Holtz wanted to escape and raise the baby as his own, and Angel just wanted his son returned. In an intense power play, Holtz runs into a portal to a hell dimension, opened by Sahjhan, called Quor Toth, with baby Connor in his arms.

“Couple of weeks ago he was wearing diapers. Now he's a teenager?”
―Gunn[src]

Since time runs more quickly in Quor'Toth, Connor ages at an accelerated rate in relation to the time on Earth. He is forced to constantly fight for his life in this violent, demonic dimension. Holtz raises Connor as his son Steven and tells him tales about Angelus, Angel's soulless vampiric persona - especially what Angelus did to Holtz's family, as well as a slightly biased version of what Angel has become since regaining his soul. This effectively turns Connor against his true father and Connor grows to despise him. Mere days have passed since his disappearance in Los Angeles when Connor (called "The Destroyer" by beings in Quor'Toth) suddenly returns, now nearly eighteen years old. He punched a rift out of the dimension and is transported into the lobby of the Hyperion Hotel with one goal: to kill Angel. Conflict and confusion are abundant as Connor adjusts to life in L.A. and is further manipulated by Holtz, who had followed him back into this reality. Eventually, under his own plan, Holtz is killed by his loyal follower Justine in a manner that frames the vampire Angel for the action. Enraged, Connor (with help from Justine) seals Angel in a metal box and sinks him to the bottom of the ocean, where he can survive indefinitely due to his vampiric nature.

Afterwards, Connor seemingly joins Angel Investigations, who, at this point, consists of Gunn and Fred. During this time, their primary mission is searching for clues around the disappearance of both Angel and Cordelia. In the meantime, Gunn and Fred act as Connor's guardians;the two become understandably quite hostile towards him when it is discovered that he was behind Angel's disappearance, but they warm up to him again eventually. Upon Angel's return, relations are quite shaky, yet slowly improve, Connor even starting to call Angel "Dad" on occasion. Due to his difficult upbringing, Connor finds it difficult to develop emotional attachments to people, yet, once she returns, he forms a close bond with Cordelia Chase.

When a seemingly all-powerful demon lord known as The Beast rises from the ground in the very same place that he had been born, Connor feels responsible. As fire rains from the sky, he seeks solace in Cordelia's arms. Unknown to him, and to everyone else, is the fact that Cordelia is under the control of a powerful cosmic entity who seeks dominion over the human race, and who has been orchestrating events since Angel's arrival in Los Angeles after the death of the Mayor of Sunnydale four years before in order to be fully brought forth into the world. Connor's night of passion with Cordelia has serious repercussions as it allows the arrival of this very being, later named "Jasmine." It is revealed that Connor's existence was orchestrated in order for this event to occur.

“I know she's a lie. Jasmine. My whole life's been built on them. I just... I guess I thought this one was better than the others.”
―Connor[src]

Unfortunately, while everyone basks in the glory of Jasmine, who causes immense joy and peace for whomever is in her presence, Connor does not feel the same inner peace and is left with untold loneliness and isolation. Struggling with his inner demons and weary from the constant fighting, both for and against Angel, all he wants is to rest. This ultimately leads him into a desperate situation where he is willing to hurt not only himself, but others as well. In a final act of love, Angel agrees to take over the Los Angeles branch of Wolfram & Hart in exchange for his son's life. As per the agreement, Connor is to have a whole new existence as an ordinary boy raised in a happy family, with no memory of his kidnapping, his childhood in Quor-Toth with Holtz, and the subsequent year since his return. Connor dies at Angel's own hand so that he can be "reborn" into his new life, technically fulfilling the prophecy that "the father will kill the son". Other than Angel (and some special cases like Cordelia and Eve), everyone's memories are rewritten to accommodate this new reality.

Part of his new reality, Connor becomes Connor Reilly, the son of Laurence and Colleen Reilly. However, he is destined to cross Angel's path again. A few months after Angel takes over Wolfram & Hart, Laurence and Colleen bring Connor to the office in order to get some answers about their son. Apparently, Connor was hit by a van and suffered no injuries. Angel sends the family away, saying that there is nothing that he can do for their situation. Soon after, Connor's family is attacked by demons, and in the struggle, Connor displays an amazing feat of strength, much to everyone's surprise. Having no other choice, Angel informs Connor of his special abilities, but leaves out the fact that he is his father. However, the attacks were not random occurrences. Cyvus Vail, an elderly demonic sorcerer and the architect of Connor's new life, drew Connor out on purpose. Vail demands that Connor fulfill his destiny and kill Sahjhan, who Vail considers an enemy. When Angel resists, the demon Vail threatens to return Connor's memories. Connor agrees to the fight, but is outmatched (due to having forgotten his formidable fighting skills). Meanwhile, Wesley discovers Angel's deception and confronts him at Vail's. No longer trusting Angel, he shatters the Orlon Window, a magical artifact holding the memories of Connor's original existence, which upon breaking restores the memories of those nearby (Wesley, Connor and Illyria/Fred) and enables Connor to kill Sahjhan. Even though his memory is restored, Connor says goodbye and returns to the Reilly family.

“Come on. You drop by for a cup of coffee, and the world's not ending? Please.”
―Connor to Angel[src]

On the eve of his final battle with the Circle of the Black Thorn, Angel visits Connor for coffee. Connor reveals that he knows Angel is his father and is grateful for all he has done for him, but prefers to leave it at that. Later, when Angel fights Marcus Hamilton, Connor shows up to fight by his father's side, saving Angel from being staked by Hamilton and helping him to gain the upper hand in the fight. As the Senior Partners begin to exact their vengeance, Angel tells Connor to go home and that as long as Connor is safe, the Partners can never destroy him.

Connor appears in the comic book series Angel: After the Fall, providing humans and good demons sanctuary with the help of the benevolent werewolf Nina Ash and the mutant Gwen Raiden after Los Angeles was sent to hell by the Senior Partners. He also actively kills multiple demons, sometimes alongside his father, the now-human Angel. After the team moves back into the Hyperion Hotel, Illyria reveals to the others that Angel is no longer a vampire. Angry with his father for being lied to, Connor leaves, and is forced to pit Angel's dragon against Gwen when he realises that she is loyal to Gunn. Gwen subsequently gives her life to hold off W&H's army. Subsequently, Connor returns after Angel has been mortally wounded in a fight with the now-vampiric Gunn, and kicks Gunn out a window before convincing a dying Angel to trust in himself and keep fighting to live. After Gunn causes Illyria to revert to her true form, Connor, the wounded Angel and Spike are the only champions left standing. Connor is mortally wounded by Gunn when Gunn tries to prevent Connor, Angel, and Spike from stopping Illyria. He dies in his father's arms, but not before reassuring Angel that he is a good person.

“I need you to promse me something. And you gotta do it, because it's like, a last request. No matter what happens, Angel, don't let them win. You're a good man. Vampire or not - you're a good man.”
―Connor's final words.[src]

Connor possesses the typical abilities of a vampire: superhuman strength, speed, durability, recuperation, and heightened senses; without their typical weaknesses (sunlight, crosses, holy water). He has been bested in battle by both Faith and Angel; however, he is stronger than most vampires and some forms of demons.

In addition to his innate powers, Connor was trained by his foster father, Daniel Holtz, in hunting and in both unarmed and armed combat. 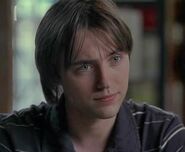 Connor
Afterthefall7.jpg
Connor in After the Fall
Add a photo to this gallery

Angel
Connor was a series regular for the show's fourth season (2002-2003). He appeared in 36 episodes overall. He has made guest appearances in the episodes:

Angel: After the Fall

Retrieved from "https://buffy.fandom.com/wiki/Connor?oldid=27092"
Community content is available under CC-BY-SA unless otherwise noted.