"City Of" is the series premiere of the first season of the Angel television show and the first episode in the series. It was written by Joss Whedon and also directed by him and David Greenwalt. It originally broadcast on October 5, 1999 on The WB network.

Angel moves to L.A., unaware of his purpose in the City of Angels. There, he meets Doyle, his half-man, half-demon spiritual advisor, who gives him much-needed direction. Doyle leads Angel to Russell Winters, a rich and powerful vampire, preying on aspiring actresses. When Winters sets his eyes on Cordelia, Angel must spring into action and rescue her.[1]

Angel slumps at the bar of a dive in downtown Los Angeles, growing maudlin about a who he misses, when he notices three guys leave the bar with two girls. Sliding seamlessly from blithering to dangerous, Angel unobtrusively follows them out. With the aid of stake bracers, Angel dusts the guys, who happen to be vampires, in a dark alley. The frightened girls, one of whom is bleeding from a minor head wound, try to thank their rescuer, but Angel warns them harshly to get away from him, as he is attracted to the blood. He turns and strides down the dark alley.

Angel makes his way to his new home, a basement apartment beneath a ground floor office, where he finds Doyle waiting for him. Doyle introduces himself, explaining he's half human, half demon, then recaps the story of Angel's life, ending with his recent, painful breakup with the Slayer and his subsequent move to L.A. Doyle explains that Angel's isolation, combined with the fact that he recently drank human blood, puts him at serious risk of relapse. Doyle gets visions from the Powers That Be (accompanied by debilitating headaches) regarding people whose lives Angel must touch; true redemption lies not just in saving lives, but in saving souls as well. Doyle concludes by handing over a scrap of paper on which he's jotted info about a young woman named Tina. When Angel asks why Tina needs him, Doyle replies that getting involved in her life enough to figure that out is Angel's first order of business.

Angel finds Tina during her shift and manages to persuade her to meet him after work. Waiting by his car, Angel is surprised to see her in elegant evening dress, and even more surprised when she pulls pepper spray from her purse. Tina accuses Angel of being employed by someone named Russell Winters, but he slowly convinces her to accept his offer of a lift to the "fabulous Hollywood party" she plans to attend. When they arrive, Angel runs into Cordelia Chase, who tells him she is now a successful actress who lives in a condo in Malibu. Tina returns to Angel saying a man named Stacy was hassling her, and that she's ready to leave. On their way into the parking garage, Angel fights off Stacy and his goons.

Meanwhile, in her dingy apartment, Cordelia hangs up her one dress and eats food she smuggled out of the party, while listening a discouraging phone message from Joe, her talent agent. It's clearly the only food she has and she sits, trying to encourage herself with positive thinking, as she tries to convince herself she doesn't want to eat anything. After Tina falls asleep, Angel spends the night on the public library's computers, searching for information about Tina's friend Denise, who disappeared after becoming involved with Russell. The next morning, Angel tells Tina he believes her friend Denise was murdered. As she listens, Tina suddenly spots Doyle's note listing her name and workplace, and, convinced afresh that Angel has been running some scam for Russell, panics and runs. Angel tries to grab her at the building's entrance, but sunlight burns his hand, causing him to vamp reflexively. In stark terror, Tina flees.

Russell finds Tina when she returns to her apartment to pack. She allows herself to be drawn into his arms; Russell vamps and bites her. Angel races to the rescue, only to find Tina beyond his help, marks of vampire bite livid on her throat. Russell meets with a young lawyer from Wolfram & Hart, Lindsey McDonald, to discuss his airtight (if fictitious) alibi in the matter of Tina's unfortunate demise, and orders the lawyer to bring him Cordelia, whom he has selected as his next victim.

Angel tracks down Stacy and interrogates him until he reveals Winters' location, then persuades a reluctant Doyle to help him avenge Tina's death. Excited by her limo ride to meet the Russell Winters, Cordelia is impressed by his ornate mansion. After the butler ushers her into Russell's den, Cordelia promptly spills the story of her life to her seemingly sympathetic host — until she notices the unusually heavy drapes and lack of mirrors, and concludes aloud that Winters is a vampire. Winters vamps and reaches for Cordelia, who pivots toward the door. Angel has scaled the wall at Winters' estate, and blown out a junction box, causing the lights to go out just as Russell captures Cordelia at the top of the stairs. Shielding Cordelia with his body, Angel takes several bullets from Winters' guards as he picks her up and jumps over the rail to land in the foyer below. Evading more gunfire, they stagger out to the convertible and Doyle, who had (stupidly) crashed the convertible into the front gate while trying to help after hearing the gunshots, squeals them all away. At the apartment, Doyle extracts bullets from Angel's torso while Cordelia dresses the wounds.

The next day, Angel stalks into a top floor conference room at Russell Winters Enterprises, where Winters is conducting a meeting with Lindsey and other reps from Wolfram & Hart. Not impressed by Winters' claim that he can do whatever he wants in L.A., Angel asks the CEO if he can fly, then forcefully kicks his executive chair through the floor-to-ceiling windows. Exposed to direct sunlight, a screaming Winters bursts into flame and disintegrates to dust in mid-air. The chair, scorched and empty, smashes to the sidewalk below. As Angel calmly departs, Lindsey uses his cell phone to report that, although the Senior Partners needn't be disturbed just yet, there seems to be a "new player in town."

Back at home, Angel despondently calls Buffy, but when he hears her voice, hangs up without speaking. Later, Cordelia proposes that the three of them get a sign out front and go into the business of saving souls as a team — at least until her "inevitable stardom" materializes. Doyle observes many people in L.A. need help and asks Angel if he's game. Angel stands alone atop a skyscraper, looking out over the bustling L.A. nightscape, and responds, "I'm game." 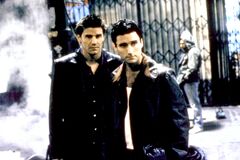 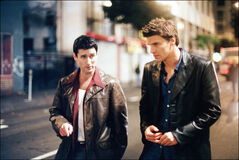 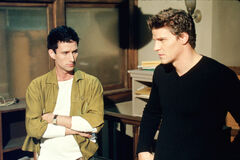 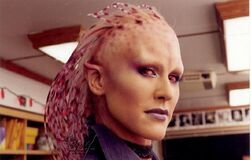 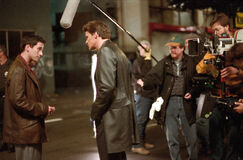 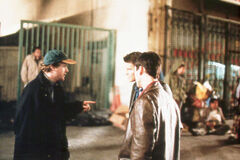 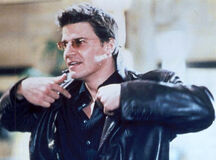 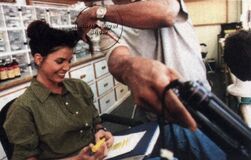 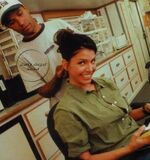