"Choices" is the nineteenth episode of the third season of Buffy the Vampire Slayer, and is the fifty-third episode altogether. Written by David Fury and directed by James A. Contner, it originally broadcast on May 4, 1999 on The WB.

THERE'S NO TIME LIKE THE PRESENT — Since Faith's turn to the dark side seems to have put the proverbial kibosh on Buffy's chances of ever getting out of Sunnydale to go away to college, Buffy decides to launch an offensive and shut down the Mayor's plans for "Ascension." Meanwhile, plans for the future are the order of the day, as Willow tries to choose among a bevy of college acceptances, Xander prepares to hit the road on a Kerouac-inspired adventure and Buffy and Angel refuse to face the insurmountable obstacles to a successful life together.[1]

Mayor Wilkins gives Faith a knife for a gift in exchange for an errand he asks her to handle for him. Buffy and Angel are fighting off vampires at a cemetery. They then discuss their relationship and how it seems to be going nowhere. Joyce finds out that Buffy was accepted to Northwestern University, but Buffy is reluctant to make any plans for leaving because of what she'd be leaving behind. Joyce doesn't seem to be hearing a word of it and goes to call family members in Illinois.

At school, Principal Snyder is on a drug search (even searching a student's lunch in the process). Buffy and friends discuss their college futures and Buffy mentions that she did get accepted to the University of California, Sunnydale so she doesn't have to leave town in order to go to college. Willow on the other hand has been accepted to every school in the country and some out of, including Oxford. Xander has plans to travel around and find out what his future may be since college isn't posing as much of an option.

Cordelia arrives for long enough to insult everyone based on their college futures. Buffy tells Wesley and Giles that she wants out of Sunnydale. The two remind her that its not as simple as just wanting to leave as the Slayer is needed in Sunnydale, but Buffy refuses to be defined by her role. Buffy then decides that, instead of having everyone sitting around waiting for graduation day, they should take the offensive against the Mayor and bring the fight to him. Giles agrees, and they decide that the first order to business should be to find out what the Mayor is up to at the moment.

Later that night, one of Mayor Wilkins's vampire lackeys arrives to meet the box at the Sunnydale Airport, however the courier refuses to hand it over as the Mayor isn't present as agreed. Before he can get too much further, Faith kills the courier with her longbow and takes off his hand to separate him from the box. Buffy watches from the bushes as Faith arrives in a limo and brings the box to the Mayor. After the coast is clear, Buffy attacks the vampire and forces information about the box out of him before staking him.

When Buffy returns to the library, with information about the Box of Gavrok, Giles and Willow bring maps of the City Hall so that they can plan to infiltrate the building in order to take the box from the Mayor. The box, which is being kept in a top floor conference room is protected by magic — which they plan to have Willow handle so they get to the box. Xander is sent off in search of supplies for the Breath of the Atropyx, a ritual that will destroy the box. Wesley is annoyed that no one will listen to him, and feels that they are rushing this too much.

On his shopping trip, Xander spies Cordelia in April Fools clothing shop. He stops in long enough to give her his best comeback to the insults she provided him the day before but she shocks him with her acceptance letters to several very important colleges. That night, Wesley and Giles drop off Buffy, Willow, and Angel at City Hall. Back at the library, Xander and Oz follow Willow's instructions to prepare the ritual to destroy the box.

After Willow performs the spell, she leaves and Buffy gets ready to take the box. Angel lowers her through the skylight to take the box. After she gets the box though, an alarm goes off and the rope gets stuck. Buffy is left hanging as two vampires enter. Unable to get Buffy free, Angel leaps into the fray and the two fight the vampires. After tearing up the conference room, they escape and hide in the bushes while Giles and Wesley cause a diversion.

Mayor Wilkins is extremely angry that they got away with his box, but he suddenly becomes very happy when he finds that Faith has captured Willow. The gang don't find out about Willow's capture until they get back to the library (as each group thought she was with the other) and they're all very upset, especially Oz who sits in silence. Buffy decides that they will trade the box for Willow. Wesley is strongly against it and tells Buffy that she was right to take the offensive against the Mayor, and that by giving up the box they are sentencing all of Sunnydale to death.

Everyone fights over the issue until Oz ends the argument by angrily smashing the pot needed for the ritual. With that, the matter is settled; they'll trade the box for Willow. The gang prepare to make the call.

Willow tries to escape from the room she's locked in, but only succeeds in attracting the attention of a vampire guard. He tries to taste a bit of her blood, but she levitates a pencil and stakes him before he can take a bite. Willow sneaks out of her room and finds the Mayor's office. Inside, she finds the Books of Ascension, which she reads until Faith discovers her. In the ensuing confrontation, Willow launches a tirade against Faith, informing her that, despite her rough life, she had a lot working with the Scoobies, and now that she is working for the Mayor, she is now alone, friendless, and a "big, selfish, worthless waste."

Having been expecting a speech on how it was not too late for her to turn back, Faith is briefly taken aback, but quickly overcomes it and physically assaults Willow before Mayor Wilkins enters and informs them that the Scoobies have negotiated a deal.

The meeting takes place in the cafeteria where the Scooby Gang meet the Mayor and his crew armed with weapons. The Mayor enjoying finally meeting Buffy in person, but Buffy isn't interested in pleasantries and demands Willow be let go.

The Mayor instead gives a speech about how he doesn't think that Buffy and Angel should be together because they don't have any kind of real future together, as she will age while he will stay the same as well as the constant danger of him losing his soul if he feels a moment of happiness. The trade is made, however the smooth transaction is ruined when Principal Snyder shows up with security guards before anyone can leave, expecting to find drugs in the box.

The Mayor then reveals himself to Snyder who quickly apologizes for the interruption, but before he can leave one of the guards opens the box and a large beetle-like creature crawls out and kills him. Another beetle breaks free and the two manage to attack The Mayor and Buffy. Both beetles are killed, one with the knife Mayor Wilkins gave Faith. The Mayor tells everyone that the box contains "about fifty-billion of these happy little critters" and threatens to open it again if Buffy gives him any trouble. He then leaves, box in hand with Faith following behind, reluctantly leaving behind the knife. Snyder, shocked is standing with a chair, holding it like a shield and Buffy asks: "Snyder, you alive in there?"; Snyder furiously asks the gang why they all couldn't be dealing drugs like normal people.

At the library, Willow tells everyone her story. Giles presses Willow for any information she might remember from the Books of Ascension. Willow tells him she doesn't remember much of it, but did see a few pages which looked important... which she then produces, having torn them from the books. Giles gratefully takes them off to research, while Wesley reminds Buffy that the Scooby Gang are now back exactly where they started, with no way to stop the Ascension.

At school the next day, Buffy has accepted that she can't leave Sunnydale understanding that even if Mayor Wilkins is stopped there's always going to be another evil around the corner. Willow reveals that despite being accepted by every college in the country and some in Europe, she's decided to attend UC Sunnydale. Buffy tells Willow she doesn't have to make that kind of sacrifice, but Willow insists that it isn't; she realized when she was being held captive that she wanted to continue fighting against evil and if she's going to continue learning Wicca, there's no better place to be than the Hellmouth. Buffy is touched deeply by her friend's gesture.

Cordelia, meanwhile, is posing in front of a mirror with a fashionable and expensive-looking prom dress. The scene is upended, however, when her manager approaches and tells her to get back to work, revealing that Cordelia is not shopping; in spite of Xander's jibes about her father's money, she has been forced to take a menial retail job.

That night Buffy and Angel talk about what the Mayor said about their relationship. They both insist that he doesn't know what he's talking about, but both can't help but feel that his words had a chord of truth about them. 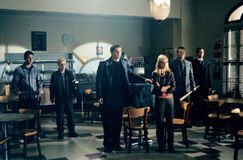 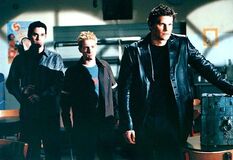 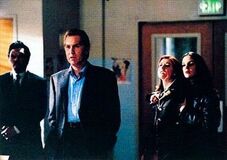 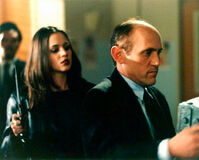 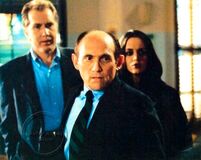 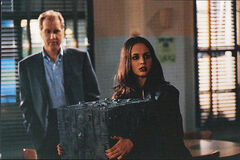 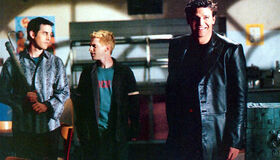 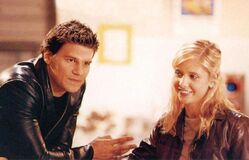 "Tonight, Buffy must choose... to save Sunnydale or her best friend."
Add a photo to this gallery

Retrieved from "https://buffy.fandom.com/wiki/Choices?oldid=220367"
Community content is available under CC-BY-SA unless otherwise noted.