"Checkpoint" is the twelfth episode of the fifth season of Buffy the Vampire Slayer and the ninetieth episode in the series. Written by Douglas Petrie and Jane Espenson, and directed by Nick Marck, it originally broadcast on January 23, 2001 on The WB network.

BUFFY vs. WATCHER'S COUNCIL — The Watcher's Council arrives in Sunnydale demanding Buffy pass an exhaustive review of her slaying skills or they will withhold critical information about Glory and have Giles deported back to England.[1]

The Scooby Gang gather at Buffy's house to discuss the Council's plans to come to Sunnydale, which Buffy isn't happy about. She recalls that her two previous experiences with the Council put her life in serious danger, and wishes that they would just give her the information she needs without making the trip to Sunnydale.

Glory is at her mansion, panting, sweating and in obvious pain. Dreg and another one of her minions rush into the room to her aid, bringing along with them a hysterical mailman. They carry her to the crying man and help her put her fingers to his temples to drain away his sanity. She gets up, refreshed, and the disoriented mailman wanders away. The other demon warns her that she has even less time now to use the Key, but Glory isn't worried. She explains that if Buffy is the only obstacle between her and the Key, she won't need much time at all.

Quentin Travers and a team of Watchers arrive at the Magic Box. They disrupt the business, sending paying customers home, and criticize Giles' handling of merchandise. They announce that the Magic Box will be closed for the duration of the Council's stay in Sunnydale. Giles is frustrated and takes an antagonistic position and then learns that the Council plans on conducting an extensive review of Buffy's her methods, skills, and abilities. Quentin announces that they have information on Glory but won't reveal it until Buffy has been comprehensively tested and she proves she can handle the information.

In Buffy's history class, the teacher is discussing how Rasputin was considered nearly impossible to kill. Buffy challenges the professor to look at the history from a different angle, but he shoots her ideas down with scathing criticism and sarcasm, embarrassing her in front of the entire class. That night, Buffy complains about her class to a vampire she's fighting, until she is thrown off balance. Spike suddenly appears, flying over a tombstone to tackle and stake the vampire. He expects gratitude from her, but Buffy tells him he is getting in her way. As they begin discussing, he accuses her of not being able to keep a man.

Quentin informs Buffy and Giles that she must pass the review or he will shut down the shop and deport Giles. Buffy and Giles realize that they must cooperate with the Council, which is powerful enough to carry out all its threats. Buffy worries that she may fail, placing everyone in even greater danger.

Council members interview the rest of the Scooby Gang, including Spike, for information about the Slayer. Lydia interviews Spike and she reveals she wrote her thesis on him. With the exception of Spike (who declares her to be "slipping" because she "can't keep a man"), they all try not to incriminate Buffy in any way, and each tries to justify his usefulness to her (without making it sound like Buffy actually needs help, of course). In the training room, Buffy is blindfolded and her fighting skills are tested against one of the Council members, but she does not pass the test.

Upon returning home, Buffy finds Glory in her living room. After Dawn sees her and departs, Glory openly threatens to kill Buffy's loved ones and friends and force her to watch her do so. Visibly disturbed, Buffy takes Dawn and Joyce to Spike for protection. Although Spike initially protests the sudden increase of responsibilities, he agrees to look after them. After a moment, Joyce and Spike discover their shared interest in soap opera and sit down to watch it together.

On her way to the shop to meet with the Council for a comprehensive review of her plans and strategies, several well-armed men wearing medieval fighting gear attack Buffy. She takes them out and discovers from the last conscious one that they are the Knights of Byzantium and are in town to destroy the Key. They consider her their enemy because she protects the Key.

Buffy returns to the shop and informs Quentin that she is not going to deal with the review anymore. She now knows that she holds power against both Glory and the Council because they both need something from her: Glory needs to know where the Key is, and the Council needs her to make their jobs meaningful. She delivers an authoritative speech justifying the participation of each of her friends and demands that Giles be reinstated as her Watcher (receiving retroactive pay from the month of his dismissal). She finally instructs the Council to give her the information that she needs.

Quentin reluctantly agrees to her terms. Buffy asks Quentin to start by telling her what kind of demon Glory is. Quentin corrects her: Glory isn't a demon. She's a god.

Anya: "And when I was seven, I had a pet dachshund that died from choking on a wiener, which I find ironic."

Lydia: "You can't hurt anyone?"
Spike: "That's right."
Lydia: "But you are a vampire."
Spike: "If I'm not, I'm gonna be pissed about drinking all that blood."
Lydia: "So it's this chip in your head that keeps you from hurting people."
Spike: "My goodness, you put that together all on your own? That's right. Leastways that's what I've got 'em all believing. Could just be a hoax, though. I fake some headaches, everyone gets used to poor helpless Spike. Then one day, no warning, I snap a spine, bend a head back, drain 'em dry. Brilliant."
Lydia: "The chip. Assuming it exists. It takes away the… ability. But it leaves… leaves the…"
Spike: "Desire? Yeah, I've got tons of that." 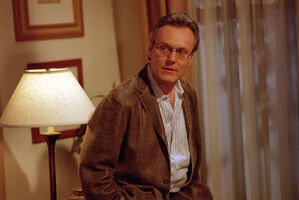 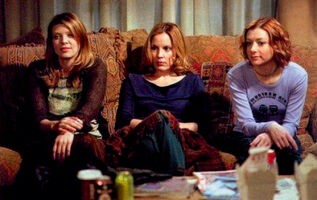 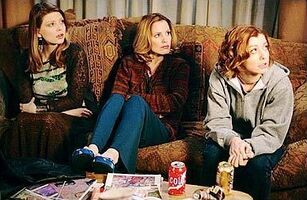 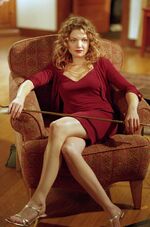 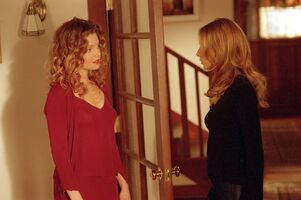 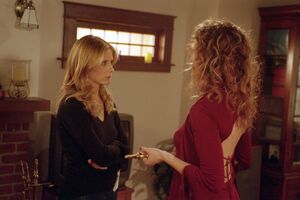 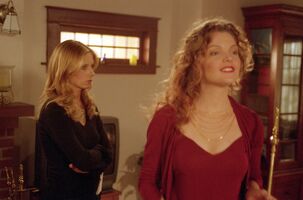 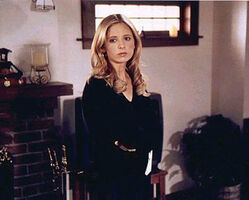