Cemetery of Lost Love is the twenty-eighth issue of the Buffy the Vampire Slayer Classic comic book series. Written by Tom Fassbender and Jim Pascoe, and illustrated by Cliff Richards, it was originally published on December 27, 2000 by Dark Horse Comics.

Buffy's used to dealing with a lot of weirdness in her role as the Slayer, but what's she to make of a backpack full of maggots? How about a herd of rats that overrun the cafeteria just as she's sitting down to eat? If Buffy didn't know any better, she'd think someone was out to get her. But who could possibly be upset with a vampire slayer?[1] 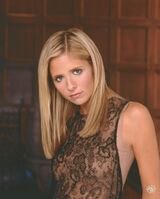 Retrieved from "https://buffy.fandom.com/wiki/Cemetery_of_Lost_Love?oldid=235063"
Community content is available under CC-BY-SA unless otherwise noted.