"Buffy vs. Dracula" is the season premiere of the fifth season of Buffy the Vampire Slayer television show, and the seventy-ninth episode in the series. It was written by Marti Noxon and directed by David Solomon. It was originally broadcast on September 26, 2000.

Buffy faces the infamous Count Dracula, who had come to Sunnydale to meet her and make her one of his brides.

Unable to sleep, Buffy goes out to patrol the cemetery and after staking a vampire, she returns to bed with Riley. The next day, Buffy and Riley play catch at the beach with the others watching, until Buffy "slays" the football (in Riley’s words). Xander tries to ignite the barbecue but fails. Willow magically ignites the barbecue, but immediately a sudden storm forces them all to seek shelter from the rain. Meanwhile, two men deliver a large crate filled with dirt to a residence, but when they drop it, a clawed hand breaks through the wood and attacks one of the men.

Giles has Willow begin scanning books so that they can be resources for the gang to use. He then announces that he’s going back to England because it seems he’s no longer needed by Buffy nor the Scoobies. Buffy has dinner with her mother but ends the meal quickly by announcing she is going out to patrol. Joyce remarks that she will have to get used to the house being empty and quiet again.

While patrolling, Buffy is confronted by a vampire who condenses from a mist and introduces himself as Count Dracula. She is flattered when he tells her she is known throughout the world, but discomforted when he says her power is rooted in darkness. When she tries to stake the legendary vampire, he disappears. Xander and Willow arrive to see Dracula before he turns into a bat and flies away. The women discuss how amazing Dracula is, and Riley and Xander both express their jealousy towards the infamous "Dark Prince." Willow makes a lame attempt to attract attention to Giles and his usefulness, but the gang seems oblivious.

As Xander is walking home alone, he encounters Dracula. Using his mysterious hypnotic charms and promises of immortality, the vampire persuades Xander to be his emissary and lure the Slayer to him. Riley interrogates Spike about Dracula, but the former commando is warned that although Dracula is mostly show and tricks, he is too dangerous for Riley to take on alone.

Buffy awakens to find Dracula in her bedroom. She is helpless against his powers and unable to stop him from biting and drinking from her. Upon waking the next morning, Buffy looks in the mirror and sees the puncture marks on her neck. She hides them with a scarf.

While munching on donuts, the gang discusses their plan of attack. Buffy seems distracted and after hearing about the truths of Dracula, she leaves abruptly. Riley follows her and forces her to take off the scarf to show the puncture marks on her neck. Everyone is shocked to see that she has been under the control of Dracula. Since Xander is also under Dracula’s power, he has a strange hunger for spiders and attempts to defend the powerful vampire to his friends. Xander volunteers to have Buffy stay safely at his place. Willow and Tara use magic to protect the Summers’ home, and Giles and Riley go after Dracula. Anya complains about not going after Dracula herself until Xander locks her in the closet. Xander takes the willing Slayer to his "Master" in hopes of getting immortality in return.

After being left alone with Dracula, Buffy tries to take control and stake him, but he is easily able to make her put the stake down. Riley and Giles discover Dracula’s castle, remarking how they’ve never noticed it before, and enter carefully. Dracula talks to Buffy of all the things he will do for her while she struggles to regain control of herself.

Xander tries to stop Riley from going after Dracula, but Riley quickly knocks him out. Giles finds himself victim to the Three Sisters, who effectively keep him distracted. Dracula offers his blood to Buffy, and she hesitantly takes a drink.

A flash of memories allows Buffy to break his control over her. Riley rescues Giles from the sister vampires, and they go to save Buffy. Buffy and Dracula fight in a vicious battle, and finally, Buffy stakes him. After they leave, Dracula comes back from the dust. Buffy is there and stakes him again, knowing he would come back. Dracula attempts to re-form again but is reminded by Buffy that she is "standing right here". He slips away in his mist form.

Giles calls Buffy, preparing to tell her about his plans to leave however she says she wants to talk to him as well. Letting her go ahead, Buffy tells Giles that since her encounter with the spirit of the First Slayer she’s been wondering about where her power comes from and what it means to her inside as she feels that if she knows then she can become stronger as a result. She asks Giles to be her Watcher again, to train and teach her about what her power truly means. Giles is pleased and decides to stay in Sunnydale.

Buffy comes home and announces to her mom that she’s going out with Riley. As she enters her room, she finds a girl there going through her stuff. Joyce tells Buffy that she should take her sister with her if she goes out. Buffy and Dawn turn and, in annoyance, call out: "Mom!"

Buffy arms herself with a lit torch, when Giles and Riley burst into the room.
Dracula: (sends Buffy one final look full of pain and fury) "What a shame. You could have been great, you know." (He jumps out of the window, changes himself into a wolf and lopes into the dark woods).

Dracula: "I know intimately what it is to be different. Human, but not quite... Of the world but still an outsider... You see? We understand each other. Both of us are born of darkness, masters in the art of death-"
Buffy: "No. Hold it. Enough with the darkness. I’m born of Joyce, pal." 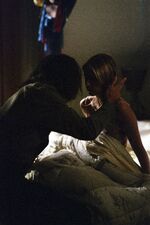 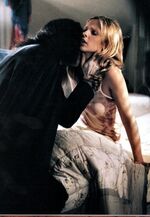 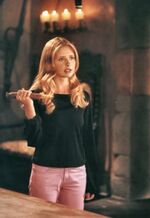 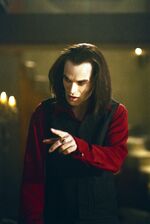 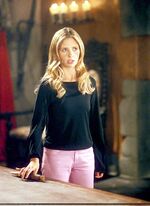 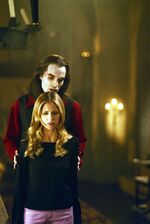 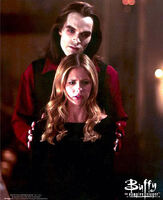 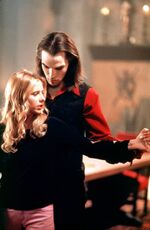 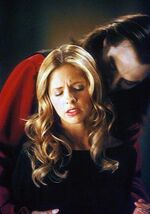 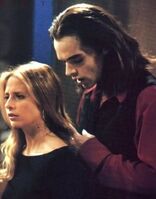 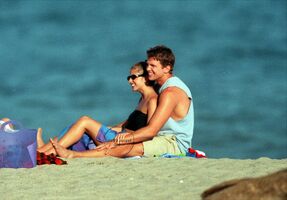 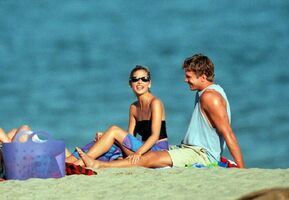 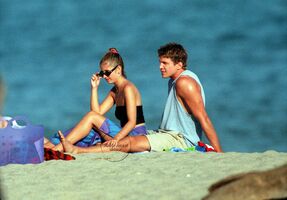 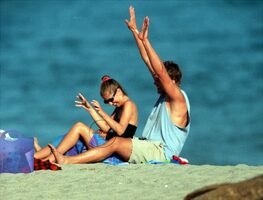 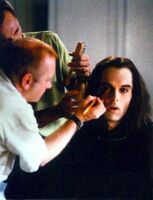 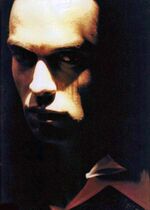 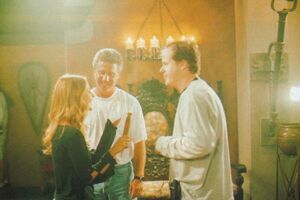 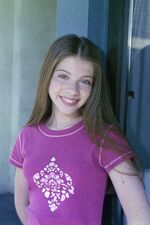 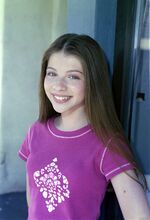 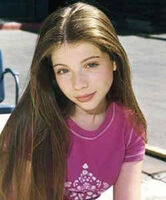 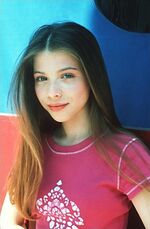 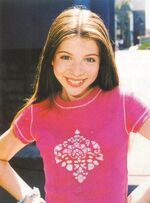 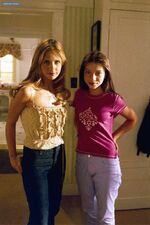 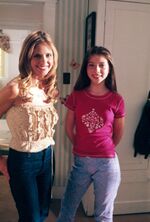 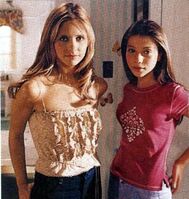 “Season premiere event: They were destined to meet. Dracula & Buffy”
Add a photo to this gallery

Retrieved from "https://buffy.fandom.com/wiki/Buffy_vs._Dracula?oldid=192419"
Community content is available under CC-BY-SA unless otherwise noted.